Cosmic soup glow anomaly 'weirder than we ever thought'

Top international boffins poring over a newly-produced sky map of the microwaves released when the entire universe exploded into being out of soup have confessed themselves baffled by a mysterious "cold spot" on the chart whose existence today's science cannot explain. 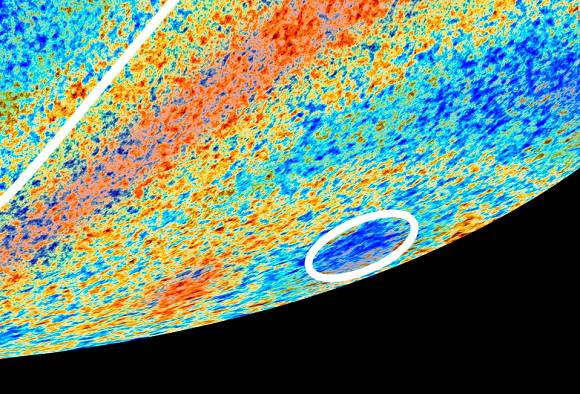 The map in question has been produced by taking the first 15 months' worth of data from the European Space Agency's Planck probe-scope positioned at the L2 Earth/Sun Lagrange point 1.5 million km away in the vasty deeps of space. Planck has scanned the entire sky, and advanced boffinry has been used to purge its imagery of light emitted by such stuff as stars, galaxies etc.

What is left is the ancient light emitted as the universe was formed, from soup. According to the ESA:

The young Universe was filled with a hot dense soup of interacting protons, electrons and photons at about 2700°C. When the protons and electrons joined to form hydrogen atoms, the light was set free. As the Universe has expanded, this light today has been stretched out to microwave wavelengths, equivalent to a temperature of just 2.7 degrees above absolute zero.

But what's really set the cat among the cosmological pigeons is that the map has things on it that can't be explained.

In particular, it seems that one half of the sky is better lit up than the other, and nobody at the moment can explain why that should be. Also, one bit of the sky - shown in the pic - is simply much colder than theory can account for. The ESA says:

An additional peculiar element in the data is the presence of a so-called 'cold spot': one of the low-temperature spots in the CMB extends over a patch of the sky that is much larger than expected.

"The Universe seems to be simpler, but at the same time, also weirder than we ever thought. The anomalies in the CMB are telling us something fundamental: we do not know yet what this is," explains Jan Tauber, a top Planck boffin at the ESA.

So it would seem that the best available theory known to physics can't account for everything: situation pretty much normal for physics, then.

There are more details from the ESA here, and full-fat boffinry here (we recommend the use of some type of sturdy reinforced hat to prevent brain explosion). ®

European Space Agency: Come on, hack our satellite if you think you're hard enough

European Space Agency whittles wannabe astronauts down from 23,000 to 1,391