Earlier this week, we published results of some tests on the proposed heater for our Low Orbit Helium Assisted Navigator (LOHAN) rocket motor heater, designed to keep the Vulture 2 spaceplane's powerplant toasty at altitude.

We also invited our tech-savvy ballocket mission fans to suggest just how we might link the heater to its LiPo battery, to ensure a snag-free release when the time comes for the Vulture 2 to blast heavenwards off its launch rod.

To summarise, the battery will sit in the the electronics enclosure of our fantastical flying truss, so we need a method of hooking it up to the heater cables in a way that will survive the potentially rough ascent, but not offer too much resistance when the explosive climax arrives.

Sure enough, you weren't short on ideas, and thanks very much for your input. Let's have a look at the possible solutions:

The simplest method involves using wire that is thin enough to snap when the rocket motor fires. We'd already thought of that, but LOHAN team member Neil Barnes found that 29 SWG (0.345mm) wire requires 1,500g to break it. He also tried some lead-free solder, to see how that stood up, eyeing the possibility of a solder joint "weak point" in the wiring. Said solder can take 700g before snapping. Both these results are "still too high", Neil reckons.

Cons: Difficult to assess/test under simulated mission conditions. Could restrain aircraft on launch. Heater cables trailing from aircraft after launch. After launch, exposed wires from LiPo battery could cause hazardous short-circuit.

So, why not use the rocket exhaust to burn through the connection - either the wires themselves or something with a lower melting point? Copper melts at 1084.62°C, we're reliably informed, and since we'd expect APCP exhaust gas to hit >1000°C, it's not a bad plan.

Here's an alternative, from commenter All Over: "How about passing the wires behind the motor where the ends are joined using wax to hold them together that 'instantly' melts/burns away to separate the two ends. Obviously the thickness would need to be rated to avoid resistive heating within the wire avoiding premature separation."

Gary Bickford favoured "fuse wire, in the path of the exhaust", or "perhaps even a length of solder".

Phil O'Sophical opined: "Use foil strip and pass that behind the exhaust. It should melt rapidly. In fact, foil with a small notch cut each side should just tear apart as LOHAN's powerful drive thrusts its slim body along the supporting member to penetrate the unknown void..."

Cons: Difficult to assess/test. Heater cables trailing from aircraft after launch. After launch, exposed wires from LiPo battery could cause hazardous short-circuit.

Expanding on the fuse wire idea, The First Dave suggested using "a short length of fuse-wire in the right place, and a circuit that is capable of providing the required overload". He added: "Even if your burn-out circuit fails to fire, fuse-wire is so soft that it should break anyway once the rocket motor fires."

So far, we haven't had a mention of any pyrotechnic compounds, so here's cap'n to rectify that: "Wrap the wires in Thermate-TH3 or another incendiary, kind of like using thermite but a much lower ignition temperature. Rig up a fuse that can be triggered electrically shortly before your rocket release.

"You don't want to rely on the rocket plume to trigger the break in the wires, because it might not hang around long enough to provide heat to do the job - and you'll end up with wires still connected.

"Triggering electronically gives you far more control on timing, and a good incendiary means you can have decent sized insulated wires that aren't going to break easily, but still cut through them in short order when you need to."

Here's an interesting one involving a transformer, courtesy of David Pollard: "It would only require a few components to make something like an isolating power supply, running at 40 kHz or so, with each of the two transformer coils in separate halves of a ferrite-cored transformer. The two halves could be held together by Vulture 2's weight if they were to be mounted on the rubber pad at the end of the titanium rod."

Martin Budden, evidently concerned we'd strayed too far from the path of sheddish righteousness, voted for an, er, off-the-peg fix: "This is a back-yard shed project, right? Hold the stripped ends of two wires together with a clothes peg: enough squeeze to hold the wires in contact with each other, loose enough that the wires will pull out easily when LOHAN launches, and exactly the right amount of shed-bodge-ness."

Peggish tomfoolery aside, there are plenty of options for a mechanical connection, as you were eager to point out. Choices include 2.5mm jack, wall wart connector, "spring loaded pins pressing against metal pads" (according toWize), and braided brushes.

On the other hand, consider the solution proposed by Alan Drury, who kindly took the time to send us a sketch: 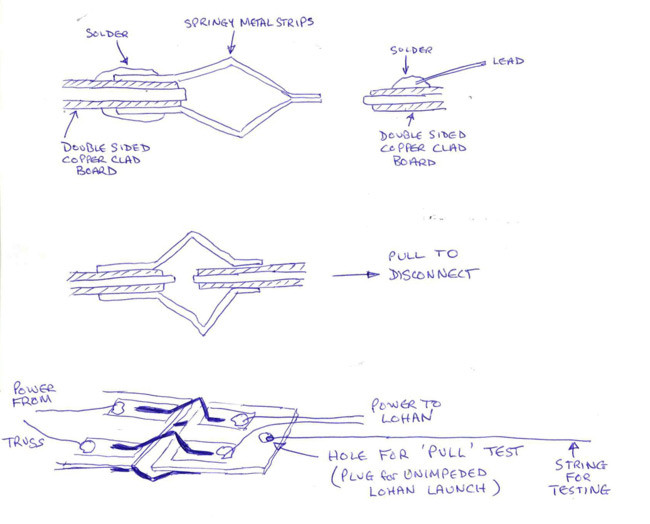 Pros: Completely robust hook-up. Assuming one side of connector mounted on aircraft, clean disconnect, with no wires trailing from aircraft.

Quite a few of you displayed scientific magnetism, including Pet Peeve, who proposed: "A neat little trick is to solder a flat metal tab onto the ends of two pieces of wire, and then hold together the tabs by sandwiching them between two rare-earth magnets, the size of the magnets determining the force to pull the tabs apart.

"If you are worried about shorting against something, paint the tabs with liquid electrical tape to insulate them."

Offering an alternative take on the mechanical linkage concept, Your Opinion Matters pitched Apple MagSafe connectors - a pretty nice ruse although we'd be restricted to whatever separation force is required for that fruity hook-up.

Mr Peeve's observation that we could change the size of magnets on a proprietary system leads us nicely to the final offering from LOHAN regular TeeCee: "A couple of steel contact patches on Lohan's [= Vulture 2's] skin and a pair of wires from the external power pack ending in small magnets should do the trick.

"The slight drag on detachment should not be an issue if you ensure that the wires are short enough that this will occur while the spaceplane's still travelling along the launch rod so the trajectory cannot be affected."

Pros: Simple to implement. Clean disconnect, with no wires trailing from aircraft.

Cons: Connection could restrain aircraft on launch, if magnets are too powerful.

Well, we like the magnet plan. It's easy enough to mount the aforementioned steel contact patches on the aircraft's exterior, and if we get various small magnets, we can balance the set-up for connection robustness versus disconnection force by simply changing the size and/or strength of the magnets.

A quick shufti online located a budget pack of nickel-plated neodymium micro disk magnets ranging from 1mm diameter, with a pull force of 25g, to 6mm, offering a pull force of 1.3kg.

So, we'll get onto it, and while we do that we invite your comments as to the sheer brilliance of the idea, or as to why the wheels will quickly fall off it, with catastrophic results. ®

who, me? No crypto needed, just a project with a tough deadline that nobody minded missing
Software5 Dec 2022 | 4

Hosting company has nothing to say on data loss, restore times, or root cause
Security5 Dec 2022 | 3