To argue that the electric car has already failed is farcical. To date only one mass-market EV from an established car maker has been launched in the UK: the Nissan Leaf. Even I’m not fully convinced by the Leaf. I think it’s too big, too ugly and too expensive. A revised, cheaper, longer-range Sunderland-built model will address some of those failings, but I can’t see it changing my essential feelings towards it.

No, in my opinion the only two cars that will fly the flag of the e-car in a convincing manner in 2013 are Toyota’s Prius Plug-in hybrid and Renault’s new Zoe BEV. If in two years’ time global sales of these two are still piss poor then, and only then, will I discuss the “failure” of the e-car. 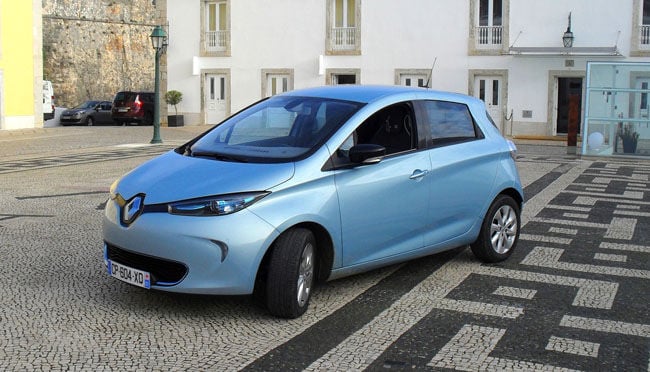 Renault's Zoe: bang up to date

My initial impressions of the Zoe were gathered over the course of a two-day test in and around Lisbon on roads that looked like they had last been repaired just before the Romans pulled out. Naturally this also meant I was driving a left-hand drive car so I can’t guarantee the ergonomics of the right hookers we’ll get in the UK.

The Zoe is based on the same shared Nissan-Renault platform that underpins the new Mk. IV Clio. So everything is bang up to date and as safe as any other car in its class right down to the five-star Euro NCAP rating. The platform should also be a clue that the Zoe is a size smaller than the Leaf: a largish B-class rather than a C.

For drivers, the good news is that out on the open road, despite only having a 65kW (88bhp) electric motor, the Zoe feels both quick and responsive. More importantly it feels light and agile which is quite an achievement when you remember that there is a 290kg battery pack slung beneath the cabin. 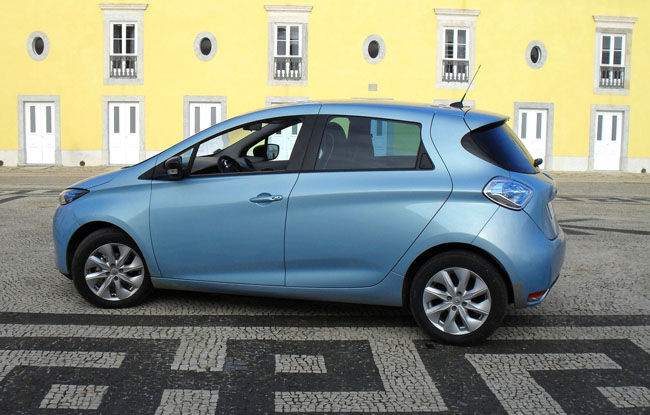 The top speed may be limited to 84mph but the Zoe accelerates up to it briskly with no fuss or drama. The actual 0-62mph scamper takes 13.5 seconds but in real world driving the 220Nm (162 lb-ft) of torque that’s available from the off makes it feel faster than that.

Compared to the driving experience of the Renault Fluence or the Nissan Leaf, the Zoe is a big step forward. It’s just so much more fun to throw around the bends. It’s also completely silent. There’s not a hint of motor whine and road noise is well suppressed. Even by EV standards this is a very refined car.

While silence may be golden for the occupants the same is not true for pedestrians, and certainly not the aged, the hard of hearing or the plain inattentive. With this in mind the Zoe can generate three different sounds when under low -speed acceleration, any of which could double as the sound of a starship’s drive engines in a budget sci-fi movie. 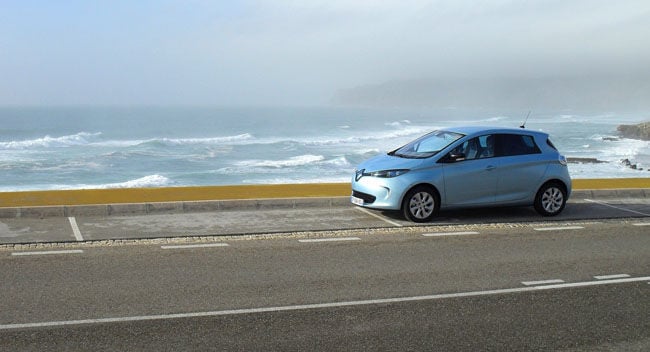 One small EV, one huge ocean

Unlike the visually challenged Leaf, the Zoe looks as good as it goes. Sharing a clear family identity with the new Clio it strikes an appealing balance between contemporary small car chic and EV futurism. In my opinion it’s one of the most interesting cars on the road alongside the Citroën DS3.

Like the Clio, the Zoe is only available as a five-door, but the rear pair are designed to be as close to invisible as possible with the handles hidden away in the C-pillar. The curious ridged pattern on the door catches is the thumbprint of the Zoe’s designer, Jean Sémériva.

Inside the cabin, the crisp and modern design ethic is continued, though I struggled to see the supposed influence of the shape of a wind turbine blade in the design.