Jodrell Bank: The visitors' centre at the start of the universe

One nuke or two 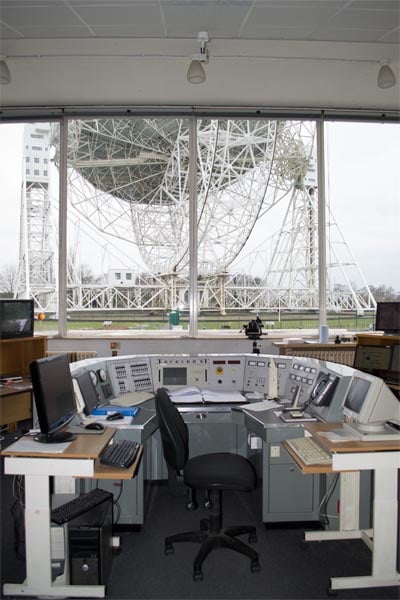 All in all, it's a reassuringly familiar place to contemplate other worlds. Or to ponder the end of this one. Jodrell was the front line of the UK’s nuclear defences before Fylingdales, and O’Brien points out that received wisdom for staff joining in the '80s was that there were still two Russian nukes trained on the site - and an American one, just in case it looked like the Russians had a chance of taking the site intact.

Snap out of Cold War nostalgia, and a closer look at the control room reveals an eclectic mix of cutting edge and seriously vintage kit. On one side some seriously large flat screens were showing the dashboard for the eMerlin array. Everything was reassuringly green when we were there.

Across the room was a Compaq PC with some cannibalised HP CD drives which is used to monitor the onsite power generator. While the telescope sucks its juice from the national grid, if a power cut coincided with excessive wind at the site, the generator would kick in to allow the dish to be shifted into a position where it wasn’t likely to takeoff into orbit itself.

Another rack shows the time according to both GPS and the station's own atomic clock. Splitting these gives you Jodrell time. (This after already adjusting our watch for both Earth and Venus time in the cafe.) In the next rack was a wood and brass hygrometer. While the same info is available on a screen in the control desk, sometimes scientists just seem to prefer paper and wood, says O’Brien. 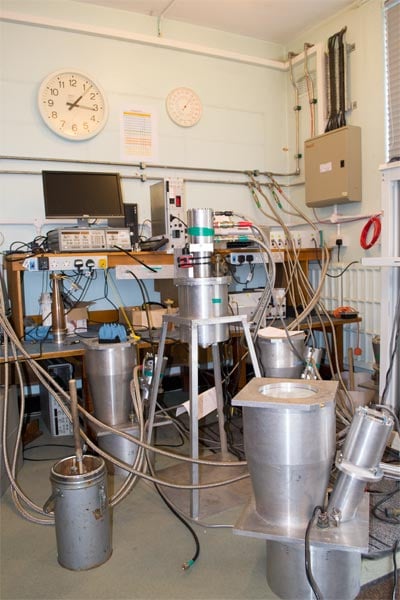 Walk up close to the veteran control desk itself and you see a much more up to date array of flat panels controlling the movements of the telescope, though an old Vax terminal on the far right shows that this is an academic institution with heritage, and the urge to recycle. The Vaxes are near the end of their useful life for the site, said, O’Brien, if only because of the scarcity of parts.

Talking of maintenance, a walk down the corridor - through numerous numberpad-sealed doors - took us to what looked like the ultimate garden shed. On one wall of the room is one of the most impressive arrays of wrenches we’ve seen outside of a KwikFit Centre. In the corner, you’re treated to the sight of one of the scope’s receivers hooked up to a life support system that uses helium to chill it down to the desired operating temperature of -260°C. Time almost slipped again here - the combination of the chemicals and the metronome regular pumping could easily have transported you back to the Madchester of the 1990s.

How cool is that?

A step further down the hall to the correlator would bring you sharply up to date. This is the two-rack machine that pulls together the feeds from the seven telescopes that make up the e-Merlin project, a task that keeps it ticking over at a brisk 1 peta ops per second. This would put it in the top 30 supercomputers in the world, but it isn’t strictly a general purpose supercomputer. 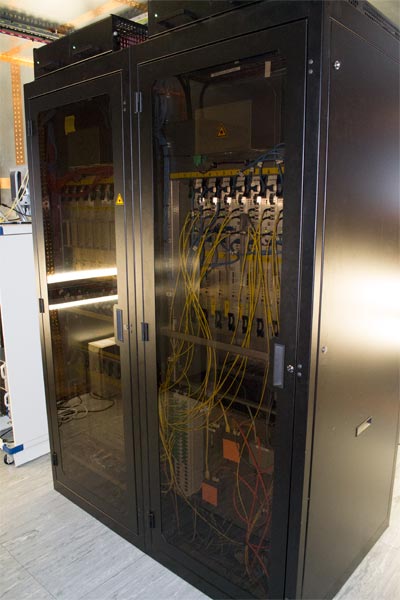 The correlator pulls in the feeds from all seven telescopes in the e-Merlin project.

Incidentally, if the pic on the right makes it look like it’s in an enormous biscuit tin, that’s 'cos it is. It’s situated a few hundred feet from the main dish, and so to ensure it doesn’t overwhelm the signals the dish is targeting, the correlator is enclosed in a box made of metal panels, with copper sealing the joints. Essentially it's a rather large, very noisy Faraday cage, throwing out around 1TB of data daily to be turned into astronomical images.

Feeding a beast like this requires huge amounts of data, drawn in from the optical network linking the stations that make up e-Merlin. The data used to be transmitted over radio links, but is now sucked into the site via a fibre-optic network, which includes 600km of pre-existing dark fiber and 90km of new fiber. This network allowed Jodrell to boost the sensitivity of the receivers by a factor of 20. This means it feeds the correlator at 210Gbps. Remember, that’s a G. The UK public internet current tops out at around 1Tbps, meaning eMerlin alone is running at around a fifth of the UK’s internet data. Put another way, O'Brien says on many projects the team can do in a day what used to take a year.

One further fact. The signals from the various telescopes have to be synced - this is done to an accuracy of 1-2 picoseconds. 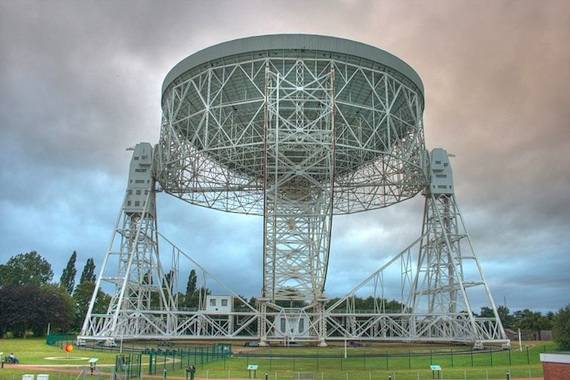 With the site heading up the Square Kilometre Array project, the computing horsepower at Jodrell - and its sister site at Manchester - will be racking up its kit list as more physicists work their way up the M6 and settle onto the Cheshire Plain.

Sadly we didn’t have time to check out the SKA building, or to rummage around in the older buildings which house old labs, hand-tooled Ferranti era computers, and the site’s hydrogen maser.

Even so, we were still 40 minutes late getting to the car park to meet the family. But at least we had the excuse of not knowing which time it was. ®

Around six miles from Jct 18 on the M6, just off the A535 between Holmes Chapel and Alderley Edge.