It's all about speed – processing speed, that is

One requirement for keeping Ng-Thow-Hing alive, of course, is making sure that an augmented-reality interface operates in real time. "If you think about something that differentiates computer vision for ADAS and computer vision for other areas, you can think of stability and robustness and functionality," said Victor Eruhimov, CTO of the Nizhny Novgorod, Russia–based computer-vision company Itseez. "But another key factor is the speed."

ADAS tasks, Eruhimov emphasized, must run in real time, and they must run on embedded systems. Other embedded tasks such as robotics – another area in which Itseez has been active – aren't as dependent on real-time activity. "And it's challenging to be real-time in the embedded environment," he said. "Their resources are really limited compared to desktop and server environments."

Hardware-software efficiency is obviously key to real-time performance, he said, and to the rescue comes the soon-to-be-released OpenVX hardware abstraction layer from the Khronos Group, which is aiming for provisional specification in the first half of this year, with the final specification to come in the second half of the year.

According to the Khronos Group, "The Khronos OpenVX working group has been formed to drive industry consensus to create a cross-platform API standard to enable hardware vendors to implement and optimize accelerated computer vision algorithms."

The working group, Eruhimov explained, is primarily targeting mobile and embedded use cases such as computational photography, augmented reality, and automotive applications such as ADAS. One of OpenVX's goals is to transparently support the use of the parallel-processing powers of a GPU to accelerate image processing.

OpenVX, by the way, is intended to be a hardware and software acceleration supplement to, and not a replacement of, the industry-standard, cross-platform OpenCV computer-vision library that was originally introduced by Intel in 1999 and is now freely available under a BSD license. 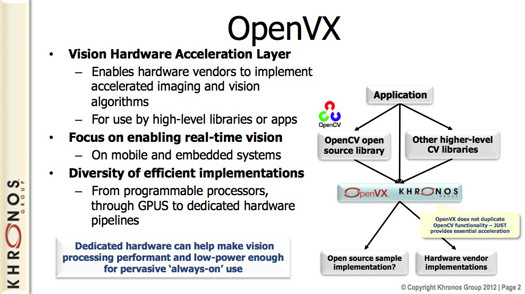 Although OpenVX is still under development, Itseez has already managed to achieve some impressive ADAS results using just OpenCV and a single-core Nvidia Tegra–based embedded system – namely, the ability to recognize US, European, and Russian street signs captured by a camera behind a vehicle's windshield.

Itseez's system scans the entire field of vision of a moving vehicle and extracts sign information from the scene in real time. Although it's a somewhat primitive proof-of-concept effort, able only to recognize speed, stop, and yield signs, it works quite well in low-contrast situations, in bad weather, and when a sign is partially occluded by, for example, tree limbs.

The current system runs strictly on a single CPU core of a Tegra's ARM Cortex-A9. "When we go to a CUDA-enabled GPU," Eruhimov said, "we get a 6X boost on embedded systems, and when we're allowed to use four cores, we'll get full scalability – a 3X speedup."

If the current single-core, no-GPU, no-CUDA system can recognize three street signs in real time, the addition of those speed-ups – plus, of course, more powerful CPU and GPU cores – will bring sign-recognition to much higher levels of functionality. Add text-to-speech capabilities and pedestrian detection, and ADAS systems with such powers could be quite versatile, indeed.

So what's the future of these ADAS systems, and what's holding them back from becoming standard equipment on all new cars? According to Ian Riches of Strategy Analytics, that day is coming sooner than you might think.

"If you look at actual growth rates" of OEM spending on the development of automotive electronic systems from engines to chassis to security and more, "these advanced driver assistance systems are the second fastest growing area" between 2012 and 2017, Riches said. 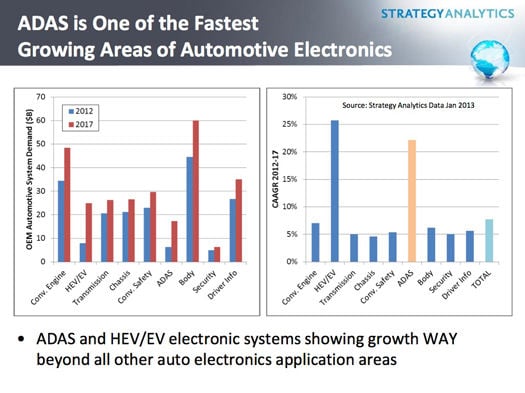 Want to invest in automotive electronics? ADAS looks to be a good bet (click to enlarge; source System Analytics)

The only area that's projected to grow faster is hybrid-electric and electric systems. "But if you pin me down and say, 'Which of those forecasts are you most confident will hit those high growth rates?" Riches said, "I'll say the ADAS – there's much higher uncertainty as to the HEV/EV, particularly when you move to the EV end of that."

There are a number of reasons for the projected explosive growth of ADAS, he said: governments worldwide are demanding safer vehicles, consumer interest is growing, and prices are dropping to such a degree that the cost of ADAS systems is approaching the hundreds of dollars, not the thousands that they currently cost.

Automakers are also becoming more flexible in their packaging of ADAS systems. "It used to be that if you wanted some of this stuff, you had to take the five or eight-thousand dollar 'technology pack option'. Yeah, that's kind of a steep ask, isn't it?"

Riches also said that consumers are easily seduced by ADAS features, using the head-up display as one example. "Once they've tried it, they love it." BMW's head-up display, he said, had a 99 per cent uptake rate once a car buyer gave it a go – admittedly a well-heeled car buyer looking at a top-end bimmer, of course, but that's still an exceptionally high uptake rate.

By 2019, Strategy Analytics projects that OEMs will spend over $20bn on ADAS systems, ranging from simple ultrasonic backup warnings all the way up to head-up displays and night-vision capabilities. "A significant chunk of change," Riches said – though he didn't have must respect for the latter capability. "In general," he said, "if you're looking to spend money on improving your night vision, buy a better headlamp system, not a night-vision system – apologies to any night-vision system vendors here." 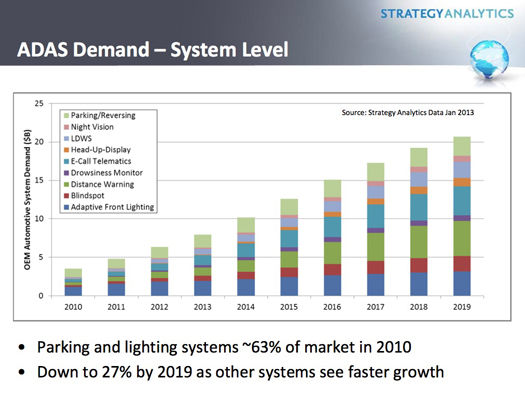 By 2019, a wide range of ADAS functions should cut down on car wrecks (click to enlarge; source System Analytics)

Riches admitted that Strategy Analytics' projections are quite "rosy." But what are the barriers that might suppress this growth? For one, he said, a disastrous, public failure of an ADAS system – but that has yet to happen. To illustrate the kind of bad press such an event could engender, he displayed a slide with a Reg article entitled "Satanic Renault takes hapless French bloke on 200km/h joyride".

That article was all over the European press, he said, but he chose The Reg's coverage to highlight because "This is a tech blog in the UK that's quite well known and is slightly more humorous than some, which is why I picked it up, because I tend to like the humorous approach to life," he said.

So do we, Mr. Riches – and thanks for the plug.

Humor is all well and good, but Riches noted that ADAS systems are making what he called "significant interventions" in a car's operations, commanding brake actuations, steering interventions, and the like. "There is great potential for getting it wrong in a big way that could ultimately hurt people," he said.

And that will happen, he said. "Statistically speaking it's bound to happen at some point." And when it does, ADAS uptake will suffer.

To ensure that ADAS systems help rather than distract drivers and cause catastrophic accidents and their inevitable bad publicity, Riches agreed with Honda's Ng-Thow-Hing that driver-assist systems have to be carefully crafted. They also need to provide information to the driver is subtle ways. "I don't know about you," he said, "but if I'm getting slightly too close to the car in front, I don't need my car to tell my wife."

But the growth and acceptance of ADAS systems is inevitable, he believes – but it's going to take some time. "Outsiders always underestimate how long it takes to get into automotive," he said. Automotive OEMs suffer from the "not invented here" syndrome, and that reluctance to deal with non-automotive partners will slow ADAS adoption.

That said, plans outlined by EU's crash-test body, the Euro NCAP, will spur ADAS adoption – but as those plans are implemented, the incentive for consumers to reach into their wallets for basic ADAS will, well, crash. Beginning in 2015, Riches said, Euro NCAP will begin to require driver-assist systems on cars before they'll award those cars the coveted five-star rating. The requirements will begin with some form of an autonomous braking system, then move on to pedestrian-detection, lane-departure warnings, and more.

That's all well and good for drivers and their passengers, Riches said, but when a feature becomes a government requirement, customers won't need to pay for it – it'll be up to the OEM to pay for what will become a standard feature.

"How are they going to get that money back?" asked Riches. "They're going to have to sell you something else." But those extra goodies over and above the Euro NCAP requirements could be added ADAS features. "Oh, you want traffic-sign recognition? That'll be an extra $300."

The sweet part of that strategy would be that adding such a feature might be a mere software upgrade or, at worst, a memory upgrade or a slightly more powerful processor – nothing that would cost the OEM anything close to $300.

Finally, if you've followed the rise of digital electronics in the automotive sphere, you've certainly heard of car-to-car communications, in which cars can share info amongst themselves such as location, speed, and even texting or voice. Riches sees that eventuality as a long way off.

Why? The ol' chicken-and-egg conundrum. "No one has shown me in a car-to-car communication system what me as a potential first-buyer-ever is going to get out of it."