Your tax dollars at work at Virginia Tech

Video A team of robotics researchers at Virginia Tech (VT) are using a university swimming pool to show off their latest creation, an autonomous robotic jellyfish developed for the US Navy that's capable of swimming a payload of technology into position off enemy shores.

Dubbed Cryo, the jumbo jellyfish weighs 170lb (77 kg) and stretches five foot seven inches across. It's controlled by a battery-powered DC motor, and clenches its eight silicone-covered linear actuator arms to mimic the propulsion mechanism of its biological inspiration.

"This robot we intend to leave in the ocean as long as we can; weeks, months, or even more if we can," said Alex Villanueva, graduate student at VT college of engineering. "We need something that's very efficient so we can make the energy that we have stored on board last as long as possible."

Jellyfish are some of the oldest multicellular organisms our planet has produced, and while they are uncomplicated creatures, their very simplicity allows them to survive in almost any environment and to use what little energy they can muster in the most efficient way possible. 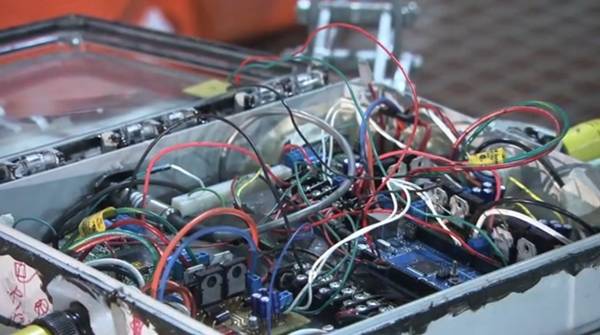 The goal of the project is to make the robo-jellyfish completely autonomous by extracting power from the hydrogen and oxygen in the water that surrounds it. VT scientists have had some success in building an engine that combines hydrogen and oxygen to control shape memory alloy arms, and although a prototype system is built into Cryo, it still requires recharging to keep its electronics functioning.

Cryo's large size means that it could carry a reasonable payload and still maneuver through the water efficiently – if a tad slowly. Possible uses for Cryo are military surveillance platforms or communications relay points that can stay on station, as well as civilian uses such as ocean monitoring and cleaning up oil spills. ®

Blancmange invader threat turns out to be, erm, trifling

We can rebuild him... we have the technology

You're drinking morning coffee in 2019. These eggheads are in 2119 landing drones on their arms like robo-falconers

With the help of what looks like vibrating dinner plates

Watch out for the GIGANTIC ALIEN JELLYFISH, warns space boffin

Jellyfish: nature's quickest on the draw

Even faster than Rolf Harris