Just what is Oracle going to plop out as its golden storage egg?

A plan must be hatched, or its hardware biz is fried

Analysis What's going on with Oracle storage? Besides tape, which seems to be doing fine, does the IT giant have a long-term, viable external storage array product line at all? 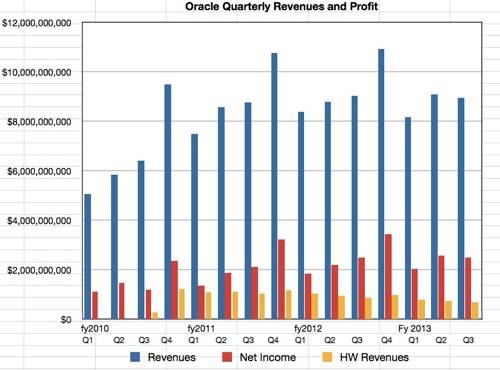 Charting the hardware revenues per quarter on their own clearly shows the multi-year decline since Oracle entered the hardware business by buying Sun: 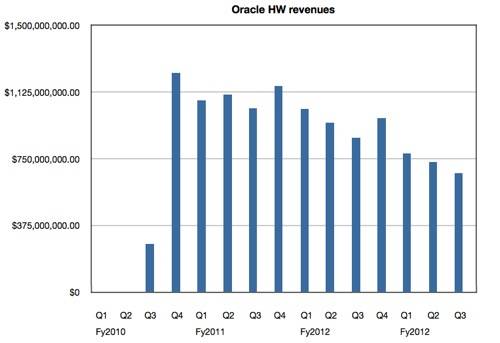 How do you build a small hardware business? Start with a large one.

Something needs to be done. Oracle has just majorly revamped its server hardware, but storage hasn't been a shining star and work is needed there, too. Let's set the tape drives to one side for now - that's looking healthy, witness Google use of Streamline - and instead look at the networked storage array products, the ZFS Storage Appliance and Axiom 600 array.

According to Gartner, the Sun ZFS Storage Appliances are Oracle's primary storage for Oracle VM and are the backup for Exadata systems. There is dilution of Oracle's ZFS brand by other suppliers using open-source ZFS software in their arrays, notably Nexenta and Greenbytes, which has rewritten and improved the ZFS deduplication code. Coraid has a ZFS-based NAS head for its EtherDrive arrays. Hybrid array startup Tegile has ZFS-based software too.

ZFS is a RAID-using file system that's facing competition from object storage technology. Suppliers such as Amplidata (OEM'd by Quantum), Dell (Caringo), HDS, NetApp with StorageGRID, and Scality are beating the object technology drum, and Joyent has a cloud object storage service. Oracle has no object storage capability

ZFS is fundamentally a disk-based technology using flash for read and write caching. NetApp, for example, is building its FlashRay product as its hot data storage box, and EMC has its XtremIO product. Oracle has not announced any shared flash array storage technology.

Traditional file systems are also not as active in the Big Data market as they might be because of Hadoop. There are connection technologies to link ZFS and Hadoop, such as one from Nexenta [PDF].

This is Oracle's SAN access array and is a disk-based system with support for solid-state drives (SSD) which Oracle acquired in mid-2011. The top-end product, the Axiom 600 array, dates from 2008, with an SSD-supporting hardware update and software update in 2010. There was another Axiom software update in September 2011: release 5.0 improved management, added replication and physically separated domains of data.

The net of this is that the 600 array is now three years old and, like the ZFS Storage Appliance, facing competition from faster all-flash arrays for primary data storage, while using a disk access-based operating system. It's getting to the point where a hardware refresh is needed along with a strategy refresh as well.

We note that Oracle has recently recruited two storage-experienced executives from cloud storage service startup Nirvanix; Steve Zivanic is a vice-president in its Storage Hardware Systems Business Group in February this year, and Scott Genereux, ex-Nirvanix CEO, is a senior veep of global hardware strategy, planning and product management. These appointments hint that Oracle is not exiting the external shared array business. Supporting this view is the fact that Pillar's senior execs are still beavering away in Oracle.

Vulture Central's storage desk thesis is that Oracle's Storage Hardware Systems Business Group is about to lay a product egg or two. What will these eggs contain? We would suggest a unification of the Pillar Axiom and ZFS Storage Appliance product lines would be a good idea, if it were possible to combine the two hardware architectures. This product should have scale-out attributes.

Secondly, Oracle should introduce a shared all-flash array to stop competitive incursions into its base. If ZFS and Pillar hardware unification is not possible then an all-flash array should be a front-end primary data store for both of them.

Thirdly, Oracle should cosy up to Hadoop more.

Fourthly, Oracle needs a storage array roadmap that responds to a gradual but growing migration of enterprise's stored data into the cloud, which will include some primary data, thus reducing the market for shared storage arrays. This is a strategic issue that will trouble all incumbent shared storage array product suppliers, with cloud storage and cloud computing threatening to eviscerate the hardware golden goose.

Us here in Vulture Central expect Oracle to follow on from its recent server announcements with major storage product announcements later this year, aimed at stopping the storage array revenue rot we're pretty sure it's experiencing relative to the storage industry in general. ®