I’ve tried a fair few wireless headphones over the past ten years, almost all of them unsatisfactory in one way or another. Many of the early ones were over-the-ear jobs with those round-the-back-of-your-head bands, but all suffered from either excessive weight - thanks to the on-board battery - or simply didn’t play for long. Even those with shorter battery lives tended to be bulky, and they all came with clunky adaptors for iPods, hi-fi and such.

Nowadays we all use smartphones of course, and these all now have Bluetooth on board. Wireless headphones have evolved too, miniaturisation and better power management allowing them to be little larger - if at all - than cabled cans. These here Jabra Revos may just be the pinnacle of that evolution. 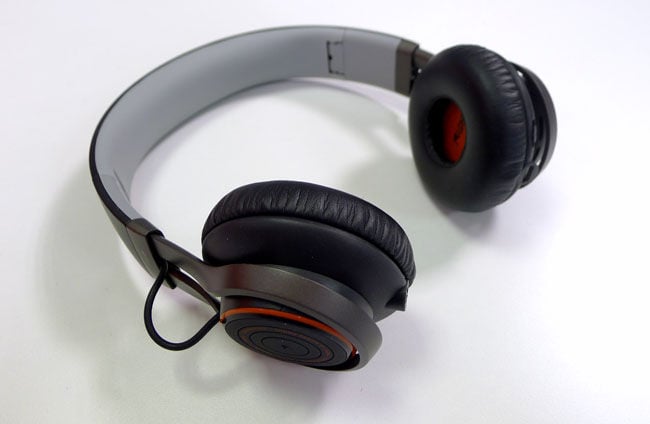 The ‘phones are something of a triumph of mechanical design. The ‘grey and black with orange highlights’ scheme is neat enough, but the build is better. The cups are pivot-mounted on a thick aluminium frame that runs up into the plastic headband. They’re extendible, with enough cup-to-cup cable that the internal cord isn’t strained. The cups are angled slightly front to back so you won’t mistake which way round they go, though Jabra’s designers have written ‘left’ and ‘right’ on the fabric covering the 40mm speakers.

A little way up into the headband on either side is a steel hinge to allow you to fold up the Revos for easier storage in the inevitable wee cloth bag bundled in the box. The hinges seem robust and certainly latch with a solid thunk that requires some force to reach - enough to satsify you the ‘phones will stay where they are, but not enough to make you think you’re going to break them. 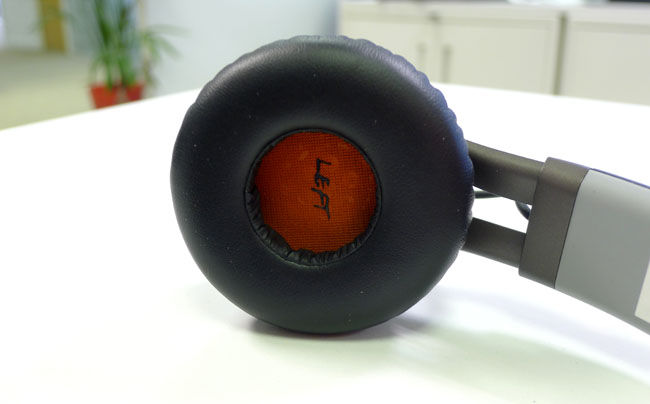 So you don't put them on the wrong way round

The vinyl pads are comfortable and do a good job of cutting out environmental noise - certainly loud Reg office chatter, London Underground trains and the living room telly, I found. The cups aren’t large, but they pump out a voluminous sound - adjusted using the handset or a touch-sensitive panel on the back of the right speaker. The Revos are comfortable to wear - their 240g is unlikely to tax you unless you have them on for very long periods.

The Revos connect over a standard Bluetooth link, tapping in to a mobile OS’ own media players by whatever means they use to route audio over Bluetooth rather than the speakers or the 3.5mm socket. The results are good, but they’re better if you use Jabra’s own iOS and Android app, Jabra Sound, which runs your phone’s audio through its optional Dolby-branded signal processing first. 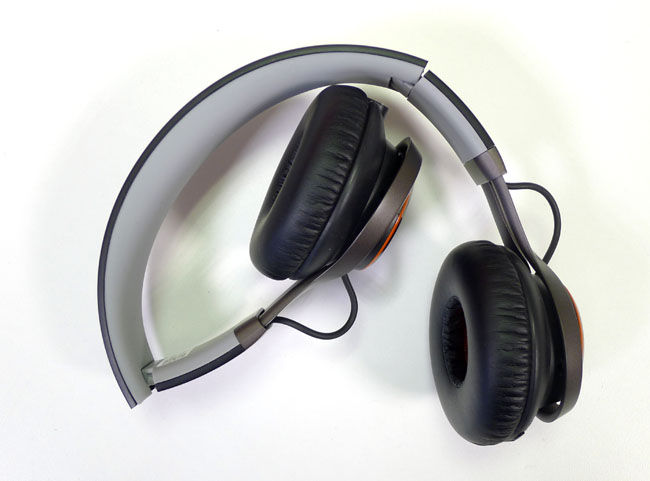 Tough on the eyes the app’s black and yellow colour scheme may be, but it works wonders with 320Kbps AAC and MP3 files, giving the Dolby Digital Plus treatment for improved equalisation and spacing the sound out with Mobile Surround technology. The free app taps into the phone’s native audio library, and to prevent you get all the benefits without forking out for Jabra’s hardware, there’s a code in the box you need to key into the app to link it to your pair of ‘phones.

I like the results. As is the trend these days, there’s a lot of emphasis on the bass, but the Dolby processing stops it seeming that the tubs are being thumped right next to your ear. It also lifts the mid-range and higher frequencies so they’re not muffled by the accentuated bass. That said, the effect is clearer with more modern music that has been mastered with portable music players in mind than it is with rips of CDs punched out in less recent times, so it’s clear the technology is emphasising modern mastering choices rather than remastering on the fly. 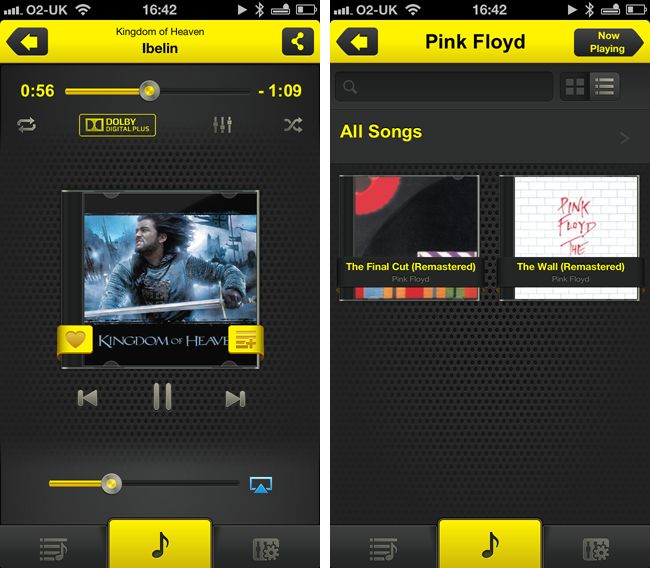 It’s not perfect, mind. I’ve mentioned the eye-gouging colour scheme, but one real annoyance is the app’s inability to start a second track as a first one ends. Playing multi-track but continuous sound albums becomes less satsifactory when there’s a second or two gap between tracks. Say what you like about Apple’s iPod and iPhone, they have nonetheless long been able to play tracks without gaps. Get used to correct, gapless playback and it’s a real shock when you hear it again. Much as I like what the Jabra Sound app does to the music it plays, I don’t like my music artificially separated this way.

You’re not limited to Bluetooth - Jabra also bundles a 3.5mm to 3.5mm cable complete with with inline controls and mic, and decked out in orange cloth. It’s accompanied by a similarly hued micro USB cable you can use to charge the Revos’ on-board battery. The 3.5mm cable clips into the left cup, the micro USB into the right, next to the spring-loaded slider control which combines on/off selector and flips forward to put the Revos into Bluetooth pairing mode. A synthesised voice tells you what to do next to get Revo talking to smartphone. Inserting the 3.5mm cable auto-cuts the Bluetooth link. The second cable lets you use the Revos as a USB headset with your computer. 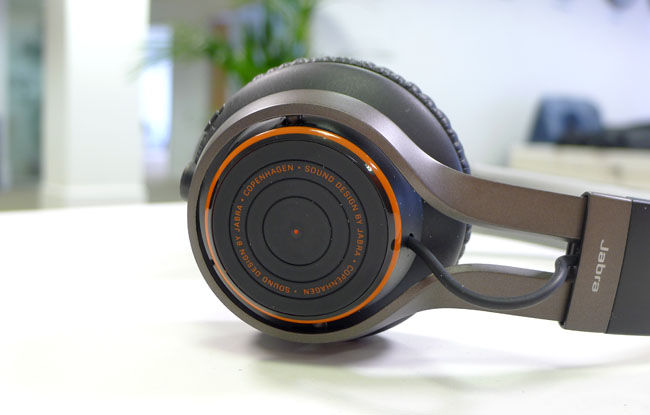 The battery, claims Jabra, is good for up to 12 hours’ music playback and talk time, and for ten days in standby mode. Incidentally, there’s a mic built into the right speaker cup, so you don’t need the cable pod to use the Revos as a headset.

I should just mention the fit. Since these are on-ear 'phones rather than ear-enclosing ones, they're susceptible to wind-whistling if it's blowy when you're out and about. You can, of course, up the volume to compensate, but it's something to bear in mind if this kind of noise annoys you. Ditto if you anticipate long-range wireless connectivity. I found line-of-sight links start to show the odd stutter after around nine metres. Your own mileage may be different, depending on the device you're streaming from and how noisy the 2.4GHz band is in your neck of the woods.

One other feature to mention: there are NFC pick-ups built into cans for near-instantaneous automatic phone-to-’phones pairing. Being so woefully unhip that I don’t have an NFC-enabled Samsung Galaxy I was unable to try this. But since ‘manual’ pairing is piss-easy, I’m not that bothered. NFC will appeal to gregarious Revo owners keen to hear what’s on their chums’ phones. 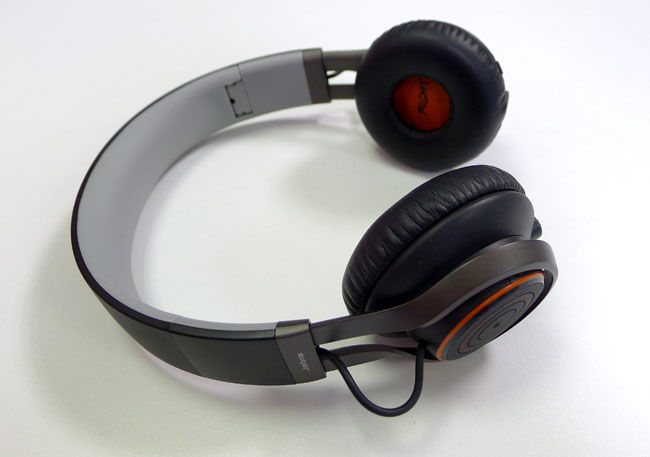 Jabra’s Revo Wireless headphones deliver on almost all points: the audio quality, the wear comfort, the external noise reduction, the mechanical engineering and the industrial design. And they’re tough enough to come with a two-year warranty, should be someone who doesn’t take too much care of their possessions. Yes, NFC is a gimmick but it’s going to be as ubiquitous as the Bluetooth technology used to stream to these ‘phones has become.

You won’t get the most out of these cans without Jabra’s app - which is in any case of little use if you’re streaming from a computer or a Bluetooth-enabled hi-fi, or you're watching a video on your mobile device - because you won’t get their Dolby Digital Plus enhancements. Not that the Revos don't sound good with native players, and you won’t get the Jabra app’s gaps-between-tracks playback either which some listeners may reckon is a plus. It’s a shame then to come away a whopping £200 lighter of wallet.

Yes, that’s the official retail price for these boys, give or take a penny or two. It’s a lot, but on a par with what you’d pay for a comparable pair of Sennheisers like the more bulky, less elegant MM500-X set. I can't say if the rivals are better - I can say the Revos are bloody good. ®