60-inch Apple iTV to be controlled by iRing remote?

You'll be able to buy it this year, fanbois, if analyst is correct

You may have had it up to here with reports that Apple is juuust about to release a full-on big-screen television – such rumors have been clogging the interturbes since at least 2009 – but the most recent one has a wrinkle that you, dear Reg reader, might find of interest: you'll wear its remote on your finger.

So wrote analyst Brian White of Topeka Capital Markets in a research note he sent to his clients on Wednesday.

If White's sources are remotely correct (sorry, we couldn't resist), the controller would be called – what else? – the iRing, and would enable more-precise control than simple "wave your hand at it" motion-sensing devices such as Microsoft's Kinect.

Perhaps the iRing would use technology as described in a remote-control patent application published in March 2009. Or perhaps not – these are rumors, people, decide what you want.

One other bit of new-rumor goodness that White's Asian sources provided is that the big-screen TV – said to be a 60-inch unit, and possibly also available in 50- and 55-inch versions – would be accompanied by what White called mini iTVs – portable 9.7-inch displays that could mirror the big boy's display from up to 200 meters away.

Yes, 9.7 inches is the size of the full-size iPad's display, but supposedly the wide-screen TV's smaller siblings won't have full iPad functionality. White sees Apple including one of the smaller screens with each wide-screen unit, and offering customers the option of purchasing up to four more. 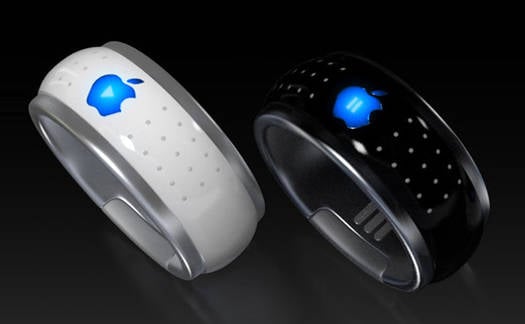 There's nothing new under the sun: this 'iRing' iPod was envisioned by designer Victor Soto in 2007

According to White, his Asian sources tell him that the iTV bundle will ship by the end of this year, and that the 60-inch version would run from $1,500 to $2,500, depending upon the accessories that ship with it.

As to why there have been so many conflicting iTV delivery dates during the ongoing rumor onslaught, ValueWalk quotes White's research note. "Clearly," they report him writing, "there has been plenty of misguided speculation around the timing of the Apple Inc.'s 'iTV' launch and we believe that this is largely due to changes by Apple Inc., most recently around the creation of entirely new user interface aesthetics."

That could very well be a reference to Apple's reported distancing its user-interface designs from skeuomorphism (real-world item imitation) to, well, non-skeuomorphic UIs. After the departure of former iOS headman Scott Forstall, über-designer Jony Ive was tasked with revamping Apple's UIs, and to create what White referred to as those time-consuming "entirely new user interface aesthetics."

But whether that revamp makes its debut on an iRing-controlled iTV during this year's holiday shopping season remains to be seen – some observers are more than mildly scornful – but one does wonder whether the legions of dedicated Apple haters will raise a certain finger in salute of the concept, one likely without an iRing ensconced upon it. ®