Tablets, cloud, THAT Thai flood mentioned as platters spin down

Disk drive sales in the EMEA region have showed falls in both units and capacity according to research from Futuresource Consulting.

Mats Larsson, a senior market analyst at the consultancy, said:

"The decline can be linked to the floods suffered by Thailand in 2011, which created shortages in shipments and further price increases. The second half of 2012 showed minimal signs of positive growth, with prices still higher than over a year ago." 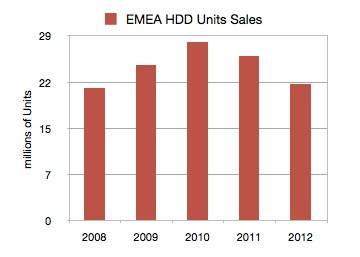 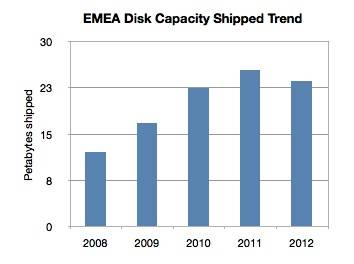 HDD capacity actually shipped shows a different trend as the capacity per disk has been rising. Total capacity shipped peaked in 2011 at 25.4PB, a year later than the highest number of units shipped, and declined to 23.6PB in 2012. 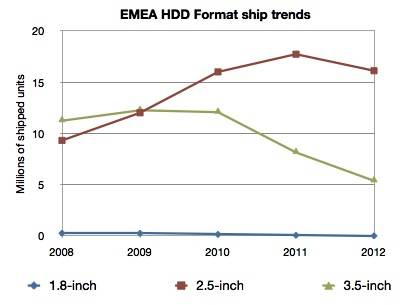 We might suppose this is due to a fall in PC sales and a rise in notebook computer sales. The introduction of 2.5-inch drives to storage arrays as a way of increasing IOPS/enclosure may also have played a part. From 2011 to 2012 both form factors showed a shipment decline, 2.5-inch unit sales having risen until then. 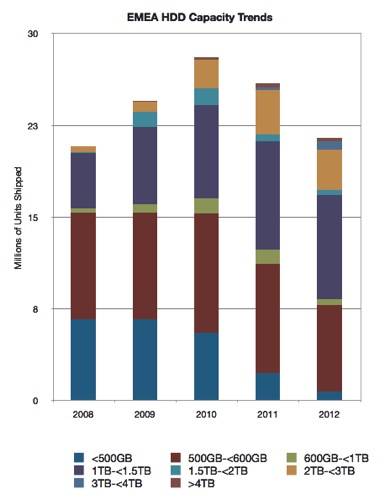 The 2TB to 3TB capacity band is a third, but smaller, sweet spot.

The consultancy also points out that Toshiba experienced a 200 per cent rise in market share in 2012, taking almost half of all disk drive sales in Germany.

Are we seeing signs of the disk drive industry spinning down in these charts?

El Reg suggests depressed markets in EMEA due to the recent recession. Well-known eurozone problems may well have had an effect.

It's possible that hybrid disk drives (such as ones with a flash cache) could increase disk drive sales overall - if such drives are taken up by tablet suppliers.

If they aren't, and tablets remain mostly a disk-free zone, then consumer-led declines in disk drive sales could be larger than any increase in unit sales to corporate storage arrays and servers.

Any increase in consumer and business use of cloud storage could exacerbate a decline in HDD units sales. Cloud storage will tend to use higher-capacity drives, and thus take a lower number of units, than would businesses or consumers buying the same amount of capacity. ®

Like nuclear fusion, funding of IT on the basis of revenue generation is just around the corner, Gartner says