The Royal Air Force is chuffed this week to announce the graduation of its first class of "remotely piloted air system pilots", who have the job of piloting aircraft they are not actually in. 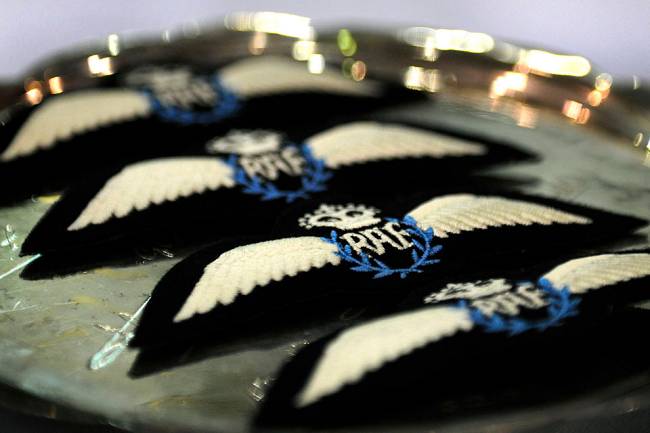 'Differ only slightly' from the normal ones. Visually, anyway

As regular readers of these pages will know, the RAF (with some involvement by the Army and Royal Navy) has been operating Remotely Piloted Air Systems - or drones, as we in the media tend to call them* - for quite some time. Blighty's "Reaper" roboplanes have been operational above Afghanistan for years. However until now it has been the usual practice for the RAF to assign pilots with previous experience in manned aircraft to RPAS operations.

This practice was abandoned long ago by the Americans with their much larger drone fleet, both on grounds of cost and the fact that drone duty is extremely unpopular among real-world flyboys and girls. The RAF, with the creation of its drone-only RPAS pilots, has now followed suit.

According to the Ministry of Defence;

Air Marshal Richard Garwood (who wears a normal non-blue pilot badge) had this to say as he awarded the first four sets of RPAS wings to newly trained drone pilots at Creech airforce base in Nevada**:

"Today’s graduating Reaper pilots should be justifiably proud of their achievements, having paved the way for the development of a new and exciting sub-specialisation within the Royal Air Force.

"To earn their wings they’ve had achieve the highest standards of airmanship and operational prowess, and I am delighted that they will soon join the RAF’s Reaper squadrons operating the aircraft in support of UK and NATO forces in Afghanistan."

RAF spokespersons declined to specify what career paths the four new drone-drivers had followed prior to qualification, but made some points regarding RPAS pilots in general.

Firstly, RPAS-only pilots won't receive the (substantial) extra pay that normal RAF pilots receive on top of that usually due to their rank. This used to be known as Flying Pay and is now known as Retention Pay, being viewed as a means of keeping the RAF's existing pilots from departing to join the airlines too soon. However we were told that in some cases an RPAS pilot may have previously been receiving such pay due to being in training to be an ordinary in-the-air pilot: suggesting that one source of future RPAS pilots is unsuccessful or surplus-to-requirement normal-pilot trainees.

We were also told that in some cases an RPAS pilot might have previously won the right to wear another RAF chest badge, suggesting that some future RPAS pilots might be former navigators or perhaps airborne pilots who have become medically unfit to fly. However it seems likely that most of them will join up hoping to become normal pilots and will be streamed into RPAS work following initial, "elementary" flying training. We were told:

On completion of officer training, RPAS pilots complete an Elementary Flying Training (EFT) course including the addition of an Instrument Rating qualification (40 hours+) plus additional training on the Tucano simulator, before undergoing pre-employment courses and specialist training on type (Reaper).

Elementary Flying Training is conducted on the Grob Tutor light aircraft. Historically the best EFT graduates are generally sent to fast jets, the best of the rest to large transport or tanker planes and the rest of the rest (of those found suitable to be pilots at all) into helicopters. It would seem there will now be a fourth stream.

The RAF also confirmed that all RPAS-pilots will be commissioned officers. Both the RAF and the US air force normally consider that piloting is officers' work, and in particular that the use of air weapons can only be controlled by an officer.

By contrast the British Army allows sergeants or even corporals (or junior members of the royal family) to fly the heavily-beweaponed Apache attack chopper. The US Army also allows non-commissioned warrant officers to fly its (many) aircraft, and has introduced a more heavily-automated "Warrior" version of the Predator drone which performs its own landings and takeoffs and is operated by enlisted soldiers without any real-world flight training. One such sergeant has previously told the Reg:

Previous training in crewed aircraft is irrelevant to UAS training ... I am insulted by much of the 'Oh, you fly an X-box' mentality which I constantly have to battle.

Naturally the ground forces, who routinely allow junior noncoms to command tanks and even private soldiers to employ shoulder-launched or vehicle mounted weapons of considerable power, find the airforce idea that use of force is an officer-level decision a little odd. However the RAF are having none of that:

Given the complexity of modern operations, criticality of decision making and the employment of lethal force from our RPAS, it is appropriate for those individuals who are newly recruited into the RPAS pilot specialisation that they should be commissioned officers and for them to undergo elementary flying training. In this way, RPAS pilots will gain the air awareness and understanding of the mechanics of flight, the air awareness at the heart of flying aircraft, which is fundamental to the integration of their capability, while also holding the seniority, accountability and credibility, as officers and pilots, required for safe and effective weapons delivery.

Even so it might seem that the "new and exciting sub-specialisation" of drone driving may not yet have an assured future - and that it will tend to be made up mostly of people who would much rather have been physically on board the aircraft they are controlling. ®

* This causes much mirth among military insiders. Your correspondent has often been supplied with the correct term, which we would surely use here on the Reg defence desk if it were not for the fact that as with most military buzzwords and acronyms it keeps being changed for a new one all the time. Rather than UAV, UAS, RPV, RPAS, UCAV etc etc it seems easier to just say drone.

** Both British and US Predators and Reapers are typically handled during a mission from Creech AFB over a satellite link. Landings and takeoffs are controlled from within the theatre of operations, to reduce latency.