A story with real bite emerges from chomp-cutlasses

They are the sort of weapons that could be worth hundreds to your average tooth fairy.

But a cache of weapons made from shark teeth is also valuable to scientists because they have revealed the localised extinction of two species of shark.

The swords, with a certain resemblance to ceremonial Klingon cleavers, were made by the residents of the Gilbert Islands in the Republic of Kiribati in the Pacific Ocean, using gnashers from the mouths of dusky sharks (Carcharhinus obscrus) and spotfin sharks (Carcharhinus sorrah). Yet neither species are to be found in the seas around the islands.

Spotfin sharks can now be found near Australia and Indonesia, while dusky sharks tend to hang around in the seas of Fiji.

"We're losing species before we even knew that they existed," wailed Joshua Drew, the ichthyologist at Columbia University who made the discovery. "That just resonates with me as fundamentally tragic."

Drew was "poking around" in the collection of Natural History in Chicago, when museum anthropologist Christopher Philipp showed asked if he'd like to see an armoury of shark-tooth weapons.

"Your natural response is: yeah! They're cool," gushed Drew.

He was able to analyse the shape and serration patterns of the teeth to identify which species they came from. 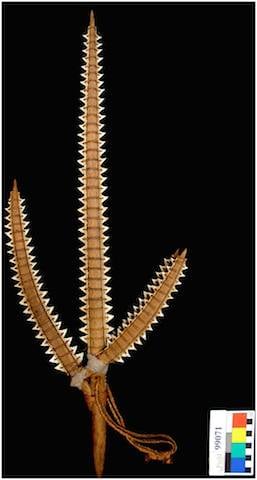 Researchers looked at 122 weapons and identified teeth from eight species of shark. They found that traditional weapon makers used pearly whites taken from silky sharks, oceanic whitetip sharks, tiger sharks, blue sharks and hammerheads - which can still be found in the waters around the islands.

But no scientist has ever seen a dusky or spotfin shark in the Gilbert Islands, prompting Drew to conclude they were "fished out" during an intensive period of shark-finning which started in 1900 and lasted for more than half a century. In 1950 alone, fishermen took 7,716 pounds of shark fins from the Gilbert Island's waters.

Locals have always been fascinated with sharks, which feature as heavily in Kiribati mythology as they do in their weaponry.

European visitors first arrived in the late 18th century and were amazed to find natives wielding daggers, swords and spears made of shark's teeth. The islanders would drill small holes in the teeth and then lash them to wooden handles using human hair or coconut fibres.

Local women got involved too, throwing clubs indiscriminately at the battling men - and often hitting the wrong target.

Drew hopes his findings, which have been published in the journal PLoS One, will encourage the islanders to take part in conservation.

He said: "It's not too late. There are still sharks in those waters. Shark populations take a while to regrow, but they can.

"I think it would be great to use this study as a way to help encourage the Gilbert Islanders to make strong marine conservation a priority, so that future generations can experience the same sorts of reefs that past generations have." ®