Analysis It isn’t unicorns that keep the internets running, but eye-watering amounts of capital investment by infrastructure operators. However a substantial chunk of that investment never pays for itself and most of it barely repays the cost of the capital, reckons consultancy PwC.

The telco industry as a whole spends $320bn on infrastructure globally, a six-fold increase in thirty years. PwC studied 79 mobile and fixed line operators who account for almost two thirds of this infrastructure investment and found that $65bn is wasted.

But wait, it gets worse. PwC calculated that overall the return on investment (RoI) on capex is just 6 per cent - which is lower than the cost of the capital itself of 9 per cent.

It’s only because the golden days of growth are over, notes the study, that Big Telco is finally having to confront the problem.

“About 70% of investments cover their cost of capital and about 30% generate very poor returns indeed. The difference is easy to explain. We calculate that most telecoms operators mis-allocate about 20-22% of their discretionary capex, but when you include the non-discretionary capex they’re required to make for regulatory reasons the percentage rises to about 30%.” 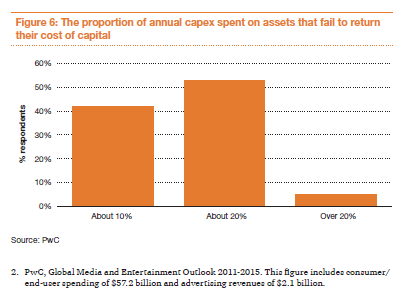 PwC also explores some reasons of the reasons behind the misspent capital – such as poor decision making, and the need to keep up with the latest technology. Two thirds of capex investment is driven by technology, such as 4G. That doesn’t sound so bad to me. What sounds worse is that it stops.

The report is almost a year old, but languishes in obscurity. So why blow off the dust now?

The reason should be obvious: we get the internet we pay for, and without serious capital expenditure, it will begin to resemble Dilbert’s Republic of Elbonia. Despite the growing clamour for the state to step in and save us all from evil telcos – nation states are bankrupt. The taxpayer won't pay for the latest and greatest internet infrastructure to the tune of $320bn.

Yet so many sideshows consume the tech press and demand popular attention – from "net neutrality", to the latest "internet is breaking" scare. This should help put things in perspective.

You can download the report from here. We’re obliged to the always-fab Martin Geddes for the pointer. ®