Thankfully Columbia itself – and the skill that has gone into weaving a backstory into the setting that you can unveil yourself by going that extra mile in your exploration of the city – largely makes up for the occasionally uninspiring gunplay. Rarely has such effort been invested into making a fictitious gaming world seem so convincing.

From the ticker tape parades that await DeWitt’s fledging steps on Columbian soil, through to wind-up George Washington automatons built to narrate American victories, the city is awash with marvels to distract and delight. There’s even a penny arcade complete with a puppet show game that it is narrated has been ‘delayed’ but was ‘worth the wait’ – you jesters Irrational. 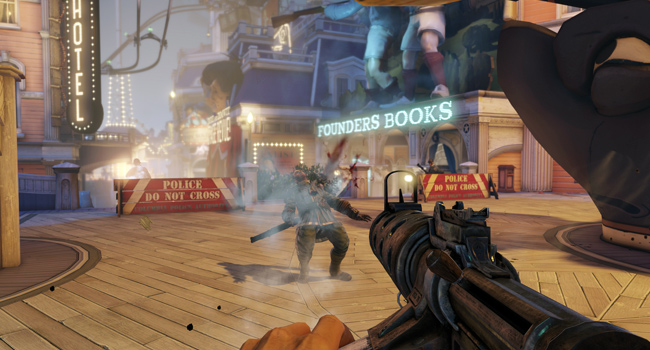 Infinite is also interesting from a visual standpoint, I've already described the sheer indulgences in the rendering of its world, but what I've not mentioned is the difference across systems. Thus far I've played the first hour of the game on PC but have completed the game on PS3 (no Xbox 360 access as yet, sadly), and visually the difference is like that between a pool of spring water and a tar pit.

Perhaps tar pit comparisons are a little excessive, but once you've seen Infinite on a high end PC and sat, tongue lolling, at those distant skylines, the beautiful reflections and those light blooms, the PS3 version seems somehow drab. The gameplay is the same of course, mouse and keyboard advantages aside, but the PC version captivated me in a way the PS3 version just didn't.

I'm not saying console owners shouldn't bother, far from it. However, if you do have a PC with the perquisite hardware then you’re in for a treat. Indeed if Irrational didn't spend the next few months polishing the game as a day one title for PS4 and Xbox 'nextbox' I'd be absolutely amazed. And you know what? If it did I can't imagine many other launch titles getting a spin on my shiny new console before I'm embroiled in another quest through Columbia.

Ken Levine’s work is a tour de force of environmental storytelling, but is let down by predictable FPS mechanics. Not that the shooting is awful, far from it, but just that this second component to the game pales in comparison to the splendour of Columbia. Buy it, play it, just be prepared to grind through combat sections at times.

Additional releases this month include the StarCraft 2: Heart of the Swarm expansion which fans of the RTS online sensation really won’t be able to do without, and the excellent Monster Hunter Ultimate. The latter a reboot of the Wii’s Monster Hunter Tri that features a rather neat save game transferring utility that lets you switch your progress from Wii U to 3DS and vice versa. ®