IWF warns of scheme to shock victims into 'police' payment

Security technicians at Sophos are poring over a new piece of ransomware that uses images of purported child sexual abuse to extort money from internet users, a discovery that has prompted an alert from the Internet Watch Foundation (IWF).

The malware activates when a user is online, and opens a browser-locking screen that claims to be from the German Federal Criminal Police (Bundeskriminalamt) that displays images of claimed child pornography (along with the name, age, and location of the victim) that the page says has been viewed on that PC.

"Ransomware that uses pornography as a tool is nothing new," Graham Cluley, senior technology consultant for the British security software vendor, told The Register. "This is the first time we've seen images shown – that's very different. It's going for shock value."

The lock screen also shows the user's IP address and internet service provider, as well as a live webcam view of the user if the hardware is available. The user is instructed to pay a fine to unlock their PC, and given an online account to put money into.

As ever with such attacks, actually paying the "fine" is the worst thing to do. Your PC will be marked down as having a valuable fool on the end of it, and further financial demands are sure to follow. 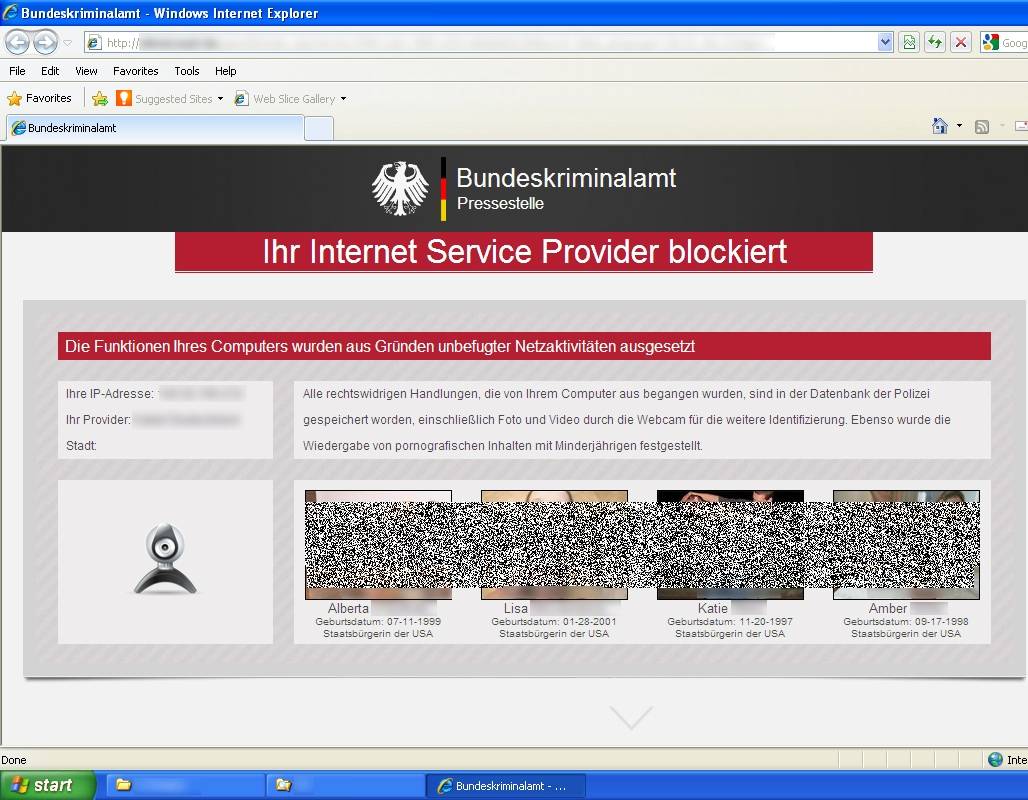 This malware also differs from most ransomware in that it doesn't activate when the infected PC is booted up, but only after a user goes online for a while, Cluley explained. The code is still being tested and other nasty surprises may be lurking in the payload.

German internet users started reporting the issue on Friday, but it is considered enough of a threat for the IWF to put the word out to German internet users immediaitely. But the malware is unlikely to stay solely a Teutonic threat, since it has been localized for other countries as well, Cluley said.

Testing showed that when the ransomware was run from a British IP address, the purported police message was rebranded as coming from the Bundeskriminalamt to the London Metropolitan Police. Cluley said that it was reasonable to assume that other police force's brands have been added, as is the case with other ransomware types.

Ransomware has been around for over 20 years, but there's recently been a big upsurge in its use. Along with fake security software it's one of the most directly lucrative ways of extorting money from internet users, and recent arrests have shown that it's becoming very big business indeed.

The Reveton Trojan, spotted last April, used similar threats of illegal pornographic viewing (without images), and when Spanish police swooped and arrested 11 members of the gang behind it, they found the team had been raking in €1m a year. ®