The recent news that North Korea had been caught red-handed indulging in some not-so-light hovercraft cloning, led our beloved Reg commenters to ponder just what software Pyongyang uses to big up its military capabilities.

One initial suggestion was that the communist state's Illustrious Father and Leader, Kim Jong-Un, had forked the Gimp, presumably with the assistance of an enormous dongle, and at great risk of provoking a catastrophic innuendo melt-down.

Although snaffling some open source software and bending it to your dark will appears the line of least resistance towards a mighty photo propaganda machine, we at The Register can sensationally reveal today that it is in fact Adobe which has been well and truly forked.

By means which we're not currently at liberty to divulge, we've managed to get our hands on a copy of "Most Glorious Kim Jong Il 사진Shop", named in honour of North Korea's former leader, but which we've dubbed "Norkoshop", for reasons which will become apparent.

Out of the Norkoshop box come one program CD, an additional CD of plug-ins and approved library images, plus a delightful bonus DVD featuring a CGI-rendered missile strike on South Korea backed by an instrumental version of Queen's We Are The Champions.

Installation couldn't be easier: just slip the CD into your PC, provide your Party Member's number, answer a few simple screening questions about North Korea's impressive agricultural output over the last decade, and you're away.

Here's a basic screen shot (click on this and subsequent images for a bigger version): 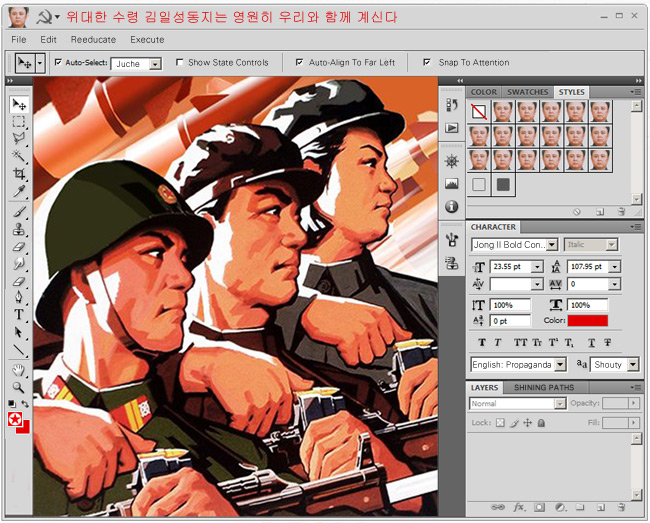 Well, it's quite evident whose code drives Norkoshop. The start-up interface does, though, show a few subtle tweaks, including the background automatic slideshow of square-chinned propaganda images.

This is paraded to the sound of a medley of rousing patriotic anthems, including farmers' fave O Great Jong-Un, Father of Bounteous Melon Harvest and When I'm Forking Windows, played by the Korean People's Army Ukulele and Clogdancing Cadre in the style of the great George Formby.

As you can imagine, the novelty quickly wears off, and it took us a while to work out that unchecking "Snap To Attention" kills the musical entertainment and the slideshow.

Taking a quick scoot around the menus, it's noticeable that the default styles selection is somewhat limited, as is the range of available fonts. You can choose between the suitably utilitarian sans serif "Jong Il", and its bold/condensed/italic flavours, the slightly more flamboyant "Divine Flourish of Eternal Struggle", and "State Bureau Number 6" - actually a crude faux typewriter script presumably used for creating old-school-style PDF death warrants.

On the surface, the tools menu looks identical to that of its decadent capitalist running dog lackey father, although it's inexplicably lacking a "History Brush" option, which by our reckoning would be pretty handy if you're trying to gloss over reports of last year's wheat harvest.

Nonetheless, there are a couple of advanced tools lurking in there. The first to catch our eye shows exactly how North Korea magically breeds hovercraft, and it's not just a matter of a quick copy-and-paste.

In fact, Norkoshop has a dedicated clone tool for military arsenal augmentation, whose drop-down menu allows you to select massed ranks of infantry, ICBMs, tanks or just about any other weapon of war for immediate insertion into images.

Here's the recent snap of the KPA (Korean People's Army) Large Combined Units 324 and 287 and KPA Navy Combined Unit 597 storming a beach somewhere on the country's east coast, ready for the cloning treatment: 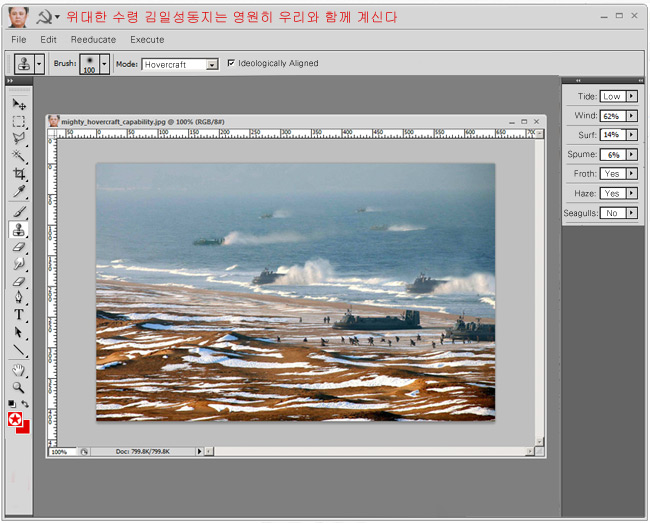 We stress that you don't need to copy anything from the original photograph. Having tweaked the output parameters in the right-hand menu, you merely click on the image and voilà: 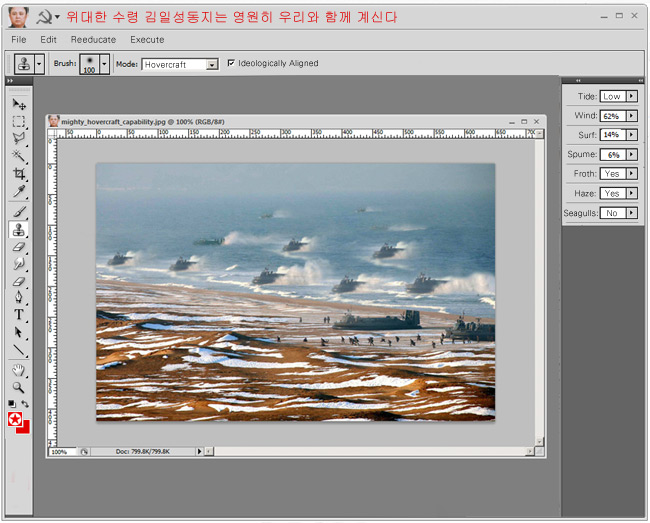 Truly remarkable, but there's more. While any self-respecting totalitarian regime needs the ability to add virtual weaponry, it's also important to be able to remove undesirable elements. In the good old days, countries like the Soviet Union would have teams of dedicated artists slaving over photographic prints, erasing comrades who'd incurred the state's wrath.

Many a poor general found himself disappeared from official snaps, before the lads in the long black leather coats called at the door bearing a one-way ticket to the Gulags. The amount of work involved in visually expunging miscreants was tremendous, but mercifully North Korean retouchers are spared such slog, because Norkoshop boasts a fully automatic "Erase From History" tool.

Try the following example of an officer condemned for an "excessively casual stance" in the presence of Kim Jong-Un... 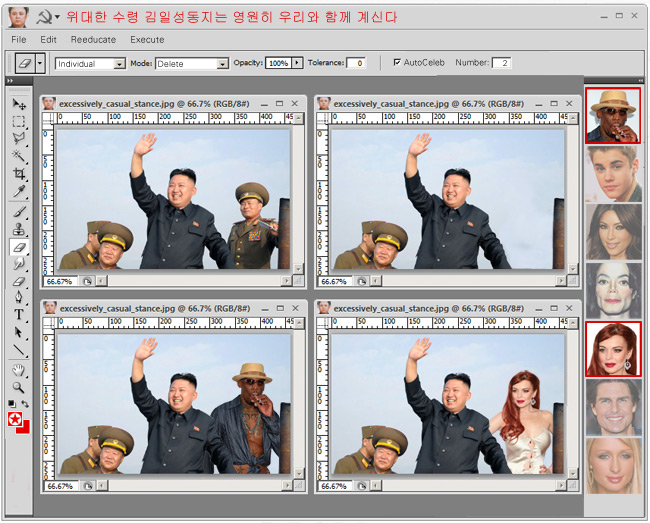 In a jiffy, he's history. As an added bonus, the "AutoCeleb" option substitutes him for a range of international luminaries, the better to illustrate Pyongyang's cordial relations with enlightened western stars.

Finally, we'd like to highlight the magnificent "State-Approved Haircut" brush, which will tame the most unruly barnet in accordance with government hairstyle edicts.

So, for parents fearful that their son's penchant for the mullet might be the first step on a not-so-shining path to a forced labour camp, help is at hand. 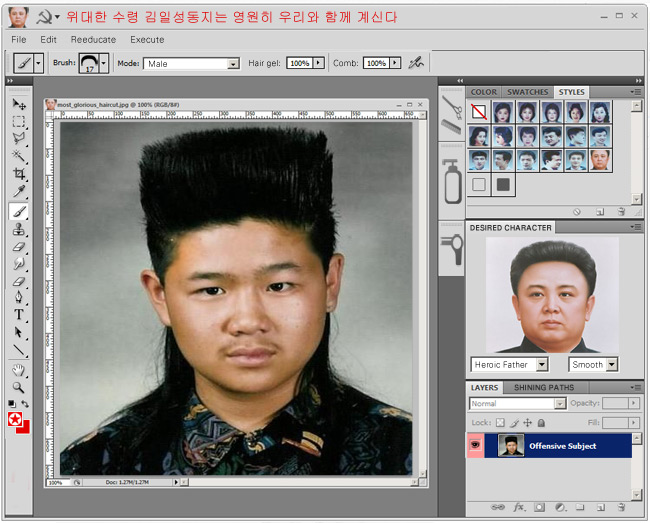 As with the armaments cloning tool, the State-Approved Haircut requires no more user input than opening the offending image and selecting a hairstyle, with the additional option of throwing a "Desired Character" into the mix. Once you're happy with your choices, Norkoshop magically does the rest: 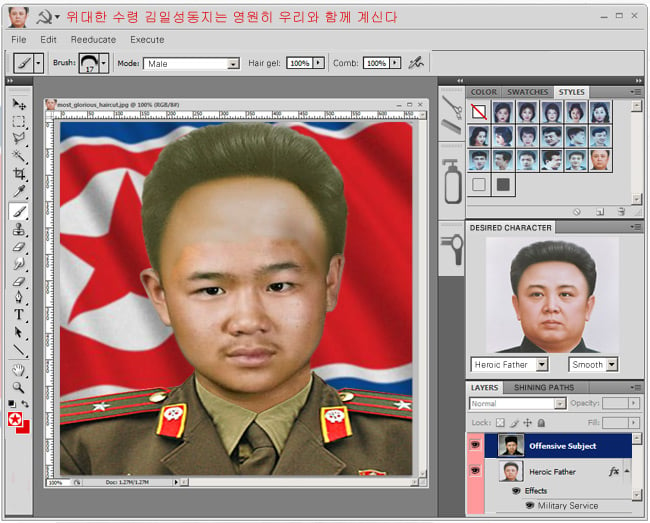 What really wowed us was the "Military Service" filter, which along with "Noble Peasant" and "Humble Servant" state bureaucrat choices, provides clothing suitable for a true son of North Korea and a really nice wavy flag background. Amazing.

Well, we're impressed, although quite what Adobe's lawyers will make of it remains to be seen. We'd imagine some legal sword-rattling is imminent, to which Pyongyang's response is likely to be a video showing ICBMs raining down on the company's California HQ, as the Peasant Collective Number 13 Kazoo Orchestra blasts out The Final Countdown.

And yes, the whole audiovisual experience will be created on "Kim Jong-Un Koremiere" vid-editing software. ®