Spooky action at a distance is faster than light

As Einstein put it, it's impossible for anything – even information – to move faster than the speed of light. Yet the lower bound of that impossibility, the minimum speed at which entanglement can't possibly be transmitting information between two particles, appears to be around four orders of magnitude higher than c, the speed of light in a vacuum.

When describing his objections to quantum physics, one of Einstein's thought experiments was to consider the creation of a pair of entangled particles, which would retain the property of entanglement no matter how great the distance that might later separate them: the state of each entangled particle would somehow affect the other, no matter how great the distance separating them.

As far as Einsten was concerned, that was a no-no, since keeping entanglement intact demanded information transfer take place at greater than the speed of light – a violation of the general relativity.

So: since we know that entanglement exists (it's been observed and is the basis of so-called "quantum teleportation"), it's perfectly reasonable to ask at what rate the information transfer is violating general relativity?

According to this paper at Arxiv, once Earth's inertial frame of reference is taken into account, the lower bound of the speed of “spooky action” is 1.38 x 104 the speed of light in a vacuum.

The researchers say that to guarantee that what they were measuring was truly the result of entanglement – and not, for example, the outcome of coincidence – they needed to set at least one record, and observe a continuous violation of Bell's inequality for 12 hours. 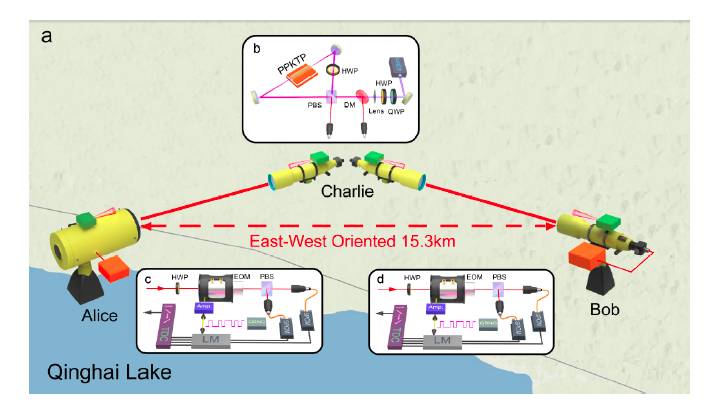 Experimental setup for measuring the speed of spooky action

Source: University of Science and Technology of China

The researchers, from the Department of Modern Physics at the University of Science and Technology, China in Shanghai, separated their “Bob and Alice” photon detectors by 16 Km in the Qinghai Lake province: one device was placed at a scenic lookout, the other at a fish farm. Between the two is the photon source and its associated equipment.

To keep the experiment operation for 12 hours, the researchers say they created a tracking system ensuring that the signals weren't lost, and conducted the experiment at night-time so they didn't have to cope with daylight. ®