HP includes an SRS Audio control panel, which you’d typically associate with virtual surround trickery. While that is included – the speakers are loud but a bit rasping, by the way – there’s also a selection of noise suppression features. Memos, Skype chats and the like can all benefit and no doubt the surprisingly accurate Speech Recognition feature on Windows 8 can tap into this too.

Well it seems really accurate when you start the training session, but if you get bored with that and try it for real, it soon becomes painful. No doubt more training would help, but try getting it to recognise the word "stubborn" and it stubbornly refuses. I ended up with "Stalin". And going for a letter-by-letter approach, it presumed I was saying X instead of S and couldn’t get a T at all. Do more training and no doubt your mileage will vary. Apparently, it is set-up for UK English speakers too, now there’s a mixed bag for sure. 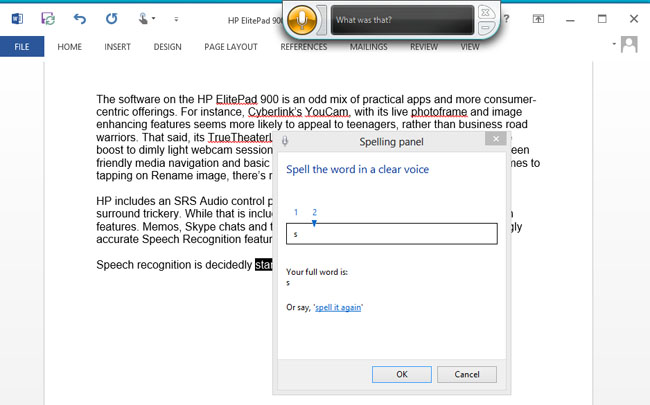 Trying a northern accent to say: The software on the HP ElitePad 900 is an odd mix of practical apps and more consumer-centric offerings. Transcribed thus: There is not we’re only be a tryt that how do we do not Nixon rattler signal in he was in the operating… And in my own less regional voice: The result where all the HP ElitePad nine up the is and what makes Bracknell or so and more consumer-centric are. Interesting that Bracknell comes up of all places, it's where HP's UK head office is based.

Still, Speech Recognition is a Windows 8 feature and not HP's doing although there may be a case for a better mic – SRS can't fix everything – and of course the speech training will improve matters if you think it's worth the candle. Oh, and I must say I’d also prefer to speak "Stop" rather than "Period" when ending a sentence, but never mind. 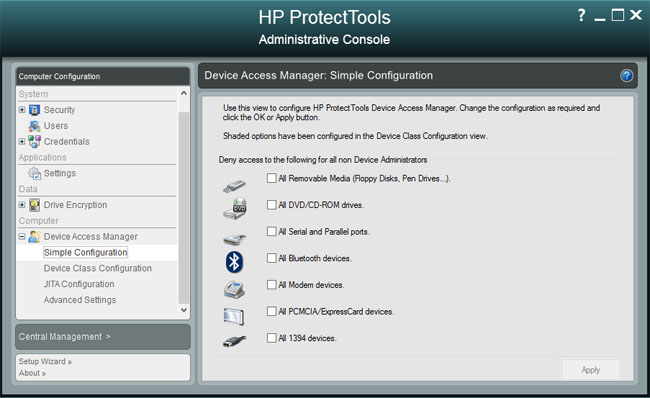 Among the useful apps is HP’s Hotspot, which allows a quick and easy set-up to become a base station. My initial thoughts were: it would be great if it worked, but attempts to share the Ethernet connection failed. A restart cured it though and the three devices tried that had lucked out previously – MacBook Pro, Lenovo ThinkPad Tablet 2 and Nokia Lumia 820 – all connected first time. Incidentally, HP's Wi-Fi Hotspot is fixed on WPA2 and Channel 11, all you can change is the SSID, password and shared networking source.

Where HP's PageLift app fits in with all this is hard to fathom. Using guides to move the corners around over an image, you can distort its perspective and that's it. Does it lift the image from the page? I tried it with a photo of an ornamental fish, I thought it might add some shark menace to it. The processing was clean enough, but you'd really need to get out more if you're wowed by this. More sensible is the inclusion of Absolute's Lo-Jack and its Find My PC and remote deletion features. As mentioned earlier, HP has its own selection of security tools that deliver a range of features from password recovery to major admin muscle. 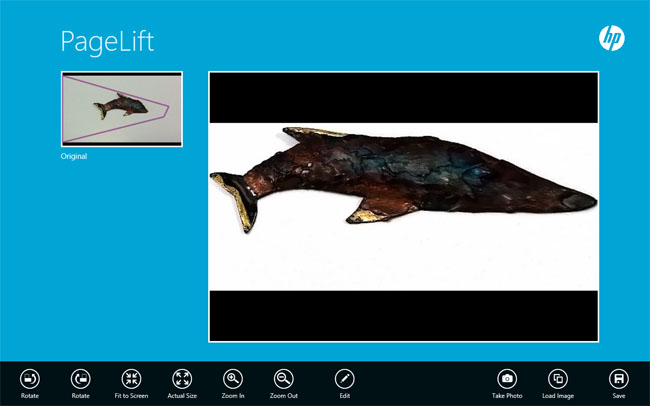 I must admit I rather missed having a stylus for navigating in Desktop Mode. Too often a tap to close a window ended up opening the Help menu from the icon below. HP's Executive Tablet Pen would no doubt help, but doesn't appear to be in the channel yet, it costs £34. Apparently, there's no hover support, so you won't see a cursor with pen poised over the tablet, but writing with it is supposed to be improved if you take HP's word on its Active Capacitive pen tech. You can read all about it here [PDF].

The benchmark performance figure of 1443 on PCMark 7 was almost identical to the 1438 achieved by the Lenovo ThinkPad Tablet 2, which is encouraging given they both rely on the same chip. I can't say I immediately noticed the difference between the Lenovo's 1366 x 768 screen and the 1280 x 800 resolution on the ElitePad either. Although as far as executive chic goes, the Lenovo has the edge, particularly given its on-board USB and mini-HDMI ports. Like Apple, HP makes you pay for those extras although you can opt for the cheaper dock cable adapters at around £25 each.

HP claims up to 10hrs 15mins for the battery life and that probably holds true if you don't have the screen on full blast or a movie habit. If you're tempted by the expansion jacket with battery, then you should be able to notch up 20hrs in total. Incidentally, the tablet takes priority, so the jacket battery drains first and the tablet battery charges first. One weird thing I noticed was, when charging up this combination overnight, the tablet never reached 100 per cent. It remained stuck at 99 per cent, so the charging handover to the Expansion Jacket didn't happen and it failed to charge up at all. I had to charge it separately in the end.

Overall, HP seems to have developed a sturdy offering both in terms of the ElitePad's physical form and its security software bundle, but appearances can be deceptive. The Sim and micro SD card slots proved troublesome and, as I type, I'm still waiting for a call from HP regarding the latter. Also, I get the impression that manufacturers realised all too late that for tablet users running Windows 8 Pro in Desktop Mode, it's much less painful with a stylus. So it's surprising HP doesn't include one in the box. Ideally, HP should have found a way to integrate a pen into the tablet shell, Lenovo-style, but that would have messed up the Expansion Jacket design. These decisions are all about compromises and sadly for the PC industry, Windows 8 makes that all the more obvious. ®