The US Navy says it has successfully test-fired a ship-mounted laser weapon, and that it plans to deploy the device to an actual maritime staging area beginning in 2014.

On Monday, the Navy released video and still images showing the somewhat-unimaginatively named Laser Weapon System (LaWS) firing on an unmanned drone, causing the aircraft to burst into flames and plummet from the sky.

Speaking at the Navy League Sea Air Space Exposition at National Harbor, Maryland on Monday, Rear Admiral Matthew Klunder, chief of Naval research, said the device would be deployed to the Persian Gulf, where Iran has been "harassing" US ships with drones and small, fast boats.

"The area we're going to test this in is a very intensive maritime region of the world," Klunder told USNI News. "Lots of commerce, lots of ships."

Klunder said the Navy has field-tested the solid-state laser 12 times so far, and in each case it managed to destroy its target. He added that the weapon also has a nonlethal mode that can generate a "dazzle" effect, which can be used to blind enemy vessels by overwhelming their sensors.

In addition to being effective against small, fast-moving craft, the cannon offers another benefit: its low cost relative to traditional weapons systems. According to The New York Times, firing LaWS costs less than $1 per sustained pulse. Compare that to the cost of a short-range interceptor missile, which the paper estimates run around $1.4m apiece. 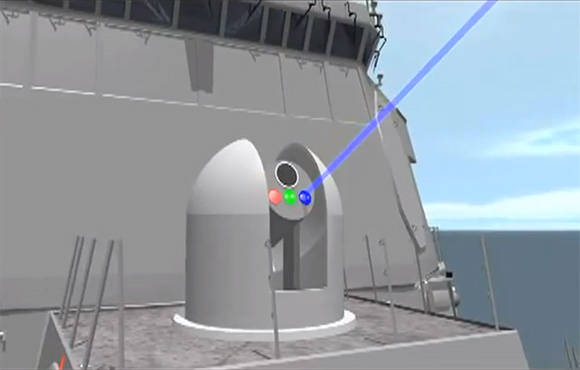 The current prototype LaWS cannon cost about $32m to build, but the Navy reckons that price tag will drop once it gives the go-ahead to deploy the devices across its fleet.

Klunder couldn't be more eager. "I want to get it out in the environment right now," he said, adding that LaWS is designed to integrate with the targeting and weapons systems already in place on US ships today.

But although LaWS offers unique advantages, laser weapons aren't without their drawbacks. For one thing, their effectiveness can be diminished by bad weather, smoke, and other atmospheric conditions. They also require a clear line of sight to their targets, which means they can't be used to strike targets over the horizon, unlike missiles. And various forms of armor and coatings can provide at least partial protection against laser attacks.

Nonetheless, a recent study commissioned by Congress found that high-energy laser weapons could be "a game changer" for the Navy, bringing about a technical shift "comparable to the advent of shipboard missiles in the 1950s."

On Monday, Navy officials said the next step for LaWS would be to deploy it on the USS Ponce, a former amphibious warship that has been reclassified as an "Afloat Forward Staging Base" – a kind of mobile sea fort that provides support for minesweeping and other Naval operations in the Persian Gulf. That will happen in 2014, officials said.

If LaWS proves successful in this next round of tests, it could become a standard part of the US Navy's arsenal, and even more powerful laser weapons could be in the works. One stated goal of the Navy's research program is to develop laser cannons powerful enough to knock down missiles or even planes, applications for which the current-generation LaWS lacks sufficient juice.

If a shark-mountable version of the device is in the works, however, the Navy is keeping its plans under wraps for now. ®