Western Digital subsidiary HGST has slapped 12Gbit/s SAS interfaces on three solid-state drives - which it claims is a storage industry first - and they fly, with one model boasting prolonged endurance as well.

The SSD800 and SSD1000 drives store up to 800GB and 1TB respectively, using enterprise grade 2-bit multi-level cell flash, built with 24nm process geometry. Their characteristics make them easy and straightforward to compare with other drives in terms of endurance, random I/O and sequential I/O performance. 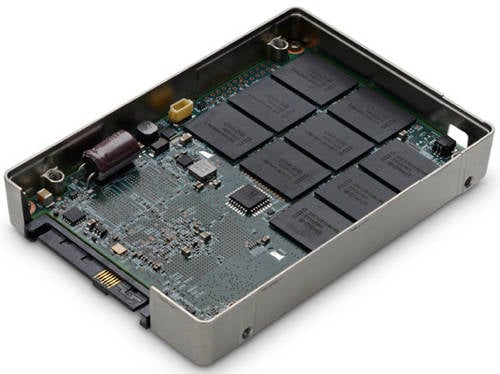 An SSD rated at 10 drive writes/day is regarded as enterprise class these days; 25 full writes a day pushes the bar considerably higher.

The 12Gbit/s SAS interface gets sequential I/O sprinting rather than streaming. The chart compares the three Ultrastars with SMART's C100E and STEC's S840. Respectable performers as they are, both of SMART's contenders are left in the dust. 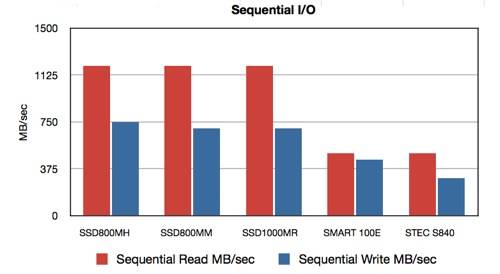 The SSD800M-s and SSD1000MR do 1,200MB/sec sequential reading, which is a record as far as our SSD supplier data is concerned. An OCZ Lightfoot does up to 750MB/sec but most drives do 500MB/sec or less. Exceptions to that include a Samsung SM1625 doing 848MB/sec and Toshiba PX02SM products doing up to 900MB/sec.

The new Ultrastars are also good at random IO, as a comparative chart of random read and write IOPS shows: 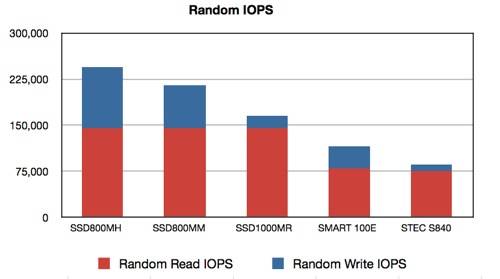 The drives are rated at having a 2 million hours mean time between failure spec. Hybrid flash/disk drive array startup Tegile is going to use these drives in a forthcoming Zebi product.

HGST's latest SSDs are sampling with potential OEM customers and channel distribution is scheduled for June this year. Self-encrypting models are also available. ®