New chippery all around, from tiny Atom to big bad Xeon E7

The Intel Developer Forum is kicking off in Beijing, China on Wednesday morning, and knowing that everyone can't make it to the Middle Kingdom to talk tech, Chipzilla gave El Reg a preview of what Diane Bryant, general manager of its Data Center and Connected Systems Group, would reveal during her keynote focusing on processors for systems, storage, and networking gear.

The story that Intel is telling is one we have heard time and time again: how the proliferation of network-connected devices of all kinds, from Coke machines to smartphones to tablets, is driving massive amounts of telemetry and application data across the internet and forcing companies to build more and bigger data centers.

Intel wants everyone to know that it has another rev of chip tech coming along to help deal with these ever-expanding data center workloads. And more importantly perhaps, that the cost of systems and storage has fallen so much in the past decade and big data–munching software has evolved so much over that time, that you can technically and economically think about doing something useful with data you would have otherwise had to ignore.

That's the sales pitch from 30,000 feet. But what everyone wants to know is what new chips are coming, what new features they will have, and when we can expect them.

The data that Intel is providing about those burning questions is a bit thin, but with IBM rolling out its Power7+ chips, Oracle launching its Sparc T5 and M5 chips, and Fujitsu getting its Sparc64-X chips out the door, Intel has to say something. And there is that ARM collective that is clamoring like barbarians at the gates, as well.

Intel's marketing machine knows that it has to stay in the conversation, but not say so much that it messes up sales for the next couple of quarters.

As it turns out, every part of the Intel server chip line is going to get a refresh this year. So says Lisa Graff, VP of marketing in the Datacenter and Connected Systems Group, who walked us through the presentation foils.

This chart shows the current Atom and Xeon processors on top, with their basic feeds and speeds, plus the code names of the updated chips we can expect from Intel in 2013: 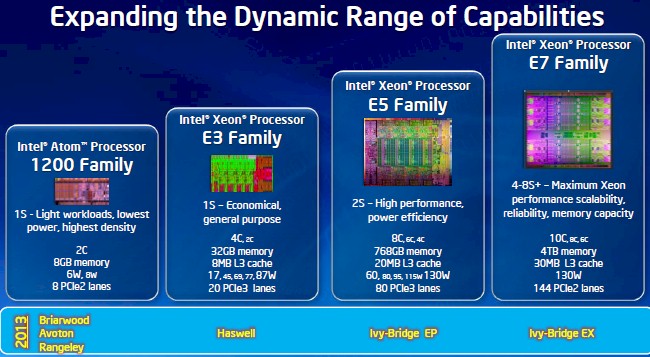 There will be not one, not two, but three different Atom S Series chips this year, plus a "Haswell" rev on the Xeon E3 processor. Both are aimed at microservers for the most part, with the Xeon E3 also being used in entry-level tower and rack boxes as well as workstations.

The workhorse Xeon E5 gets an "Ivy Bridge-EP" ramp this year, and after skipping over "Sandy Bridge-EX" in an effort to get everything back on the same schedule – more or less – Intel will jump from the "Westmere-EX" Xeon E7 processors from three years ago to a new draft horse "Ivy Bridge-EX" for four-socket and eight-socket boxes.

Intel will roll out three Atom chips in 2013, one for servers, one for storage, and one for network gear

Intel already talked a bit on Monday about the future "Avoton" Atom S Series server chip at HP's launch of its Project Moonshot hyperscale servers. Those machines are based on the current dual-core "Centerton" Atom S1260 processor, which runs at 2GHz and which has 128KB of L1 cache, 1MB Of L2 cache, an integrated PCI-Express 2.0 controller, and a DDR3 memory controller.

With Avoton, as El Reg revealed last year, Intel is moving the Atom S Series to its 22-nanometer TriGate process, a big shrink over the current 32nm processes used for the Centerton, and is adding an Ethernet controller to the chip. And as Intel confirmed on Monday it is also shifting to a new "Silvermont" microarchitecture.

Not much is known about Silvermont, but the expectation is that Intel will move to a point-to-point interconnect, like the QuickPath Interconnect (QPI) used in Xeon and Itanium server chips, and away from the old frontside bus architecture that is still used on Atoms and on all Intel server chips before 2009, when the "Nehalem" architecture came out with the Xeons.

According to information published at Tom's Hardware from information leaked from a source in China, there will be variants of the Silvermont Atoms with 1, 2, or 4 cores running at between 1.2GHz and 2.4GHz.

The Silvermont design will not only have double the cores of the Centerton Atoms, but will also have double the L2 cache; it will however be stuck at a maximum of 8GB of memory. This data relates to the tablet and smartphone variants of the Silvermont designs, but if you look closely, you can see the integrated Gigabit Ethernet interface that has been promised with the Avoton chips.

Hopefully for the Avoton server variant, Intel will be able to deactivate the integrated Generation 7 GPU on the die. And hopefully the graphics unit can be used as an adjunct processor like other GPUs can be, although Intel has not done this with other Atom or Xeon E3 processors to date.

"Avoton parts are out and running," says Graff, and will be available in the second half of 2013.

Next page: Back to the drawing board
Page: