FDR for the stars

NASA, and plenty of private individuals, want to put mankind on Mars. Now a team at the University of Washington, with funding from the space agency, is about to start building a fusion engine that could get humans there in just 30 days and make other forms of space travel obsolete. 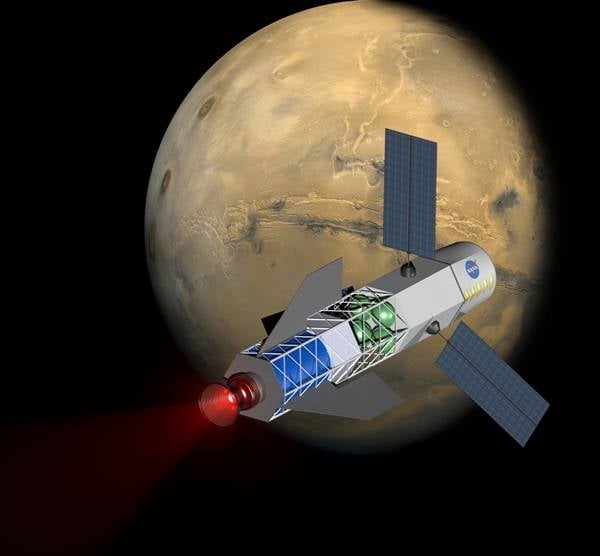 "Using existing rocket fuels, it's nearly impossible for humans to explore much beyond Earth," said lead researcher John Slough, a UW research associate professor of aeronautics and astronautics in a statement. "We are hoping to give us a much more powerful source of energy in space that could eventually lead to making interplanetary travel commonplace."

The proposed Fusion Driven Rocket (FDR) is a 150-ton system that uses magnetism to compress lithium or aluminum metal bands around a deuterium-tritium fuel pellet to initiate fusion. The resultant microsecond reaction forces the propellant mass out at 30 kilometers per second, and would be able to pulse every minute or so and not cause g-force damage to the spacecraft's occupants.

The spent fuel pellet is ejected behind the motor to provide propulsion, and because the whole process is magnetically controlled there's relatively little wear and tear on the engines. A pellet the size of a grain of sand would provide the same propellant as a gallon of conventional rocket fuel.

All this requires electrical power to control and contain the reaction, but Dr. Anthony Pancotti, an advanced propulsion engineer with the team, told The Register that the advantages of magnetic inertial confinement fusion (over that requiring massive lasers, for example) mean that the spacecraft could power itself on solar energy alone.

"It's very scalable; we can achieve fusion at a much smaller scale," he said. "We could run the designed engine off 200KW of solar panels, which is about the same power as generated by the panels around the International Space Station"

Using the FDR system, flight times to the Red Planet could take between 30 and 90 days, compared to over eight months that it took to send the Curiosity rover to Mars. The 30-day trip would require three days of engine operation to get the spacecraft up to speed and another three to slow it down into orbit around Mars.

Such a motor would also be considerably cheaper to launch than a chemical rocket system, since there is much less fuel to hoist out of the gravity well before it starts a trip. The proposed design for a 150-ton spacecraft would allow around a third of that mass to be used for cargo – human or otherwise – and the reduced flight time would reduce the exposure of astronauts to the effects of solar radiation.

Many space missions use aerobraking – using the friction of a planet's atmosphere to slow down – as a way of saving the propellant. This drive, however, is so efficient that aerobraking makes little sense, since the weight of the shielding needed for the maneuver is greater than the propellant FDR needs to slow down. 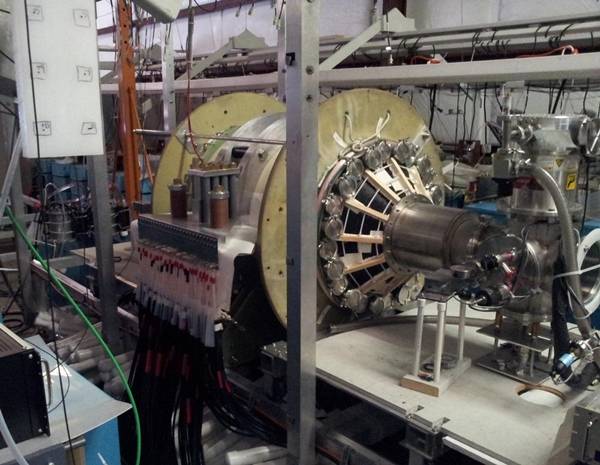 The FDR fusion drive prototype in a Washington lab

The team has tested all the parts of the FDR in the lab, and is now going to start building a fully working engine that brings these elements together, thanks to funding from NASA's Innovative Advanced Concepts Program, which aims to fund long-term space technology.

The FDR is one of only ten projects to get Stage Two funding from the program. This $600,000 award will provide the proof-of-concept FDR system over the next 18 months, and a working spacecraft would be ready as soon as 2020, Pancotti predicted – but if NASA wanted to throw money at the project, this timescale could be cut.

Given the tight financial strictures of the US government this is unlikely, but the FDR engine has the potential to make chemical or ion drives for spacecraft as obsolete as the steam engine for earth-bound transportation. ®