Upstart server-maker Cisco is bounding around the Microsoft Management Summit this week in Las Vegas to talk about how it is plugging its technologies into Redmond's cloud stack.

First up, as it promised it would do back in the summer of 2011, Cisco has ported its Nexus 1000V virtual switch to run atop Microsoft's Hyper-V server virtualization hypervisor.

While Microsoft has its own virtual switch, called Hyper-V Extensible Switch, there are others that run in conjunction with Windows, such as the vNetwork switch buried inside of VMware's ESXi hypervisor. The Open vSwitch created by Nicira is popular on Linux-based virtualization platforms and is now controlled by VMware. NEC in January launched its own freebie ProgrammableFlow 1000 Virtual Switch for Hyper-V.

Still, support for the Nexus 1000V is important for the Windows stack because Cisco is still, by far, the dominant supplier of physical switches in the data center. And a Nexus 1000V virtual switch, which is used to link virtual machines to each other, can manage their networks as the VMs migrate around a server cluster; it looks and smells like other physical switches that run the NX-OS operating system.

Satinder Sethi, vice-president of data center solutions at Cisco, tells El Reg that Cisco has watched the adoption rate for Hyper-V growing on its UCS B-Series blade and C-Series rack servers, and moreover, that Cisco expects many enterprises to have two hypervisors running across their clusters for various political and technical reasons.

The important thing for Cisco is that its Nexus 1000V virtual switch is the common element across whatever hypervisors enterprises choose. This is why Cisco already has the Nexus 1000V plugged into Red Hat's KVM hypervisor and is working on integrating it with Citrix Systems' Xen hypervisor – which has fallen into fourth place in the server virtualization beauty pageant unless you count all of the public clouds that use either XenServer (like Rackspace Hosting does) or a tweaked homegrown Xen (as Amazon Web Services does). 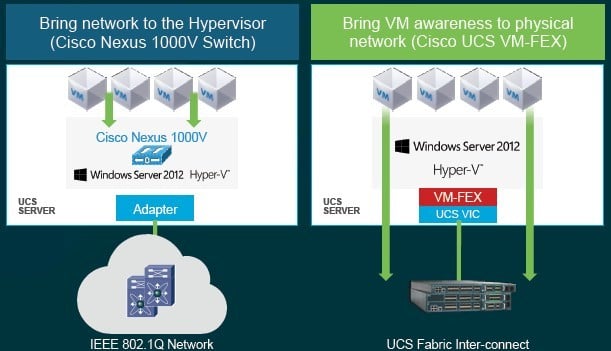 The Nexus 1000V support for Hyper-V 3.0, which is based on and which works with Windows Server 2012, was expected to be delivered in late 2012. So it took a few months longer to get it together than expected. (That's IT for you.)

By the way, you don't have to run the Nexus 1000V on Cisco's servers. It works on any x86 machine using a supported hypervisor, and many of the 6,000 customers who bought it through October last year run it on non-Cisco server gear.

The Nexus 1000V support for Hyper-V 3.0 will be available later this month.

From the get-go, VMware's ESXi hypervisor has been tightly integrated with the extended fabric at the heart of the UCS system, called the Virtual Machine Fabric Extender or VM-FEX. This takes the interfaces between the integrated UCS switch and the server nodes and virtualizes and extends them down into the server nodes with virtual network interfaces that can be set up programmatically and have its bandwidth or VM assignment changed on the fly.

Now this capability is also being extended to Hyper-V, which makes Microsoft's hypervisor a peer to ESXi at this point.

VM-FEX support for Hyper-V is available now, but Sethi says improved configuration tools are coming in the June-July timeframe to make it easier for VM-FEX and Hyper-V to work together. 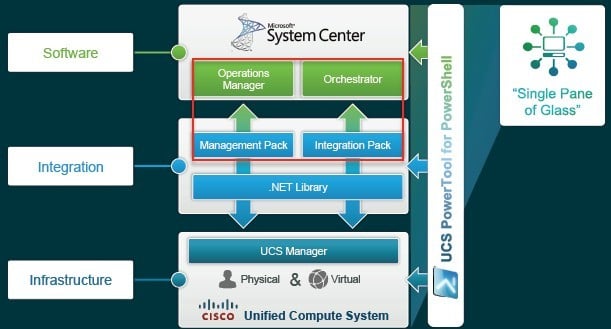 Microsoft and Cisco have integrated their respective control freaks

Cisco and Microsoft have also been working together to mash up their respective systems and systems-software management tools so they work together to make Windows and Hyper-V play nice on top of Cisco UCS systems. Specifically, the APIs in UCS Manager, the control freak that runs in the embedded switch in the UCS machines, and its UCS PowerTool, which are exposed to Microsoft's Systems Center 2012 SP1 and PowerShell utility.

Cisco has created a UCS Management Pack for Systems Center Operations Manager so customers can monitor UCS hardware and Windows software from the same System Center console. There is also a UI Extension add-in for Virtual Machine Manager that can talk through UCS Manager and the Nexus 1000V switch to the virtual machines on the UCS iron.

There is a Fast Track setup that mixes UCS systems with NetApp storage, known as FlexPod. This includes B-Series blade servers using the UCS 5108 chassis and the 6248 fabric interconnects plus Nexus 5548UP switches for the access layer linking multiple blade enclosures together. The storage systems feeding the blades are NetApp FAS3240 arrays. And of course the nodes are running the Hyper-V 3.0 hypervisor and the Windows Server 2012 operating system with all the control freakage above tossed in.

The VSPEX private cloud stacks that Cisco has built with EMC to run the Microsoft server stack can run either Windows Server 2008 R2 or Windows Server 2012 with the appropriate Systems Center management tools and Hyper-V hypervisor. This particular Fast Track setup is based on the UCS C220 M3 rack servers linked together by Nexus 5548UP switches and also talking to EMC VNXe 3300 arrays using iSCSI over 10 Gigabit Ethernet links. ®