Study: Most projects on GitHub not open source licensed

What's going on with the kids these days?

As for how to explain Williamson's findings, and why today's developers don't seem to be following open source licensing best practices, speculation ran rampant. It's a question that's hard to answer.

One theory proffered was that the acceptance of licensing best practices among open source developers is changing simply because the community itself is changing. It's already dramatically different from how it was in its early days, when the open source community and the Linux community were practically synonymous.

"People looked up to Linus and the Free Software Foundation and were following their example in how they were licensing their software," Williamson said. "But now the open source community is a lot broader than the Linux community, and the relevant platform for a lot of new development and that younger developers are familiar with is the web, rather than Gnu/Linux." 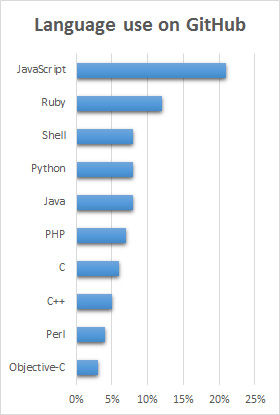 What? You thought C would win? (Source: A. Williamson)

Indeed, Williamson's data bears that out. Of the 1.7 million GitHub projects he analyzed, the largest portion – 21 per cent – were written in JavaScript. Coming in second with 12 per cent was Ruby, a language most often associated with the Rails web framework.

JavaScript developers, in particular, are prone to ignore software licensing concerns, because large-scale infrastructure projects written in JavaScript are something relatively new. Historical JavaScript practice hardly resembled the rigorous development process of something like the Linux kernel.

"For a long time, JavaScript was sort of the necessary evil of the web," Williamson observed. "There were pieces here and there to make things happen on web pages, but there weren't a lot of cohesive projects. There was a lot of code being shared on websites and blogs. And so I think the historical patterns of JavaScript re-use didn't necessarily correspond to the way that other free software projects are distributed and use licensing."

And what can be done about it?

But not everyone in the audience agreed that the shift to web languages was to blame for poor licensing practice, or even there was a clear trend. In fact, Richard Fontana, open source licensing and patent counsel for Red Hat, questioned whether developers releasing code without a clear license was even a new phenomenon.

"I remember before GitHub existed; it wasn't so long ago," Fontana said. "There were a lot of repositories on SourceForge that had no licensing information. If you go back even further, to the earliest days of free software, it was very common to share source code on Usenet without any licensing information."

One thing most audience members seemed to agree on, however, was that in today's legal climate, releasing code that is poorly licensed is often no better than not releasing code at all. As one developer observed, "I see so many companies where, when an unlicensed thing comes in, it gets deleted. And I just think that's a waste of effort from the open source community."

Just what to do about it, however, remains an open question. Several audience members suggested pressuring GitHub to prompt developers to specify a license whenever they start new projects, but GitHub's position is to default to an "all rights reserved" license, because it doesn't want its users giving away rights they don't understand.

The best solution the group came up with, in the end, was for people who like a certain project but are uncertain about its licensing to simply ask the developer to specify a license. They could file a bug report on the project's GitHub site, for example.

"People leave stuff out," Williamson explained. "They're busy writing code, and they just don't think about it. It's annoying – it's a slight irritant to put a license file with headers in your code, and people don't do it. But when asked, they often do." ®