Cloudmeter pulls big data from the network, not the servers

Last year, Atomic Labs, the creator of the Pion web analytics tool, changed its name to Cloudmeter, raised some money, and set above to make its analytics tool more broadly useful for enterprises. Pion has been transformed into a broader tool called Stream, which runs on premises, and Cloudmeter has cooked up an adjunct application performance management tool called Insight, which runs on the Amazon Web Services cloud.

Cloudmeter (or more precisely Atomic Labs) was founded by Mike Dickey in 2007 after he sold a company called BeatBox, which did Internet user tracking, to Mercury Interactive to $14m in the fall of 2005. Mercury was eaten by Hewlett-Packard, and the BeatBox code lives on inside of HP's Real User Monitor software.

The Pion Enterprise tool was sold to a bunch of different companies, including SAP, Netflix, and Saks Fifth Avenue, to name three, but last year, after raising $5m in Series A funding from Meakem Becker Venture Capital to create a next-generation "monitoring as a service" platform.

"There is a great wealth of information in network traffic, and not just business information or click stream information, that could be useful," Dickey explains to El Reg. "I realized there was a big data gold mine in the network, but that data was really hard to get at."

Complicating the issue of just doing big data on the systems a company has on premises is the fact that more and more applications are running out on the cloud, and more and more end users are accessing both internal and cloudy apps from mobile devices.

The Stream tool doesn't chew on big data, it just siphons bits out of the tangle of network traffic and spits them out to various analytic tools. The Pion tool similarly took clickstreams and pumped them out to Google Analytics, Unica, WebTrends, Omniture, and other tools that could chew through and organize that data.

What's the big deal about that? Well, Pion didn't require you to tag the web pages to do the tracking, but rather had a rules-based engine called Reactor that could look for patterns in the network data for web pages and then create what was, in essence, a weblog on the fly.

Stream works similarly and uses the Reactor rules engine, but is not restricted to web page data, but can dice and slice network data coming from internal ERP and CRM systems and apps on the cloud as well as the web pages. 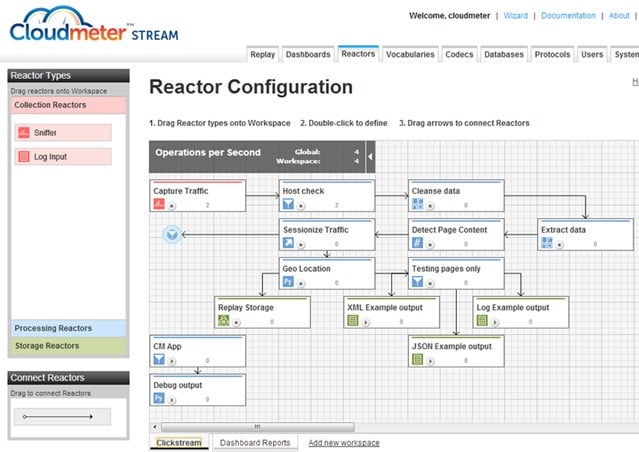 Anything that talks over a TCP/IP network can be watched and then diced and sliced by the Reactor rules engine. Exactly how Stream taps into the network and culls data from the firehose is a bit of a secret, and Dickey knows he is being cagey about it.

The point is that you can park Stream on your network and spy on applications (your own or those created by someone else) that your end users are hammering on. You don't need web logs and app logs and you don't have to tag pages or add JavaScript calls for tracking application or web pages.

But you can, for instance, poke around in your network data and ask Stream to siphon off all data about users poking at Facebook, or any sales data on the network traffic that is related to your internal transaction processing systems. So you can, in real time, set up a stream that will tell you at any given time how much sales you have done in a day, and do so without launching an SQL query on the production systems.

In its latest incarnation, the Stream 5.0 tool is sold as a bare-metal program that runs on Windows or Linux servers and it can also be installed as a virtual machine application (based on an Ubuntu Linux LiveCD image) on top of Linux. You can also run it in virtual mode atop VMware ESXi, Red Hat KVM, Citrix Systems Xen, and Microsoft Hyper-V hypervisors with either a Linux or Windows guest.

With Stream 5.0, Cloudmeter is also adding integrations into the Splunk analytics service and the GoodData reporting tool. It also has a Hadoop connector if you want to siphon off network data and dump it into the Hadoop Distributed File System for munching.

Stream has a base price of $10,000 to $15,000 for an annual subscription, with the price scaling up from there based on the number of page views that Reactor has to chew through in the applications that you point it to.

The size of the server to run Stream will, of course, depend on the amount of data you are siphoning and the number of rules you set up for piping data from those siphons to other analytics tools. 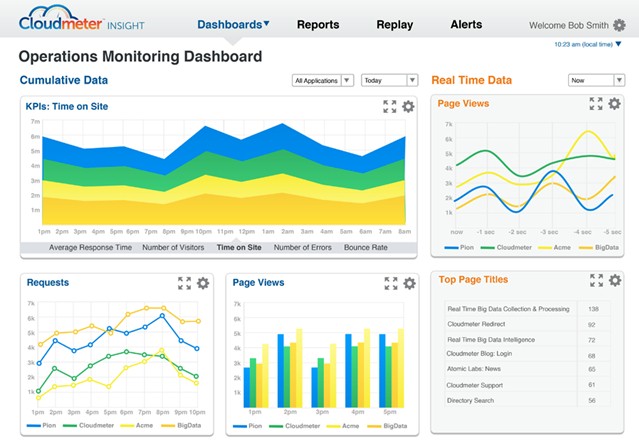 If Pion 4.0 has been gussied up and virtualized as Stream 5.0, Insight is a completely new tool from Cloudmeter, and one that is meant to be used in conjunction with Stream.

The Cloudmeter Insight tool is based on the same Reactor rules engine, but in this case, it is restricted to monitor application performance. It also has a replay function so you can wind it back and see how a particular application was performing and identify precisely where it started to go wrong and sort out why. Insight has a graphical interface and dynamic charting capabilities, as you would expected in a dashboard-driven application.

Insight is in early access preview now, and will be in beta testing within two or three months. A few months after that, says Dickey, it will be generally available. Pricing for Insight will be set then. ®