You got your Tintri hat, beermat and cat: But what does it all mean?

Hype begone: Is this storage management for dummies or what?

Hands-on Virtual storage upstart Tintri is a great example of a company I would never normally care about: when it comes to storage area networks (SANs) these folks are building the data vault equivalent of Falcon 9 rockets while I'm scraping together spare change for a Vespa.

If you have an astounding offering that is aimed at a different market than the SME world I inhabit I'll give it a sniff and see what's what; but my care threshold goes up with the sticker price.

Still, Tintri convinced me to come for a visit the last time I was in the Valley; I'm glad I did.

Tintri has been covered here on The Register before. Matt Asay thinks Tintri is too disruptive and will turn into a small snack for some storage vendor. Chris Mellor has been following Tintri for some time. The most recent piece had a title comparing Tintri to Marmite, which prompted a Google lesson about British cuisine that I wish I could unlearn.

All I ever took away from a year's worth of skimming articles on Tintri was "something something flash storage something virtual desktop infrastructure (VDI)". They make a flash array? How precious. VDI what now? Have you seen Microsoft's licensing on that? Care meter minimums not met; wake me in the morning.

So, why did the firm eventually pique my interest? First: the Tintri folks have put a considerable amount of time into demystifying storage (more on that later).

Second, in a typical storage array involving flash, you store your data on a bunch of spinning rust (hopefully with some fault tolerance) and you either copy or move the most frequently accessed (hot) blocks to a flash cache. Tintri's take on flash storage is just that little bit different. They make flash the primary storage and move cold blocks off to the spinning rust.

This might seem to be a minor quibble; the hot blocks end up on the flash and the cold on the spinning rust in either scenario. The difference is that in Tintri's world new data is "fast by default." This means cloning or snapshotting a virtual machine (VM) takes 3 or 4 seconds, not minutes.

It also has a knock-on effect: "cold" data that gets dropped off the flash tends to be blobs of sequential data that aren't being used anymore. We aren't talking about the odd block here or there, we're usually talking about that ISO you downloaded and then used once, or a backup you took ages past. This is the sort of thing that spinning rust is actually good at reading back.

More brilliant than just some flash

The real selling feature here is the software. The UI on this Tintri widget is "enterprise storage for dummies"-class awesome. Not only does the UI give you a clear understanding of what's going on with your storage, it actually helps demystify some of the more gnarled issues surrounding bottlenecks in a virtualised environment.

Tintri's storage jacks in to VMware's software and pulls out all sorts of stats about the VMs that are running on storage devices. The short version of this is that it puts everything into some really easy to grok graphs and gives you the ability to find out what subsystem to blame when things start getting slow.

Is it storage, networking, or CPU slowing things down? Have a complaint from a user about a slowdown 12 hours ago? Pop into the UI, select the VM and check the history; the culprit will be plainly visible.

The software also lets you know which VMs have changed their storage profile (access or size) recently. Any significant changes pop up on graphs and are shown prominently on the dashboard. You can see IOPS, throughput, latency, flash hit% and more from the level of individual VMs.

You don't have to take my word for it

For all that I got to work with the device, It was on Tintri's terms and not in my lab. I wanted to talk to someone who had run one of these widgets in the field for awhile; Tintri put me in touch with Ryan Makamson from the School of Electrical Engineering and Computer Science at Washington State University.

Makamson ran into Tintri at VMworld. A sceptical sort, he wasn't sold on the spot and mostly tried to be nice during the follow-up call. This netted him a sample unit to play with for a short time and the hands-on playtime is what sold him.

Makamson had a very specific pain point to overcome; a looming VDI deployment of 200-250 VMs ranging from XP to Windows 7. Makamson describes his environment: "75% are in a classroom/laboratory environment (linked clones/floating). 1 in particular is a civil engineering/CAD class; the other 25% of the VDI VMs are staff/admin dedicated linked clones."

When describing what made him make the jump, Makamson says it was the money, stupid: "Our storage was inadequate; we were a NetApp shop at the time, so they were the first choice. The purchase was totally driven by IOPS; NetApp could deliver the same level of IOPS but the cost point was much greater. Tintri was also a much smaller physical footprint, lower power consumption, etc."

Makamson says Tintri changed more than just adding a little speed: "We were holding back on creation/deleting until between semesters, and then refreshing the entire lab. Now we can do it after every use. We can know that every time a student comes down they are getting a VM as we intended without it having been abused by its previous users."

Makamson goes on to say that the presence of this one Tintri device is even having a knock-on effect on matters beyond IT. "We can now extend and make available the resource of VDI to more students. This has allowed us to take advantage of BYOD [Bring Your Own Device]. Labs themselves have changed to accommodate this; rather than being purpose built they are increasingly just a room where we can teach whatever, thanks to BYOD." 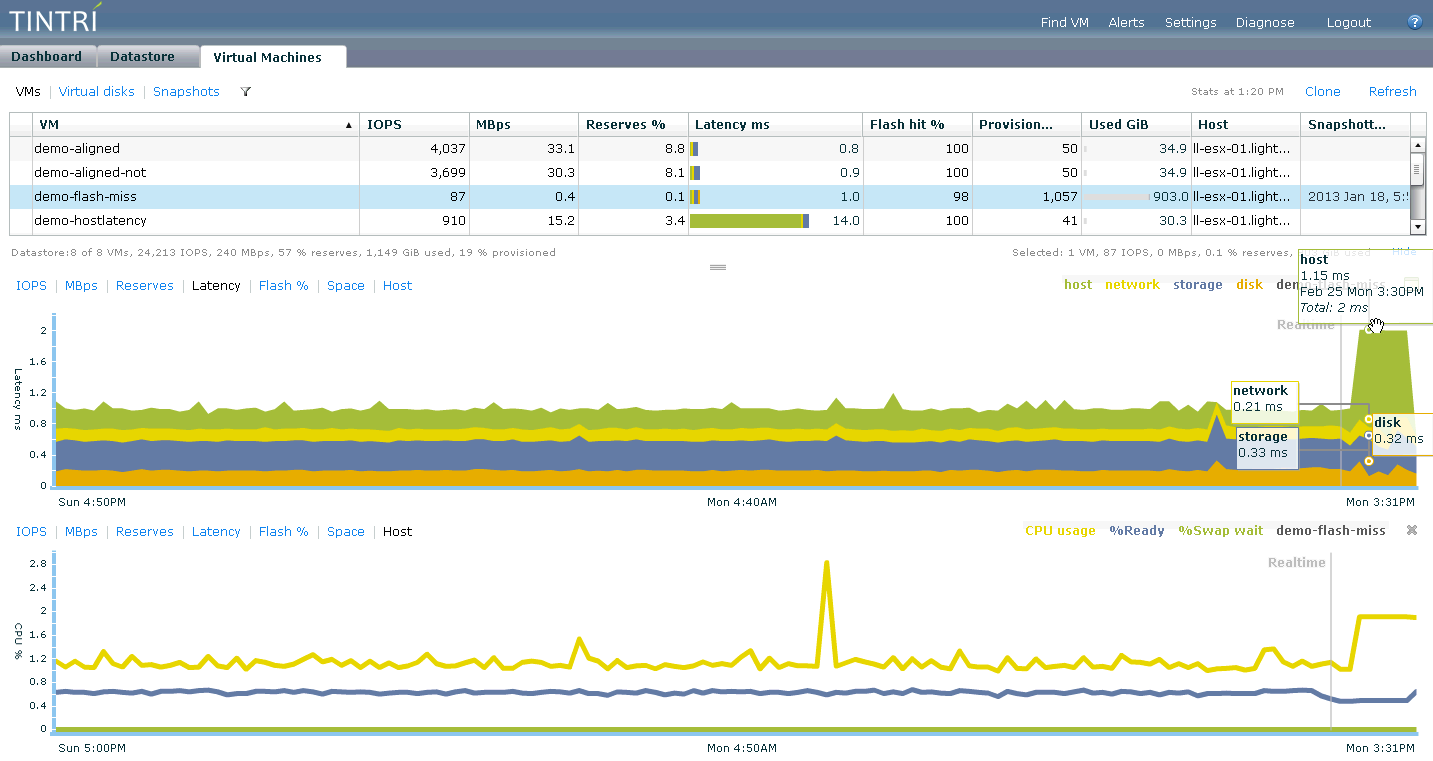 Tintri's interface: clean and to the point.

I differ with Makamson regarding the UI; for me it is Tintri's strongest selling point. According to Makamson, Tintri's software is a "pleasant environment to get all that information aggregated into one place. It helps you iron out the bottlenecks in your infrastructure; but once you have it set up, you don't have to go poke it anymore. When you first get it you spend a lot of time looking at the UI, the load, etc. Now I'm just confident I can throw stuff at it and there won't be a problem."

Makamson notes that the Tintri storage unit also makes a big difference in non-VDI workloads: "As far as performance goes, it's incredible. It just works."

Quite. There might just be something to these Tintri folks beyond buzzword bingo after all. ®