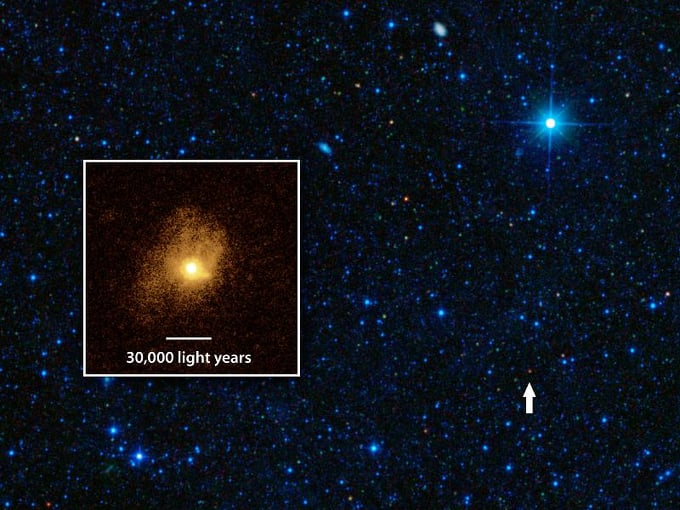 The "green" galaxy, spotted by NASA's Wide-field Infrared Survey Explorer (WISE) and Hubble as well as the IRAM Plateau de Bure interferometer in the French Alps, jumped out at researchers, despite sitting nearly six billion light-years away.

Infrared light more than a thousand billion times the energy of the Sun is pouring out of the galaxy, making it stand out from the rest of the sky. At visible light wavelengths, seen by Hubble, the galaxy is extremely compact, with most of the light coming from a region just a few hundred light-years across.

"This galaxy is remarkably efficient," said lead author Jim Geach of McGill University in Canada. "It's converting its gas supply into new stars at the maximum rate thought possible.

"While this galaxy is forming stars at a rate hundreds of times faster than our Milky Way galaxy, the sharp vision of Hubble revealed that the majority of the galaxy's starlight is being emitted by a region with a diameter just a few percent that of the Milky Way," he added.

Most galaxies, like the Milky Way, only use a fraction of their gas to make stars because it's distributed widely throughout, giving the distinctive "knots" of stars in the spiral arms.

In the snappily-monikered galaxy SDSSJ1506+54, nearly all the gas has been driven into the central core, igniting in a powerful burst of star formation.

"We are seeing a rare phase of evolution that is the most extreme - and most efficient - yet observed," Geach said.

And the galaxy is so efficient, that the star formation is likely to be all done and dusted in the equivalent of a few moments in a galactic lifetime. In just a few tens of millions of years, the gas will be used up and the galaxy will mature into a massive elliptical galaxy. ®