Pic Space cadets tittering at the mention of Uranus have a new celestial object to giggle at: a giant penis drawn on the surface of Mars by NASA robots. 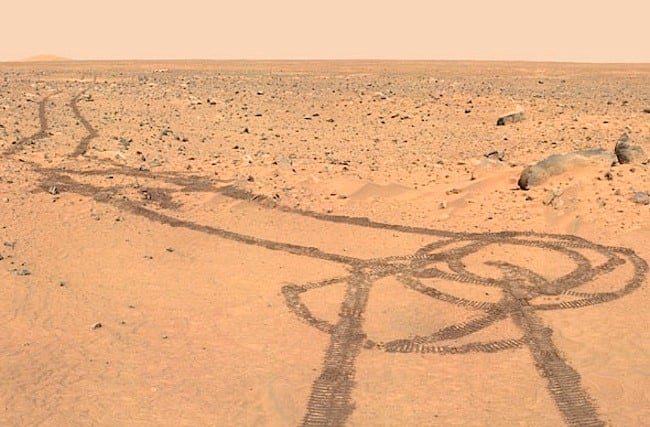 The US space agency's $820m exploration rovers Spirit and Opportunity set out for Mars in 2003 and, once landed in 2004, got busy looking for signs of water, a critical building block for life, on the Red Planet.

But while the Jet Propulsion Lab's pair were driving around, they left criss-crossing tracks in the Martian sand, which appear to sketch out a crude drawing of an erect manhood and testicles.

It is thought the image was an accident, rather than the work of a puerile space boffin. A Redditor spotted the cosmic willy last night, prompting a huge surge of traffic to NASA's web page - which promptly crashed the site. We note the page allows visitors to "enlarge" the image.

The agency's boffins lost contact with the Spirit rover in 2010 after it got stuck in the sands, but Opportunity is still going strong, wandering around a crater named Endeavour and heading towards an area dubbed Botany Bay - near a spot called Nobbys Head. ®