Are WD and Trevor set to be friends at last?

Western Digital makes Network Attached Storage (NAS) devices and recently sent a Sentinel DX4000 to El Reg for review. When I was asked to write about it I was initially unsure exactly how I would approach this: where's the novelty in a small consumer or SME device?

The Sentinel stands out for me not only because it's the first Windows-based NAS I've had the chance to tinker with, but because Western Digital has done a fair bit of customising. While I've developed a certain level of dislike for the Microsoft-provided elements of the NAS, Western Digital went out of their way to make it better and they've impressed me in the process.

The WD Sentinel DX4000 is an attractive little NAS, it measures 208mm X 160mm X 223mm and is made out of reasonably durable black plastic. I say reasonably durable because it can apparently survive being punted halfway across the room (with no visible scratches) when I trip and fall on my desk after taking the thing apart.

It sports a 1.8Ghz Intel Atom D525, 2GB of DDR3, 2x 1GB NICs and can support up to 4x hard drives. The model I was sent for review contained 4x Hitachi 4TB disks, which come out to around 11TB of usable space after everything is said and done.

The RAID is standard Intel RAID and holds up remarkably well, all things considered. Intel's Chipset RAID silicon has come an awfully long way since the last time I looked at it in depth. The front of the array gives you somewhere in the neighborhood of 300MB/sec on big sloppy sequential activity tapering off gracefully in the familiar pattern for spinning rust to do around 175MB/sec at the end of the array.

This means that the drives provided (and their attached controller) are actually capable of delivering consistently above the maximum output of a single 1 gigagbit NIC. The second NIC starts to make a lot of sense in this situation and it places the Western Digital Sentinel DX4000 among the best performing SMB NASes I have had the opportunity to work with. 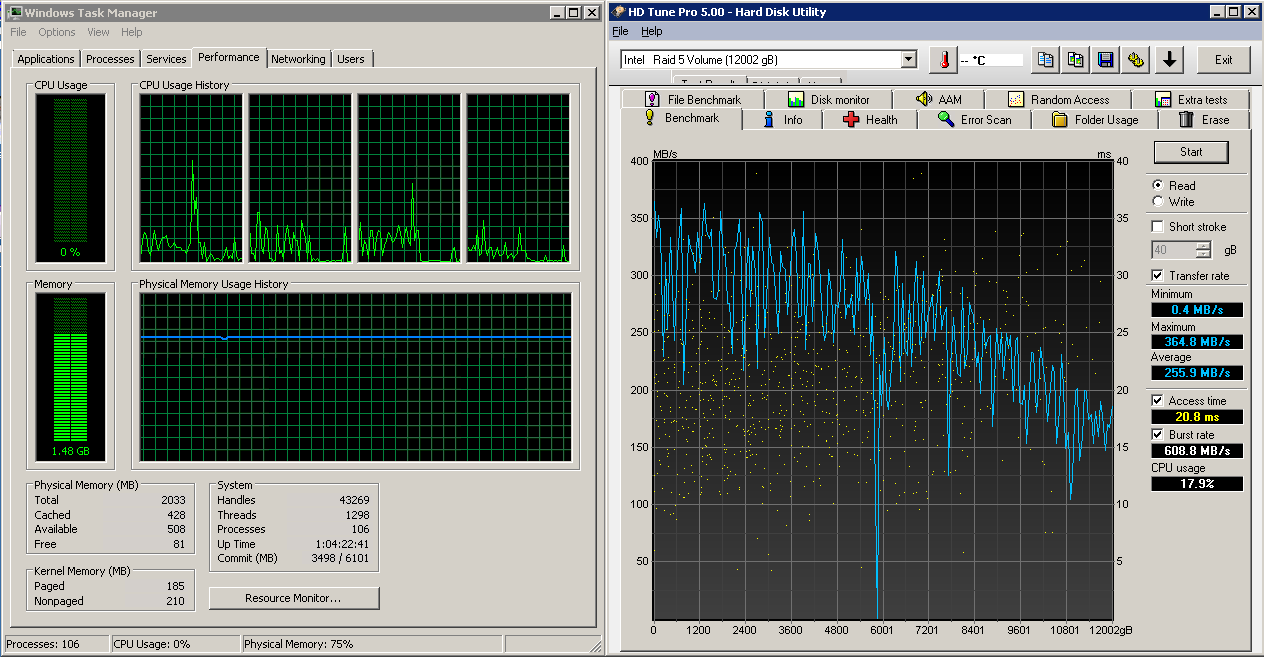 Not bad for an SMB NAS (click to enlarge)

Straight RAID access doesn't impinge upon the CPU all that much; the Atom is well-specced for all the basic tasks asked of it. Boot 30 VMs from iSCSI LUNs, however, and you'll absolutely flatten the CPU and drop disk throughput to about 75 MB/sec as the heads fly across the platters searching for the blocks they need.

Nothing surprising there, except that I managed to boot 30 VMs off a Windows-based SMB NAS without the iSCSI target falling over or the system crashing. That Starwind iSCSI target holds up well; in fact, the overhead when you aren't needlessly torturing it for fun is minimal. I was cheerfully able to use a more reasonable 10 VMs comfortably, with any one VM happily able to pull enough I/O off the server to completely saturate one of the 1 GB NICs. 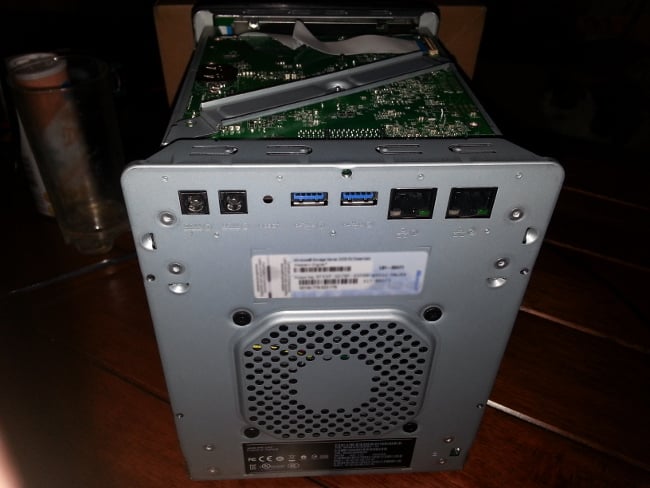 Note the redundant power ports on the upper left

It has been said that a camel is a horse designed by committee. Windows Storage Server is a NAS designed using the same process. Now, much of the issues encountered with setting this unit up were entirely my fault. If you follow the process to the letter it actually works as described.

Still, there is zero robustness in the install process. Screw up even a little bit and you trigger an array rebuild. The system will absolutely refuse to do anything until the rebuild process is complete and a rebuild of four 4TB 7200 RPM drives takes over four days.

This isn't Western Digital's fault; someone produced painstaking documentation on how to do things exactly the right way. It doesn't always work out that you get that option, however, and that's where my beef with the software choice comes in.

I'm also none too happy about the part where you need a fairly fully patched Windows or OSX client with client software to get through the install setup. I would have hoped the system contained an inbuilt flash disk for the OS, however it has to be installed to the RAID after your add the disks. (It creates a 60GB Windows partition and leaves the rest for data.) In truth, I probably can't hold that against Microsoft too much; even Synology requires you to load the OS after you jam disks into the thing. 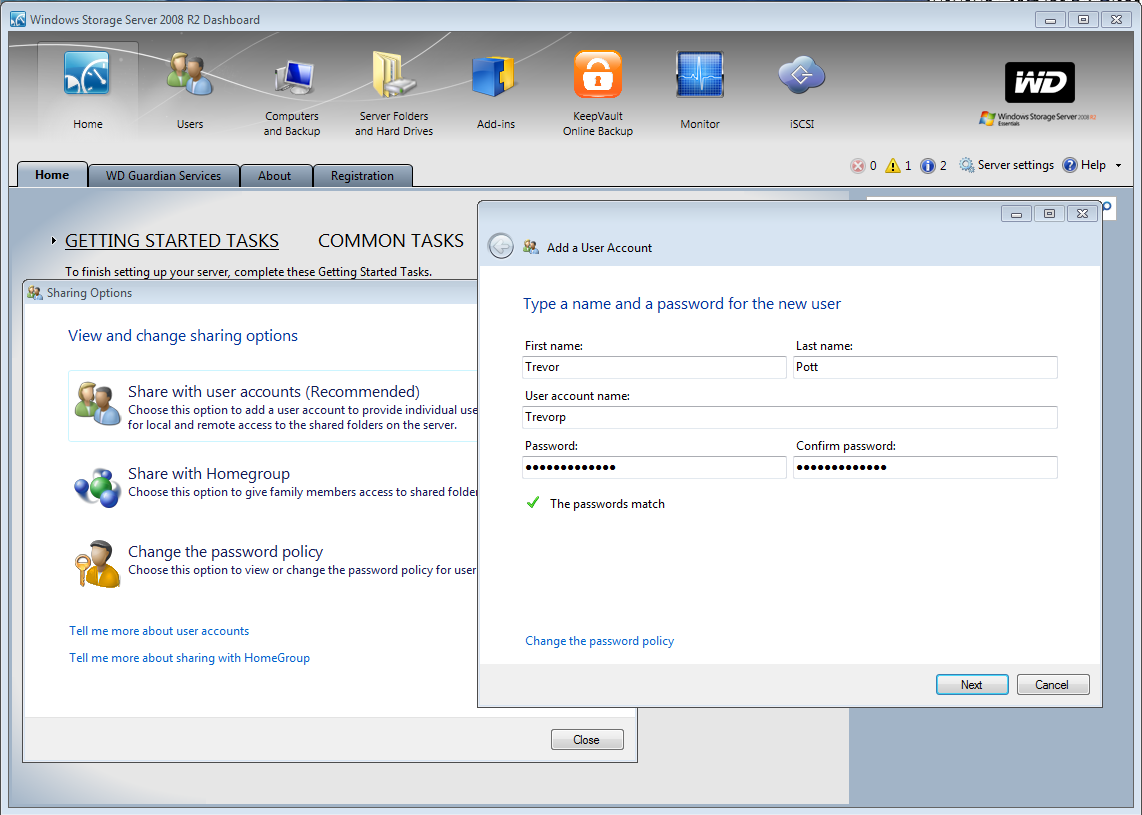 The dashboard actually works pretty well as a simple interface

What really gets my goat, however, is the part where managing and maintaining the NAS "by the book" requires you to use a client-side application. The web app on the NAS is a primitive interface for shuffling files around. If you want user management, share management or iSCSI Management you have to use the dashboard client which feels a bit like chiseling your commands into a stone tablet then ganging up a bunch of swallows to carry the thing off.

That said, Windows Server 2008 R2 - regardless of edition - is a great storage OS. It works just fine as a stand-alone workgroup-class NAS, or it can join your domain to ensure that your user management is somewhat easier. Pay heed to Microsoft's licensing requirements, however: Storage Server Essentials has a limit of 25 users.

Also, do remember that for all the official limitations on this server, Windows Storage Server 2008 R2 Essentials is still Windows Server 2008 R2. You can RDP into it. You aren't supposed to be mucking about in there, but when has that ever stopped any of us?

Some things are just bizarre

Computers that have the Windows Storage Server 2008 R2 Essentials Launchpad installed show up in the management interface. This is apparently so that when you have everything set up properly you can not only access the Sentinel DX4000 over the internet, but the hard drives of all the joined-up computers, too. Only if you have IE, of course, because it uses an ActiveX control.

I can at least see some utility in Microsoft's "Remote Web Access" feature, (though you will engage this functionality on any network I control only if you have successfully dispensed with me first). What I find truly bizarre is that for some inexplicable reason the management software flags up an alert because internet connection sharing isn't enabled on my notebook. I don't even want to know why. 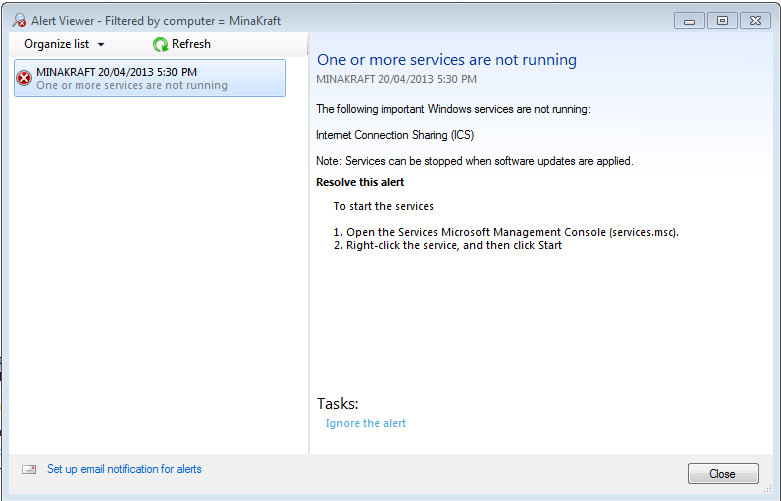