Ubuntu 13.04: No privacy controls as promised, but hey - photo search!

A lot of stuff's missing, but the tweaks make a difference, honest

First the bad news: most of the big new features planned for Ubuntu 13.04, or Raring Ringtail, haven’t made it – they’ve been pushed back to 13.10, due in October. Despite this, the Ringtail is actually rather good.

Assuming you're a fan of the Unity interface and got past the privacy fiasco of last year - either because you’ve become comfortable with Canonical sending your desktop search queries to Amazon and others or have simply disabled the feature - Ubuntu 13.04 packs a number of new features, big and small, that make it well worth the upgrade.

First, though, it’s worth nothing what hasn't made it into 13.04. This includes the planned Smart Scopes feature. Smart Scopes are part of Canonical's long-term plan to make the Unity Dash as much a web-search interface as application launcher. The goal is to add some 100 different search providers to the Unity Dash, allowing you to search everything from websites like IMDb and DeviantArt to your browser bookmarks, Tomboy notes and more.

Unfortunately, Ubuntu developers have deemed Smart Scopes too unstable for 13.04. The new plan is to ship it with 13.10 in October. If you simply must have them, you can install Smart Scopes, but - be forewarned - they are buggy and unstable.

The setback for Smart Scopes has led to a secondary casualty - the planned improvements to Ubuntu's privacy settings. The outcry from privacy advocates about last year's Amazon Search Lens controversy prompted Ubuntu founder Mark Shuttleworth to promise that future releases would offer more fine-grained privacy control and an easy way to opt out of individual search tools. 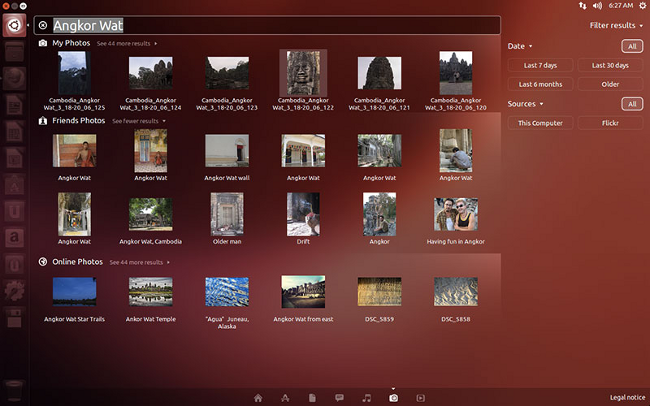 All your images R belong to us: the Photo Search Lens draws on photos in Shotwell, Flickr, Facebook and Google

The plan is to add something that's a bit like the private browsing mode available in web browsers, but - like Smart Scopes – it, too, has been pushed back. Like Ubuntu 12.10, Raring Ringtail's privacy panel still only offers the all or nothing "include online search results" toggle.

It's too bad that the new privacy features didn't make the cut for this release because one of the best new features in the Unity dash is the new Photo Search Lens, which taps not just any photos you have in Shotwell, but any images you've uploaded to Flickr, Facebook or Google. To make it work though, you'll have to turn on the "show online search results" option, which means you'll also see the much-maligned Amazon results.

The killer feature that makes the case for web-based search

It's almost worth it, though, because the Photo Lens is the kind of very cool new feature that makes Unity momentarily less annoying and almost convinces you that putting web-based search in the Dash is a good idea. And then you search for something else and suddenly your results are littered with irrelevant Amazon search results. One step forward, two steps back.

The Photo Lens also indirectly showcases a nice new feature in the settings panel - the Online Accounts pane. The Online Accounts pane makes it easy to keep track of all your accounts in one spot and allows any apps that need access to pull from the same, single source. Among the providers are Flickr, Yahoo, Google, Twitter, AIM and Windows Live. 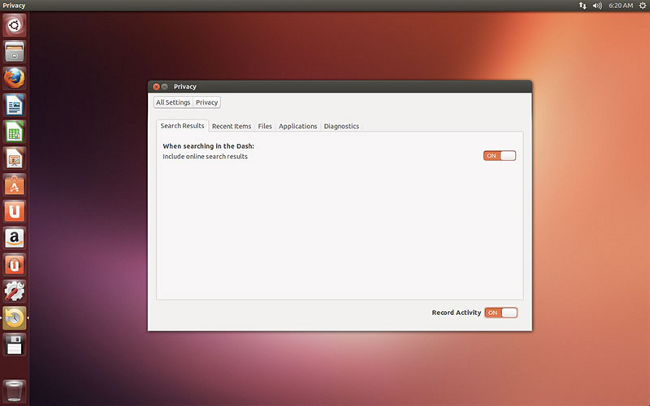 All or nothing: Raring Ringtail's privacy settings still only basic options

Unfortunately, there doesn't seem to be support for self-hosted accounts like OpenPhoto or OwnCloud. Also note that only some apps are connected to this system. That means that when searching the Photo Lens your local results will consist of only those images Shotwell is aware of, not, for example, any photos you've got in more serious photo apps like Darktable.

However, cool as the Photo Lens is, unless you really love Amazon search results in your Dash, you're better off skipping the Photo Lens until the Smart Scopes and better privacy controls land later in 13.10 or you uninstall the Amazon Lens.

There's another missing feature you may notice in Ubuntu 13.04. The Ubuntu One Music Store has been ripped out of Rhythmbox, Ubuntu's default music player (the plugin is gone from Banshee as well). The music-player based version of the Ubuntu Music Store has been retired in favor of the web-based store, which debuted just before Ubuntu 12.10 last year.

Next page: Missing the music
Page:

Decent upgrade from older versions, essential if you're still on OpenOffice
Applications3 Feb 2023 | 34