Analysis Bezos & Co's cloud looks likely to turn over at least $2bn in 2013 and potentially much more – a fact sure to put the frighteners on traditional IT suppliers scrabbling to come up with their own as-a-service infrastructure products.

If earnings for Other for 2013 follow the standard pattern of not falling below Q1's amount throughout the year – and we think they'll actually go up significantly – then Other is set to book a minimum of $3bn in revenue for the year, and probably closer to $4bn.

Like all cloud companies, those sneaky Amazonians don't want to make it easy for competitors, the press, and financial firms to analyze cloud revenues, so the North American Other category folds AWS revenues in with co-branded credit card agreements and advertising services.

But we believe the rapid expansion in revenues in Other since the mid-2006 introduction of the storage service (S3) and the compute service (EC2) point to major growth within AWS. We have neither seen nor heard of any compelling evidence for dramatic advertising growth and, given the woeful state of the ad industry with falling rates at Google, we doubt it's growing like a weed.

In talking with industry insiders, CEOs at other cloud companies, and analysts, we here at Vulture West have come to believe that AWS represents at least 75 per cent of "Other", and could even be higher – one source told us in late 2012 that they expected AWS would run to $2bn in 2012 out of total revenues of $2.385bn. 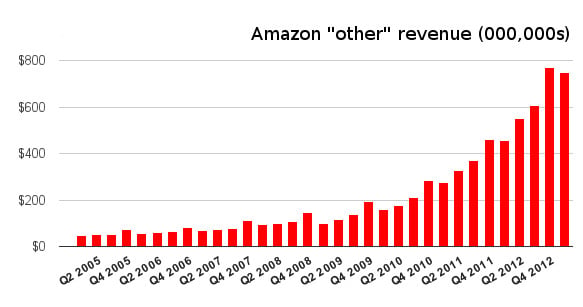 By our reckoning, that puts AWS on track to make Amazon a shade over $2.25bn in 2013 in the unlikely scenario that we see no quarter-on-quarter increase, and potentially much more if there's quarterly growth like in past years.

Another indication for the growth of AWS lies in the dramatic increase in the amount of objects being stored in the S3 cloud, which shows a major year-on-year increase in use of the service, going from a shade under a trillion stored objects in early 2012 to "over" 2 trillion by Q2 2013. 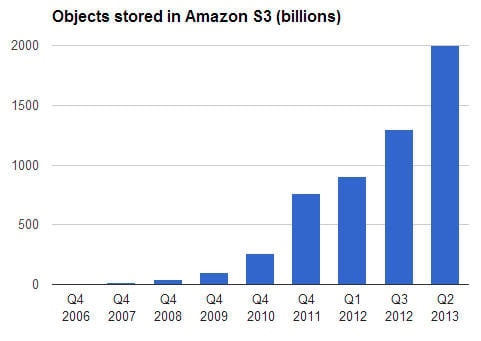 More and more Amazon S3 objects are being stored as well

Besides the storage growth, the company added 159 features and services to the cloud in 2012 – an example that Bezos highlighted to shareholders in the company's annual report as an example of "internally driven motivation".

But though some of these new features – Glacier, Redshift, Trusted Advisor – may drive new revenue, we believe that the growth in AWS has more to do with the 27 price cuts the company has enacted since launching the service in 2006. This scorched-earth pricing strategy has led to an ongoing race to the bottom on cloud prices between Amazon, Google, and Microsoft, and has spawned a wave of startups that wouldn't exist were it not for these clouds.

So next time you tune into Netflix, save a file in Dropbox, or spin up an application on Heroku, bear in mind that each time you use one of those services you lead to a higher spend on AWS, and enlarge the scale advantages the cloud can use when putting the pricing-frighteners on its competition. ®