Ubuntu without the 'U': Booting the Big Four remixes

Review It's the end of April, so that means that there's a new release of Ubuntu. Well, actually, no - it means that there are eight of them. Don't like standard Ubuntu's Mac-OS-X-like Unity desktop? Here's where to look.

There are umpteen "remixes" alongside the eponymous distro. These mostly differ by having a different desktop - and therefore overall look and feel - but also in some cases different preinstalled apps. There are more than one hundred - many moribund, very specialised or otherwise of little interest - but seven enjoy official recognition. I'm going to look at the "Big Four" - Kubuntu, Xubuntu, Lubuntu and Ubuntu GNOME. All have a different interface from the standard distro, meaning something for everyone.

There are three other "official" variants, too, that are special-purpose editions: Edubuntu, Mythbuntu and Ubuntu Studio. These focus on particular niches and if you're not into that area then they're not of any great interest. Edubuntu targets education and uses the standard Unity desktop with a bundle of software for kids. There's also the distro with the slightly odd name of Mythbuntu - so called because it's based around MythTV - it's a version of Ubuntu with a "ten-foot user interface" for a converged PVR/home-theatre PC.

Ubuntu Studio, meanwhile, is aimed at media creators, with a low-latency kernel and suites of tools for people working with audio, graphics, video, photography and publishing. Mythbuntu and Ubuntu Studio both use the same Xfce desktop as Xubuntu.

Under the skin, though, all the "buntus" are the same OS - so they all have much the same compatibility requirements and will run the same applications. The main differences are how they look, how you control them and (to a degree) how powerful a PC you need. All come with pleasant touches like system-update monitors, something rival distros often miss - and unlike some other distros, upgrades from one version to the next are easy and supported.

Kubuntu is the oldest and biggest of the general-purpose editions. It is Ubuntu with KDE 4.10 instead of Ubuntu's GNOME-based Unity. KDE and GNOME have rather different philosophies, and admirers of one tend to dislike the other. As soon as Ubuntu came out, KDE advocates protested Canonical's decision to use GNOME, and Kubuntu appeared along with Ubuntu's second release, 5.04. 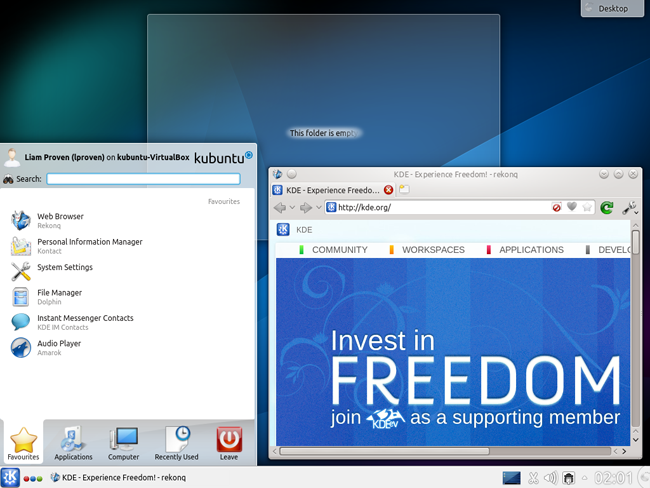 KDE is more Windows-like than even GNOME 2 was: at the bottom of the screen is a taskbar with a launch menu, a few quick-launch icons, text-labelled buttons for each running app and a notification area for tray icons and so on. Everything is very colourful and shiny: buttons are surrounded by a glow effect, windows cast shadows and go transparent when moved, and there's copious translucency, soft blends and so on everywhere. I found it overpowering, busy and confusing.

As well as a desktop, KDE includes a whole suite of apps - indeed some of its fans refer to it as the KSC, the KDE Software Compilation. This includes KDE's own web browser, email and chat clients, office suite and so on - almost all of them with the letter K wedged into their name somewhere. Kubuntu favours the KDE apps for almost everything; its sole concessions are LibreOffice instead of KOffice and a menu option to install Firefox. All the standard Ubuntu apps are in the repositories, though, so if you prefer, you can replace Rekonq with Firefox, Kmail with Thunderbird and so on. 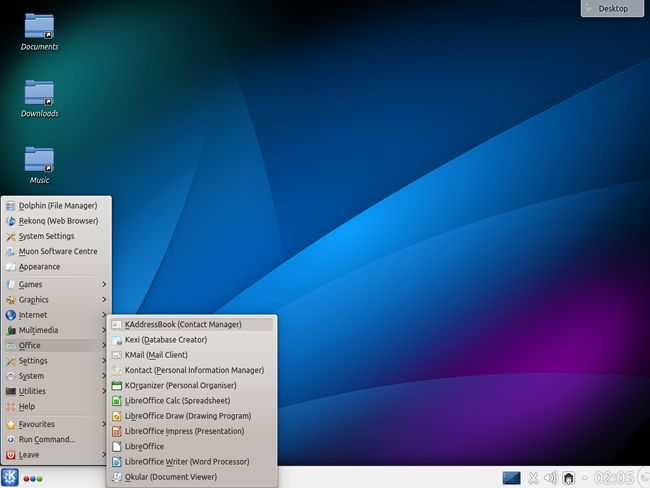 If you like KDE, Kubuntu is a pretty decent 'buntu, but I wouldn't recommend KDE for a novice. Its developers' fetish for configurability means that it is festooned with options to twiddle, and some of its behaviour is a bit odd. For instance, desktop icons are held in a special folder that floats above the actual desktop. The desktop can be augmented with "Plasma widgets", as can the panel, and instead of virtual desktops there are "activities", allowing you to put windows and plasma widgets into functional groups. In an era where computer interfaces are growing simpler, KDE is complex - but if you want something basically Windows-like but extremely customisable, it's a good choice.

The next oldest 'buntu, Xubuntu, uses Xfce 4.10. The Xfce desktop started out as a FOSS clone of CDE built around Xforms, but it has moved away from that. It now resembles a lighter-weight GNOME 2 - it's even built on Gtk2 - but with the task-switcher panel at the top of the screen by default and the bottom panel tweaked into an app launcher in the style of an auto-hiding dock. It's easy to rearrange this into GNOME 2's classic two-panel arrangement, though, or into a Windows-style single taskbar. 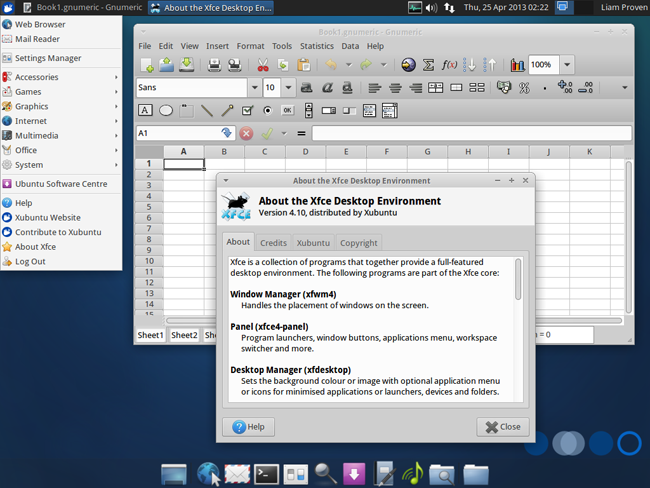 Xubuntu's default desktop has a top panel with an app menu and a switcher, and a bottom panel configured as a dock-like app-launcher.

Xfce is lighter than the big-name desktops and so Xubuntu needs fewer resources - and is a bit nippier - than its older siblings. It also uses the more basic Abiword and Gnumeric office apps rather than LibreOffice, but the latter's easily installed. Xfce's window manager also spurns fancy 3D desktop effects, and is sprightly on 2D hardware or in a VM. 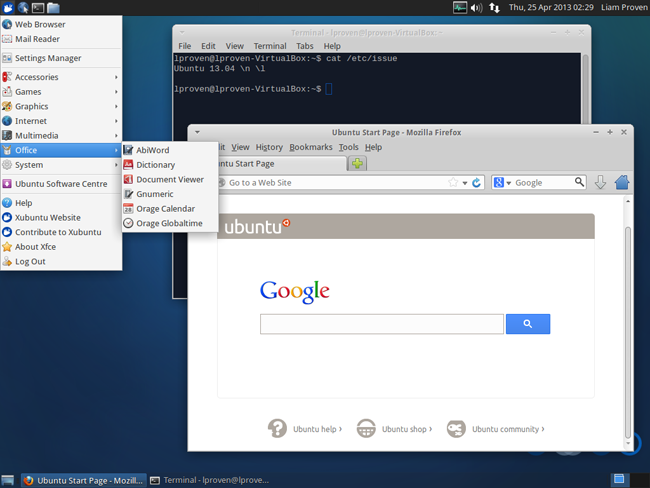 If you miss the GNOME 2 look and feel of Ubuntu prior to 11.04, Xubuntu's your the best option out of the officially sanctioned editions.