Amazon Web Services will not build you a private copy of its own cloudy infrastructure for your own use, and it believes, as its top brass reiterated again last week, that there is no such thing as a private cloud.

But don't tell Eucalyptus Systems that. The company was founded to try to clone AWS, and with its 3.3 release, it is adding more features that will give your private cloud the look and feel of AWS.

The Eucalyptus cloud controller was once the darling open source cloud controller before OpenStack came along, and for many customers, explains Marten Mickos, CEO at the company by the same name, Eucalyptus is still popular because it is trying to provide the look and feel and function of the Amazon cloud while OpenStack is really going its own way. Citrix Systems, which is offering up its CloudStack alternative to open stack is also keen on providing API compatibility with Amazon Web Services as a means of putting some water between itself and OpenStack, which is not as keen on API compatibility with AWS.

"The roar in the industry for OpenStack is enormous," Mickos concedes to El Reg, "but that Amazon compatibility is a real differentiation for us."

With the launch of the Eucalyptus 3.3 controller, the eponymous company is focusing less on APIs and more on providing equivalent services in private clouds that are available on AWS.

The first big new feature that mimics functions on AWS is auto-scaling, which as the name implies can scale up the servers in an auto-scaling group as workloads on those servers increase and decrease. Generally, you group web servers into one auto-scaling group, app servers into another one, and databases into yet another. By doing it this way, each part of the n-tier application can scale up (and down, don't forget down) independently as their specific loads change. This is a much better approach than creating replicas of n-tier applications with static ratios between web, app, and database servers. The auto-scaling feature of Eucalyptus 3.3 allows you to create policies under which each auto-scaling group can snatch more resources on the cluster; the auto-scaling APIs are clones of those used by AWS, and says Mickos were created not just using a black-box methodology but with some help from Amazon itself. 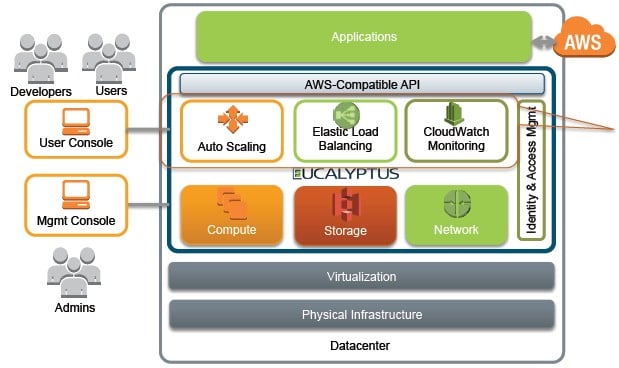 How the Eucalyptus cloud controller stacks up

The second new feature Eucalyptus is adding to is cloud controller is elastic load balancing, which is a round-robin load balancer that is, once again, compatible with the APIs that distributes incoming application traffic across the auto-scaling groups in a private cloud as users whack those apps.

The third major new feature in the control freak is called CloudWatch, and like the similarly named service on AWS, this is a monitoring service to programmatically collect telemetry on running virtual machines and their software as well as set alarms, do trend analysis, and set policies to keep the cloud all fluffy and perfect. While the Eucalyptus CloudWatch is not a perfect clone of the AWS CloudWatch, Mickos say that the look and feel between the two is actually closer than, say, Microsoft Office and OpenOffice. But there is one important thing to remember. Amazon's CloudWatch console cannot reach down into a Eucalyptus cloud and manage it.

If you want to manage both chunks of the AWS public cloud and a Eucalyptus private cloud, you can do it, says Mickos. Amazon open sourced the client-side console it created for its GovCloud for the US government as the Elastic Wolf, and this tool can manage both AWS and Eucalyptus clouds. (Why isn't Elastic Wolf the default console for any AWS-compatible cloud? Good question, and the answer has to be it has more limited functionality or it would already be the default.)

In addition to ramping up Amazon-like services for private clouds, Eucalyptus is expanding the range of EC2 instance sizes it supports on private clouds. (You have to clone the APIs, the services, and the virtual machine horsepower to be a true clone.) With the Eucalyptus 3.2 release in December, the company had support for clones of the EC2 m1.small, c1.medium, m1.large, m1.xlarge, and c1.xlarge instances, and with the 3.3 release, is it adding eleven more EC2 instances, ranging from the t1.micro with one core, 5GB of so-called "ephemeral" local disk capacity, and 256MB of virtual memory at the low end to the hs1.8xlarge instance with 48 cores, 24TB of disk, and 117GB of virtual memory. (Ephemeral disk evaporates when the instance is shut down, rather than persistent object or block storage, which is also available as clones of S3 and EBS services inside of Eucalyptus.)

There are a few more goodies. Eucalyptus 3.3 has a maintenance mode that allows for node controllers in the cloud that have been virtualized to be live migrated, either atop VMware ESXi or Red Hat KVM, to backup node controllers without taking the cloud down. A physical server being used as a node controller can therefore be taken down and fixed without interruption to the private cloud. The resources running on Eucalyptus clouds can also be tagged like wild animals and tracked by their tags, which are stored in metadata wrapped around the virtual machines. (This feature is called resource tagging, of course.) Eucalyptus also supports the Netflix Asgard web interface for AWS, which the movie and TV show distributor open sourced three years ago.

Eucalyptus 3.3 will be available in May, and all of these new features will be provided in a subscription, which costs $2,000 per node per year.

So how is Eucalyptus doing? The company now has 80 employees, and has hundreds of clouds in production that it can identify and on the order of 10,000 clouds that are doing proofs of concepts. Mikos says it is tough to tell the production clouds from the tire kicking since it doesn't do any tracking from within the software. (This sort of thing is frowned upon in the open source community.) The clouds range in size from eight nodes with dozens of virtual machines to the largest customer currently paying Eucalyptus Systems, which has a test/dev cloud with over 12,000 cores.

"We are very well funded and have a long runway," says Mickos, adding that the tail end of last year was a little tougher than expected but that the growth it expected to see at the back-end of 2012 is happening here in early 2013. ®

We told you remote working is quite good, says Citrix as its numbers head higher