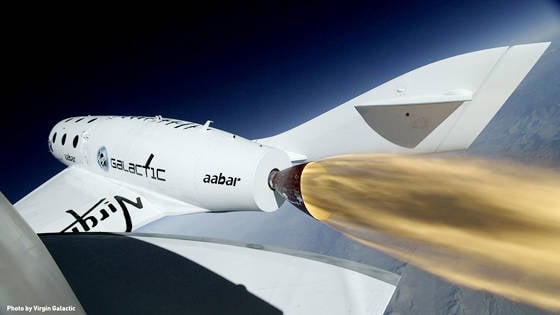 "For the first time, we were able to prove the key components of the system, fully integrated and in flight," Branson said in a release announcing the Monday flight. "We saw history in the making today and I couldn't be more proud of everyone involved."

The test began at 7:02am on Monday morning, when the SS2 and its carrier aircraft, the WhiteKnightTwo, took off from the Mojave Air and Space Port in Mojave, California. Both the SS2 and WhiteKnightTwo were designed and built by Burt Rutan's Scaled Composites for Virgin Galactic's wholly owned subsidiary, The Spaceship Company.

About three-quarters of an hour after takeoff, when the pair had reached about 47,000 feet, the SS2 was released and pilot Mark Stucky and copilot Mike Alsbury fired up its rocket engine for a 16-second burn that took it to 55,000 feet and a maximum velocity of Mach 1.2. Ten minutes later, the SS2 landed back at the Mojave Air and Space Port runway.

Today's flight was a long time coming. Branson began talking about his ideas for space tourism as early as 1999, and attracted such potential passengers as Sigourney Weaver and William Shatner after Rutan won the $10m Ansari X Prize with his SpaceShipOne, funded by Microsoft founder Paul Allen, in 2004.

Shatner, however, later relented, saying, "I'm interested in man's march into the unknown but to vomit in space is not my idea of a good time. Neither is a fiery crash with the vomit hovering over me."

Captain Kirk need not have worried that his lunch would be put under duress anytime soon. As The Wall Street Journal points out, Virgin Galactic's space-tourism flights were originally scheduled to have begun in 2008. Didn't happen. The target date was then moved to 2010. Again, nope. Revision number three put liftoff in 2012. Another deadline missed.

But let's not carp; the road to today's successful test has been fraught with obstacles, including a tragic accident in 2007 in which three were killed and three badly injured, and a "touch and go" runway smackdown of WhiteKnightTwo in 2009.

Now, the WSJ says, Virgin Galactic and Branson are declining to give a firm date for when their sub-orbital space tourism might begin, but earlier reports put the start of commercial operations at late this year or sometime in 2014.

Whenever it should occur, however, Branson plans to be aboard the first six-passenger flight that will achieve a 60-mile altitude while traveling at 2,500 miles per hour – along with his two children, "if my wife allows." ®