Hotmail addresses may live on, but the service we once knew as Hotmail is no more, now that Microsoft has transferred all 300 million active Hotmail accounts to its new, modernized Outlook.com webmail offering.

"We want to give a huge 'Thank you' to all of you who have supported Hotmail over the years, for some of you, that's going back as far as 1996," Microsoft's Dick Craddock eulogized in a blog post on Thursday. "It has been an amazing journey and we've been honored to provide you with a great mail experience for many years."

Redmond first began signing up new users for Outlook.com in July 2012, while giving them the option to switch back to Hotmail if they didn't like the new service. In February 2013, it announced that it was officially taking Outlook.com out of preview and boasted that it had already signed up 60 million users. But that still left hundreds of millions of users on the old Hotmail system.

Microsoft had always warned Hotmail users that their accounts would be migrated to Outlook.com eventually; it just didn't say when that would happen. As it turns out, there was good reason for that, because moving all of the Hotmail data over to the new system was no trivial matter.

"This meant communicating with hundreds of millions of people, upgrading all their mailboxes – equaling more than 150 million gigabytes of data – and making sure that every person's mail, calendar, contacts, folders, and personal preferences were preserved in the upgrade," Craddock wrote.

Did you catch that? He said 150 million gigabytes. That's 150 petabytes to you and me.

"Of course, this had to be done with a live site experience that was handling billions of transactions a day," Craddock continued. "This made the magnitude of the process incredible, maybe even unprecedented."

According to Craddock, once the "go" sign was given, the Outlook.com team was able to complete the full migration in around six weeks.

Mind you, things didn't go quite as smoothly as Craddock suggests. During the upgrade period, both the Hotmail and Outlook.com services were hit with multiple, prolonged outages, and many Hotmail users reported being locked out of their accounts as Microsoft moved them over to Outlook.com. Now that the migration is complete, such headaches will hopefully be things of the past – fingers crossed.

Craddock says that with the Hotmail transition completed, Outlook.com now boasts some 400 million active accounts, including 125 million that are accessing their mail, contacts, and calendars on mobile devices via Exchange ActiveSync. 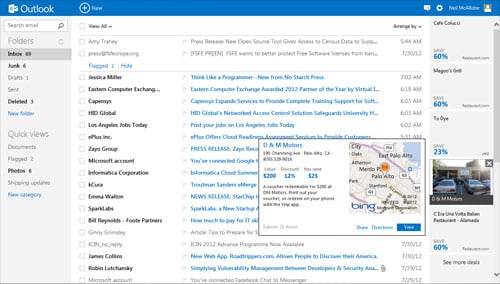 Hotmail users had better like the new Outlook.com UI, because it's all they'll get from now on

What it means for Hotmail users is that although they will be able to keep their @hotmail.com addresses, starting on Thursday they will see the Outlook.com UI rather than the familiar Hotmail one, and unlike before, they will no longer be able to revert their accounts to the old style if they don't like the change.

"Our belief is that as people start using the new experience, they will come to love it even more than they loved Hotmail," Craddock writes.

Obviously, not every Hotmail user will agree, but such is the way of things on the wild, wild web.

Let me be honest with you Hotmail- ever since you changed to Outlook, you've been a massive prick.

In addition to migrating the remaining Hotmail accounts, Microsoft has added a couple of new features to Outlook.com.

You were always able to use other email accounts as aliases for your Outlook.com account, but previously messages sent from the other accounts would have From fields that said they came from your Outlook.com address "on behalf of" your other address. With the new SMTP Send capability, Outlook.com will deliver emails sent from a different account using that account's SMTP server. The result is that they look like they just came from that account – no more "on behalf of."

The second new feature is improved integration with Microsoft's SkyDrive cloud storage service. You can now select files from SkyDrive to send to email recipients from right within the Outlook.com UI. The files are sent as links to SkyDrive, rather than as attachments, so the resulting emails take up less space in the recipient's Inbox. And the Outlook UI automatically grants each email recipient the right SkyDrive permissions to access the files.

According to Craddock, the SMTP Send feature is available worldwide as of Thursday, but rolling out the SkyDrive integration to all users will take a little longer: something in the realm of a few weeks. Naturally, he also promises "much more to come." ®