SMART brings out 2.5-in, 2 terabyte block-o-Flash to rival sTec

You can't smoke enterprise SSD, but get your pipe out

It's an extension of its 2.5in Optimus SSD line, called the Optimus Echo. Unlike the Optimus Ultra and Ultra Plus SSDs which use Toshiba 24nm MLD (2-bit) NAND the Echo uses smaller cells built using 19nm NAND, presumably from Toshiba still.

The largest Optimus Ultra goes up to 1.2TB but the Echo runs from 200GB all the way to 2TB capacity. Its random IOPS performance is 100,000/45,000 for reads and writes respectively and its sequential performance is 500MB/sec for both reads and writes. The thing's endurance is 10 full drive writes a day for five years, which contrasts with the Ultra's 25 and Ultra Plus; 50 full drive writes/day.

It has a 6gig SAS interface like the other Ultras, plus AES encryption. 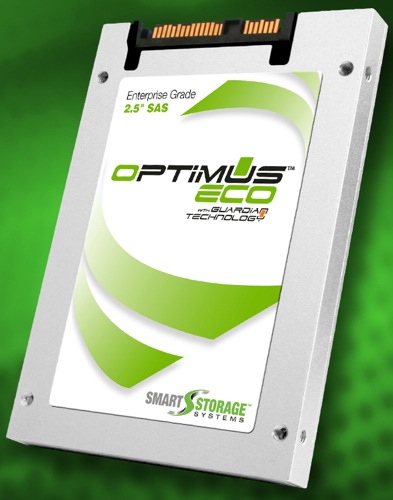 Toshiba itself, as far as we know, doesn't have SAS interface 19nm SSDs - though it does have SATA interface ones. Gentleman's agreement, maybe?

SMART says the product will bring about "a dramatic reduction in storage total cost of ownership (TCO)" and it will be generally available in June. OEM pricing for the drive starts at a dollar under $4,000. ®