It takes one to know one

Stackdriver, yet another entrant into the increasingly crowded cloud-monitoring racket, has uncloaked from stealth mode and fired off its Intelligent Monitoring tool to babysit applications running on the Rackspace Cloud and Amazon Web Services heavenly infrastructure.

For his part, Belcher was a program manager at Microsoft and ran VMware's professional services practice in New England as well as being director of product management at Sonian, a cloud backup service. Stackdriver is based in Boston, and has nabbed $5m in Series A funding from Bain Capital Ventures.

Stackdriver hired a bunch of development and operations gurus (DevOps, in cloud lingo) from HubSpot, Acquia, VMware, Microsoft, EMC, Oracle, and Red Hat to create a management and monitoring tool that had deep analytics and machine learning to help admins figure out there are going to be problems before they hit.

The company's Intelligent Monitoring tool runs on AWS itself and relies heavily on an analytics engine that runs on Amazon's Elastic MapReduce service. It pulls data out of CloudWatch and the APIs for various AWS services such as EC2 compute and S3 object storage and their equivalents on the Rackspace Cloud. If customers want to get more-detailed telemetry, there's a Stackdriver system-level agent they can load on the operating systems in their virtual machines to see what the operating systems and applications are doing as they run. The main job that Intelligent Monitoring has to do is use machine-learning algorithms to figure out what is normal, look for anomalies, and alert admins. 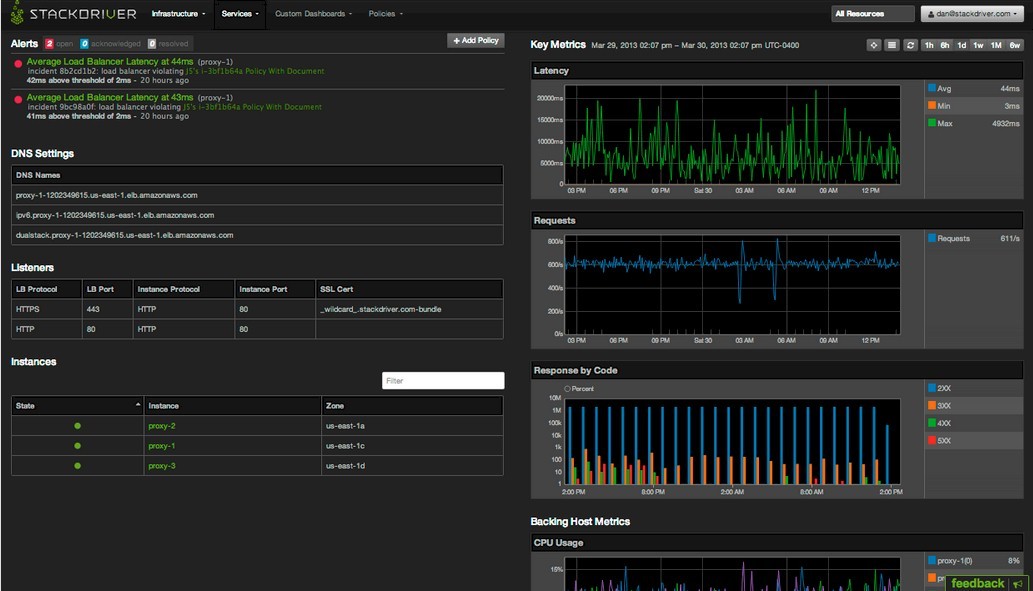 The portal for Stackdriver Intelligent Monitoring (click to enlarge)

The company got its start when the cofounders did a survey of about a hundred of the largest users on the Rackspace and AWS clouds to figure out how they were monitoring and managing their infrastructure.

"Contrary to popular opinion," Belcher explained to El Reg, "these companies are not using commercial tools, but rather cobble together a few open source tools and do a lot of scripting."

This infrastructure is managed by DevOps people, who want a SaaS tool if they can get it, and who want to have a monitoring tool that knows how to play nanny to all parts of the infrastructure stack, not just a server, switch, or storage array.

Stackdriver's Intelligent Monitoring service has been in a private beta for the past several months, and is now in public beta. As El Reg goes to press, the company has more than a hundred companies that have signed up for the public beta.

Belcher says that Intelligent Monitoring should be available this summer under a subscription pricing model, and adds that Stackdriver will offer a freebie version of the tool to build a base of potential subscribers. The company has not yet decided what features will be in the for-fee version of Intelligent Monitoring, nor has it settled on pricing. You can sign up for the beta here.

Stackdriver has 15 employees, including Belcher and Azeri, with nine of them being software engineers and three being part-time sales people. With the cash from Bain Capital Ventures, Stackdriver will be ramping up to expand the product and do a lot more sales. ®