3D printer spits out CYBORG EAR... but where will you PUT it?

We really do have the technology

Princeton's finest boffins have managed to print out an ear, and it's not just a simple prosthetic, it's actually an enhancement with a radio antenna built in.

The process of combining electrical circuits with flesh is fraught with difficulties, and building ears is a common challenge given the complexity of shape and their propensity to become torn off or damaged. So the team at Princeton University attempted to solve both problems by using a 3D printer to create a pair of ears and embedded a radio antenna for good measure. 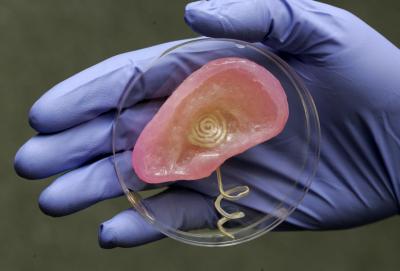 Creating organs normally involves building a scaffold and letting the cells grow over it, but humans ears are too complex for that to be effective and there's no opportunity to embed electronics either. So the team used a modified Fab@Home printer to deposit layers of cells (derived from calves) and silicon. The latter was infused with nano-particles of silver to create the conductive antenna, which was tested receiving radio frequencies from 1MHz right up to 5GHz. That's not even the impressive bit.

"Biological structures are soft and squishy, composed mostly of water and organic molecules, while conventional electronic devices are hard and dry," explains one of the paper's authors, "The differences ... could not be any more pronounced."

The ears weren't just printed out and tested for sound and radio reception, they were also compared to bits of dog bone for strength and regularly tested over 10 weeks to ensure they remained biologically viable, which they did.

The full paper (PDF, requires registration but surprisingly readable) goes into a good deal more detail on the testing, as well as pointing out the potential of the technique to embed sensors in replacement body parts of all kinds.

Not that this will be happening imminently, even if one had an ear with an integrated radio antenna there's nowhere on the human head for it to be plugged in. The exposed wires in this prototype could be tied into a nerve or two, but would still require a radio circuit to be useful, and even then the potential is limited.

But the ability to combine electrical and biological stuff is interesting for all sorts of reasons, and certainly demonstrates that 3D printing has more interesting applications than malformed novelties and copyright abuse. ®