A quartet of Harvard University reseachers have designed, manufactured, and flown a tiny, fly-inspired aerial robot that could be the forerunner of swarms of drosophilistic drones.

To put their achievement in boffinary terms, as did the authors in the abstract of their paper, published in the latest issue of the jounal Science, "We developed high-power-density piezoelectric flight muscles and a manufacturing methodology capable of rapidly prototyping articulated, flexure-based sub-millimeter mechanisms."

And it took them a dozen years to do it. "This is what I have been trying to do for literally the last 12 years," one of the paper's authors, engineering and applied science professor Robert Wood, said in an announcement by Harvard's Wyss Institute for Biologically Inspired Engineering, where the work was done.

You might reasonably ask why it took so long. Simple: there are no off-the-shelf parts you can use to build what the paper describes as "an 80-milligram, insect-scale, flapping-wing robot modeled loosely on the morphology of flies." Or, as one of Wood's fellow authors Pakpong Chirarattananon, calls it, the RoboBee.

"We had to develop solutions from scratch, for everything," Wood said. "We would get one component working, but when we moved onto the next, five new problems would arise. It was a moving target." 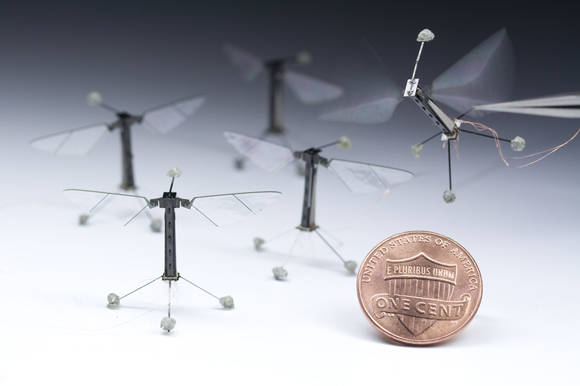 Two of the innovations the team came up with were a piezoelectric wing actuator and a method of laser-cutting the RoboBee's carbon fiber and polymer film body material in such a way that it naturally transforms from 2D to 3D much like structures in a kid's pop-up book.

"It's really only because of this lab's recent breakthroughs in manufacturing, materials, and design that we have even been able to try this," Wood said. "And it just worked, spectacularly well."

As might be guessed, tolerances at this tiny level were a bear to work out – the slightest deviations would cause prototypes to go haywire. One of the coauthors, Kevin Ma, told ScienceNow that even if the RoboBee's wings were the tiniest bit asymmetrical, the flying bug couldn't be controlled. But when he finally got it right, "It was an amazing feeling of having all of this hard work suddenly bear fruit," he said.

That was the team's "Kitty Hawk moment," Wood recalls.

The team still has a good deal of work to do before swarms of these little fellows can autonomously roam the skies. For example, they still require tethering for power and control, a limitation that may not be easily overcome.

Ma, however, is optimistic – he hopes to get power and sensors onboard before he graduates in two years, and create a swarm of free-flying RoboBees. ®