Tibetan blackbird not yet landed, but the end is in sight

My "Live Below the Line" quid-a-day nosh challenge has entered its final stretch, and as I wait for the Tibetan blackbird* to spread its mighty brown wings over the great white telephone, I've got time - and just enough remaining energy - to ponder what purpose the last week has served.

Before I do that, though, I'd like to share just how serious an impact one Brit journo off the beer could have on the local economy. Yesterday evening, I nipped out for a couple to hours to enjoy the spring sunshine, and dropped into a local bar to have a chat with my mate the owner.

Here's how the conversation went:

Owner: Hey, how's it going? Beer?
Me: No, I'll have a glass of water.
Owner: To wash the beer down?
Me: No, instead of the beer.
Owner: (Visibly disturbed) What's up?
Me: It's a charity thing. I'm off the beer.
Owner: (Beginning to panic as he visualises his kids' university fees evaporating before his eyes) But you'll be able to have a beer soon, won't you?
Me: Yeah, maybe in September...

Suffice it to say, I'll return tomorrow to explain the truth and for a couple of liveners, lest he's decided to end it all now and throw himself under a passing tractor.

Of course, the fact that the Live Below the Line challenge is only five days means any privation is only temporary, and mitigated by the knowledge that it will end. So, when I assembled my six euros' worth of nosh last weekend... 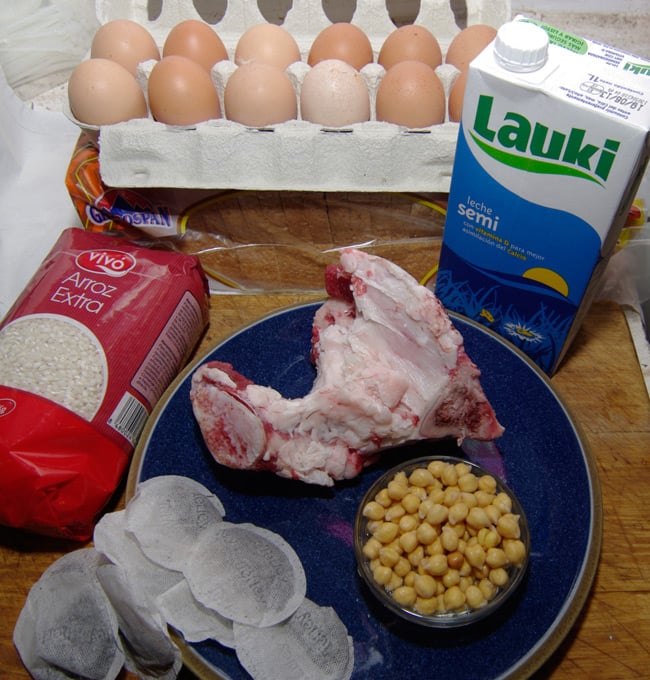 Most of my supplies for five days

...I knew that the following Saturday morning I'd be able to enjoy a nice cup of coffee and a bacon sarnie. Accordingly, I'm not pretending for a moment that a short period subsisting on chickpea stew and rice gives any profound insight into what it's really like to live in poverty.

But that's not the point. Live Below the Line describes itself as "an innovative awareness and fundraising campaign that's making a huge difference in the fight against extreme poverty". The experience has certainly made me think about just what I'd have to do to survive if I genuinely only had £1 a day for grub, while allowing me to raise a few quid for charity.

It's also had a knock-on effect on those around me. My 11-year-old daughter doesn't understand the concept of having practically nothing, but the last week has got her thinking. While offering to stick the kettle on for her poor old dad, she's been formulating a grand vegetable garden and henkeeping scheme so we can eat "for free" - the kind of thinking which can only be applauded.

I'd also like to offer a round of applause for those generous readers who chipped in in support of Malaria No More UK. My original fundraising target was £500, but we've sailed past £1,000, and there's still plenty of time to lend your support if you fancy it.

So, how did things go overall? Well, I think my choice of food for the challenge was fairly sound. It gave me enough to eat three meals a day, and I still have some stew, rice and a couple of eggs left for this evening's final banquet.

I've been hungry, but not debilitatingly so, and my decision to include tea in the budget was critical. Some light foraging helped the cause, and if I'd had more time, I'd certainly have gone in search of more of Mother Nature's bounty.

We've had plenty of lively debate over how I might have done better, and indeed just what was the point of the whole exercise, so I now hand it over to readers for their final conclusions. As for me, I'm off to boil the rice which will fuel me to the finishing line. ®

*Superb work there by reader Simon Ward, who advised us to "Google for aforementioned birdie's Latin name..."