Mooreslaw: Chopping up chips for the future

Something for the Weekend, Sir? While computer enthusiasts enjoyed something of a golden age of magazines in the late 1980s, with comic-book inspired titles like Bong! and Fart!, those who were lucky enough to be actually working in the field of business or government computing at the time were served by what could fairly be described as an aluminium foil age of worthy business computer papers.

These were challenging times for business IT journalists, precious few of whom had any computing qualifications but all happened to be in their early 20s - with the exception of The Guardian’s legendary Jack Schofield, who has been in his late 50s for the last 30 years. Back then, only the technical editor of an IT publication had any real computing expertise, unlike today when an average teenage office intern can often be relied upon to rewrite your JavaScripts, develop smartphone apps and hack into NASA in between making tea for the news desk. 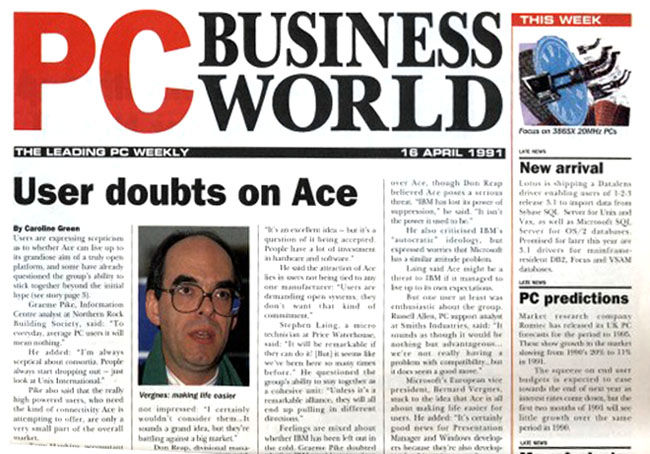 For a glorious nine months in 1987, I worked as editorial assistant at a short-lived computer magazine clumsily named PC Business World. You can almost imagine the publishers thinking that one up:

“Come on, guys, we need something that says it’s about these diddy Personal Computorators that IBM’s been making...”

“Nice one. Now we need it to smell like money”

“Ooh yes, but it also needs a bit of oomph to show advertisers we’re shifting paradigms.”

It was at this mansion of learning that I found out about Moore’s Law. Unfortunately no one told me who this Moore bloke was so I immediately conjured a mental image of Bobby Moore making predictions about processor speeds while sitting on Geoff Hurst and Ray Wilson’s shoulders.

A nerdier kid might have thought of Patrick Moore, but there you go. Where chaos reigns in my head, football rises to the surface.

As a child, I was fascinated how children’s author Norman Hunter could write books about Professor Branestawm and magic tricks, yet regale in the nickname of ‘Bite yer legs’ despite not writing anything on the subject of gnawing limbs. Still, looking back, ‘Bite yer legs’ was certainly a manlier moniker than modern day Luis Suarez’s ‘Nibble yer elbow’, so who was I to complain? 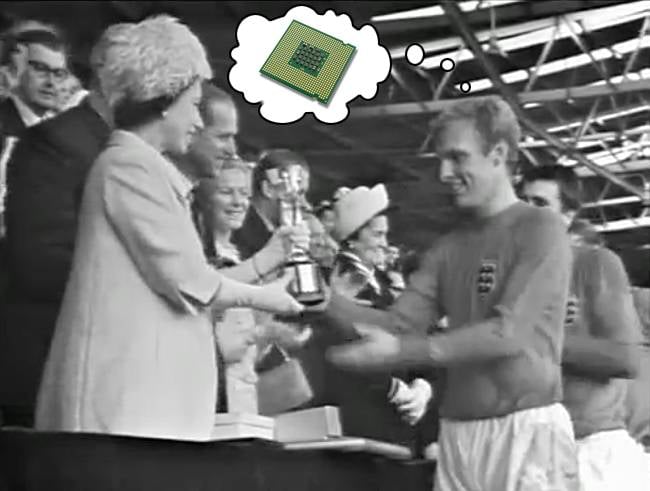 If only...
Photo Source: BBC

The weird thing about Moore’s Law has been its longevity despite all expectations. Even now, as industry experts insist the two-year cycle of processor speed doubling is at last over, nanowire transistors could keep it going to the end of the current decade at least. Just fantasy a couple of years ago, unlikely a year ago, in active development six months ago and being added to roadmaps as I write this, nanowire transistors take advantage of almost incomprehensibly short gate length by clustering under the transistors a ‘forest’ of nanowires which individually would be unable to carry enough current.

This is a bit more complex than the FinFets that El Reg reported on in March and so nanowire forest-based transistors will probably not end up in a computer near you very soon, at least not until someone can think up a cost-effective way of manufacturing them for the mass market.

When it comes to personal devices, I don’t mind waiting. How fast do you really need to play Angry Birds? I’m joking of course, but one event during my stint at PC Business World will forever stick in my mind - along with the burning question of how the 1966 final would have worked out if Hunter rather than Moore had been leased upon West Germany’s ankles, of course. The news editor was testing a custom-built sample of one of IBM’s then-new PS/2 computers by applying the usual benchmarks which, I was shocked to discover, included running a variety of video games.

He was playing a sideways-scrolling game involving a fighter jet taking off from an aircraft carrier and bombing ships and shooting down enemy planes. If memory serves, it was called Dambusters, and it had an idiosyncratic gameplay that permitted you to score points even by bombing your own ship as you took off and landed.

Suffice to say, the leap in clock speed from the typical 4MHz 8086 PC we’d been used to seeing to the 16MHz 80286-based PS/2 preproduction sample was insane. I was invited to try it out, only to discover that the usual minute or so to complete a level now whizzed across the screen in an incomprehensible whirl of 16-colour VGA in roughly two seconds. Linking everything to the clock no longer made sense.

So I don’t really feel the need for faster hardware, at least not yet. As an everyday user, what I want is faster, leaner, more efficient software on the kit I already have. Leave out the lard. Flay the fluff. Shave off the skeuomorphism. And most importantly, stick the background recording of analytics up your arse. ®

Alistair Dabbs is a freelance technology tart, juggling IT journalism, editorial training and digital publishing. He actually looks back on PC Business World most fondly but its stupid name has ensured that no online records of its existence can be found. Jack Schofield said that its journalists were not afraid of “calling a spade a bloody shovel”, so there.