The mega-explosive tale of a whale, boat, and dental crown

For over 100 years, scientists have been puzzling over the Tunguska Event, a massive explosion in Siberia that leveled the taiga for hundreds of miles around. Now a paper from the Russian Academy of Sciences suggests that the first physical remains of the blast have been found.

The explosion over Tunguska occurred on June 30, 1908, and had the explosive force of a 15-megaton nuclear weapon, shattering windows hundreds of miles away and lighting up the skies of the Northern hemisphere for days afterwards.

It's now thought that the explosion was caused by a meteorite or comet falling onto the planet and airbursting a few kilometers off the ground. There are also more far-out suggestions that it was a collapsing black hole, a chunk of antimatter, or an alien spacecraft crashing while trying to reach Lake Baikal – the largest body of fresh water on the planet.

The Soviets – once the civil war had been sorted out – started sending out expeditions, and in 1939 Soviet scientist Leonid Kulik reported that he'd found a glassy-looking stone which might be part of a meteorite. He was only able to publish one paper on it before the Nazis invaded, and when he died of typhus three years later in a German prison camp the sample was lost.

Now Dr. Andrei Zlobin from the RAS Vernadsky State Geological Museum has published a paper on samples he found on a trip to the Tunguska zone in the summer of 1988. By digging at the site of the explosion, and panning nearby stream beds, he collected over 100 samples of possible extraterrestrial origin, of which three look to be strong candidates. 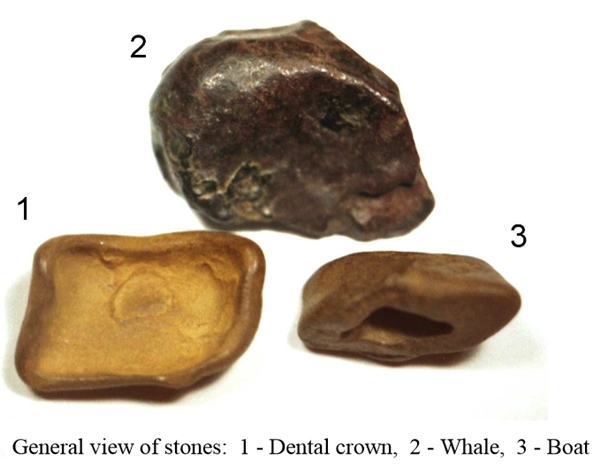 Possible visitors from the stars

Dubbed the "whale", "boat", and "dental crown" for their shapes, the quartz samples are only a few centimeters wide but display the hallmarks of having been subjected to the estimated 1,700K heat blast that would have been the result of the Tunguska Event.

The surface of all the stones shows evidence of melting, with distinct bubbles on the "dental crown" sample. They are also marked with regmaglypts – depressions and patterning on the rock's surface caused by them being bathed in explosively hot gases. In addition, among the other samples Zlobin found several "shatter cones", small conical rocks formed by meteorites and by man-made nuclear explosions.

It now looks likely that the Event was indeed a meteorite, but Zlobin is hedging his bets, saying it's possible the fragments were embedded in the ice ball of a comet and the surface patterning could be a sign that they have briefly gone from being very cold to very, very hot. To decide this, the samples must go in for extensive chemical analysis.

You might ask why it took Dr. Zlobin over 20 years to work through the 1.5kg bag of stones he brought back from the site – but his paper doesn't give a reason. True, the Soviet Union did collapse in the meantime and Zlobin may have been distracted with his love of Russian folk singing, but it seems like an awfully long time to let samples lie fallow. ®