The US military may have finally achieved its goal of powering a sustained hypersonic flight on relatively ordinary jet fuel, according to a report. 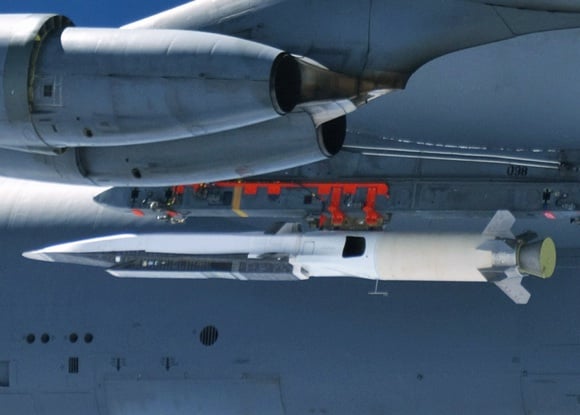 Aviation Week says that the fourth and final X-51A Waverider test missile was launched from a B-52 bomber mothership above the Pacific two days ago, and that it managed not only to successfully get its jet burning on JP-7 hydrocarbon fuel but maintain the burn for the full planned duration of boost - perhaps as much as five minutes - to achieve hypersonic speeds above Mach 5.

Normal ramjets top out at speeds between Mach 3 and 4, as they need to slow down the flow of air through the engine to subsonic speeds - and this causes drag to build up inescapably as speed climbs toward the hypersonic regime. A scramjet - supersonic combustion ramjet - is intended to maintain flame even with air blasting through it faster than sound, a feat traditionally referred to as being like trying to light a match in a hurricane.

Scramjets have previously managed this feat, and indeed have accelerated to Mach 10+, but this was achieved by using highly explosive hydrogen as the fuel. Hydrogen-fuelled missiles and aircraft are regarded as impractical for most purposes by the US military, however, and its boffins have long been engaged in the quest to make scramjets run on denser, easier-to-handle hydrocarbons.

The X-51A demonstrator was intended to achieve this. Like all ram and scram jets it can't even light up until air is being shoved into its intakes at high speed, so after falling off its B-52 carrier it is initially accelerated by a modified missile-boost rocket which then falls off. Once at ignition speed, the scramjet is lit up initially using volatile ethylene. Then once it is burning hot, it transitions to using JP-7.

That's the idea, anyway. Unfortunately all three previous X-51A flights have gone wrong. The first one saw hot combustion gases burn through partitions, prematurely wrecking the aircraft. The second hyperbird got as far as ethylene light-up, but then flamed out on JP-7 transition and plunged ignominiously into the ocean. On the last previous flight, a control fin inopportunely snapped off and the X-51A spun out of control and came to bits in midair.

But now it seems that the fourth time may have been the charm. There's no official announcement yet, but Av Week says that "the X-51A is thought to have experienced positive acceleration to speeds in excess of Mach 5 and run for the full duration of the planned powered phase of the test".

It was hoped that the X-51A would break Mach 6, but even so this does sound like the most successful test to date. We'll just have to wait and see what the US Air Force has to say for itself once it's ready to go public.

Even if the test was highly successful, however, there may not be any immediate appearance of new hydrocarbon-hypersonic weaponry or aircraft in the near future. The palmy days of War On Stuff budget bulge are over for the US military, and furthermore the immediate plan for hypersonics - the so-called "Prompt Global Strike" mission - never really made a lot of sense*.

That may not concern many Reg readers, but a lot of us might be sad anyway as working hypersonics would be a step down the road to more affordable space launch - and so to more activity in space by the human race. So we might all hope that the latest X-51A did well, at least. ®

*The idea is that the US president would be able, on hearing of someone or something urgently needing to be blown up before it disappeared or moved (terrorist chief, weapon-o-mass-destruction etc) would order the launch of a speedy hypermissile or hyperplane which would get to the target much more quickly than a normal weapon could. But even the speediest scramjet would be unlikely to be as fast as a ballistic missile hurtling around the world outside the atmosphere, and it would be a simple matter - compared to inventing hypersonics - to put a conventional warhead on an ICBM. So the prompt-strike mission doesn't really call for any new technology.

Many have argued that an ICBM launch, even if notified as a conventional one, might somehow trigger a nuclear war: but that doesn't make much sense. Space launches (which could easily be a mask for ballistic nuke attacks) happen all the time, as do firings of cruise missiles (which can easily have nuclear warheads) and indeed flights by strategic bombers (which can also carry nukes without trouble) - and nobody panics and starts a nuclear war.

Anyway if nations were inclined to panic over an ICBM launch, they would surely panic just as much over hypersonic ones.