With the completion of dish assembly, the new DSS 35 antenna under construction at Australia's Tidbinbilla Deep Space Communications Complex is ready for a delicate bit of manoeuvring: from its current position on the ground, onto its pedestal.

As the image below from the Complex's Webcam shows, getting the 34-metre dish from the ground onto its pedestal (completed in December 2012) won't be trivial. DSS 35 is one of two new antennae under construction, and should be operational by 2014; the second, DSS 36, will go live in 2016.

Planned, approved and budgeted before America decided to threaten to blow its economic brains out via the fiscal sequester process, the DSS 35 and 36 antennae were planned to support an expected “growth in deep space missions”. Additionally, NASA notes, the for the next decade or so, the southern hemisphere has a better view of many of the three dozen spacecraft the CDSCC supports.

The two antennas can transmit from the S band to the Ka band at up to 80 kW, and can receive signals equivalent to 1/20 billionths of a watt. 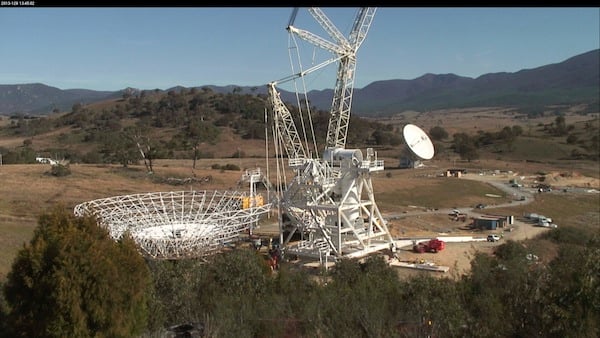 You break it, you bought it: the dish, ready to hoist onto its pedestal

NASA has Webcams for watching the construction process here and here. The agency expects the lift to take place around May 10. ®