Will creator Terrafugia soar – or crash and burn?

The flying-car designers at Terrafugia may be behind schedule getting their first commercial model off the ground, but they're already talking up their next big idea: a four-person hybrid car with tilting engines that allow for vertical takeoff and landing, which could be in production by 2025. 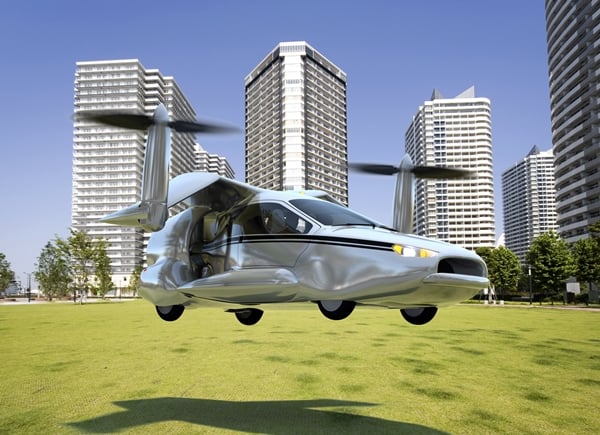 Electric path to the skies?

The company – formed in 2006 as a spin-off from MIT, and venture-capital funded – is four years late with deliveries of its Transition flying car; a two-seater with folding wings and a propeller on the back driven by an engine that runs on unleaded gas.

Flight testing of the Transition was carried out last year and the company claims to have 100 orders on the books, even with a near-doubling of its expected price to $279,000 per vehicle.

Nevertheless, the company has the next-generation model on its mind. On Monday it said it is investigating a new model, the TF-X, which uses twin tilting electric engines and folding propellers to take off and land vertically – a feat the company estimates will take about a megawatt of power, but will allow takeoff in less than 100 feet using an automatic flight system that the average driver could learn to use in five hours.

Once in flight and moving forward, the 300-horsepower rear engine will take over, and the electric motor rotors fold back for streamlined flight. The engine will also recharge the car's batteries and has a range of 500 miles on regular fuel – but the TF-X has a built-in parachute in case things go wrong. 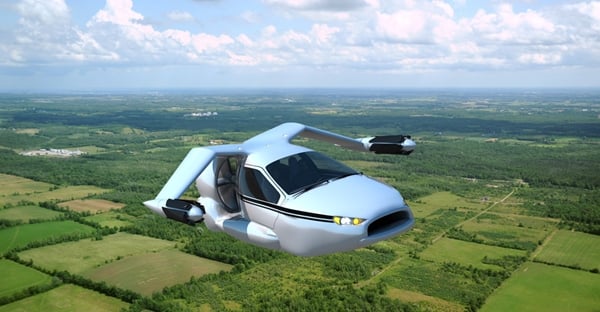 Just as in car commercials, there's never any traffic to be seen

Takeoff and landing are handled by computer control systems (hopefully with no blue-screens), and once on the ground the wings and their engines fold into the car's body and are masked by protective covers. The pilot/driver then tootles off on their errands and can refill the tank at the nearest gas station for the flight home.

Carl Dietrich, Terrafugia CEO/CTO said in a statement that preliminary discussions had taken place between the company and the FAA, and the agency had shown a "willingness to consider innovative technologies and regulatory solutions that are in the public interest." The Transition had shown the concept could work and the TF-X is the next stage, Dietrich enthused.

"We are passionate about continuing to lead the creation of a flying car industry and are dedicating resources to lay the foundations for our vision of personal transportation," he said. "Terrafugia is about increasing the level of safety, simplicity, and convenience of aviation. TF-X is an opportunity to provide the world with a new dimension of personal freedom!"

With great freedom comes great responsibility, and anyone who has driven more than a few miles on US freeways will recognize that putting some of these drivers in a push-cart is a bad idea, let alone in a flying car at 2,000 feet. Throw personal helicopters into the mix, and it's going to be raining men before very long – and not in a good way. 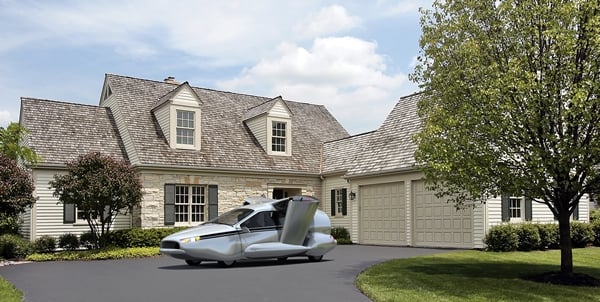 A challenge for the car thief of the future

Terrafugia is a more reliable company than most, however, and delays aside, the Transition is the closest thing we've seen yet that looks like becoming a final commercial product. The company appears to have solved airframe and engine issues, notably building a transmission system capable for switching from road to air use, and has jumped through the necessary official hoops to make the car legal and practical.

Under a deal with the authorities, Transition drivers will only need a sports license to fly, which only requires 20 hours of flight time and less exacting aeronautical knowledge. That vehicle has also been declared exempt from certain road safety standards by the US Department of Transportation.

Whether the authorities will be as receptive to the TF-X scheme is another matter. Terrafugia says it plans safety systems that would automatically land the hover-car if its pilot gets out of their depth. But there's a lot of bad drivers out there and El Reg suspects it's only going to take a few crashes by inept drivers to change the cry from "Where's my flying car?" to "Whose stupid idea was this?"

Then again, folks probably said the same thing about Wilbur and Orville, as well. ®