'Our card is the best out of all our unnamed rivals'

Micron is believed to be supplying its PCIe-format drives to EMC for the storage giant's XtremSF flash cards. (EMC's other supplier is Virident.)

Micron's P420m flash drive comes in both PCIe and 2.5in SSD formats; the latter model is a radically better performing product than the P410m flash drive, despite being built with the same 25nm MLC flash:

The read-write latency is less than or equal to 75μs and 15μs respectively, and Micron calls this "ultra-low latency". It isn't, not compared to SLC-based PCIe latency - as we shall see.

In its half height, half length PCIe format, the P420m contrasts the SLC P320h, which uses older 34nm NAND cell technology:

The P320h has a significantly lower latency that the P420m. 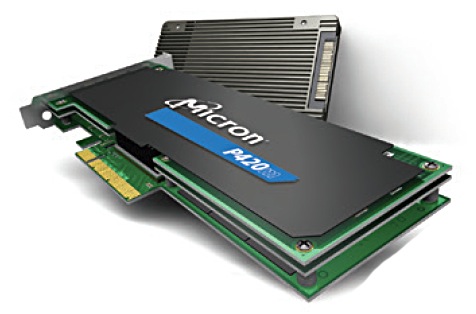 Micron says: "When tested against competing PCIe solutions in a MySQL server running an OLTP benchmark, the P420m is the fastest and most consistent performer, delivering more than 3,200 web server requests per second."

The Fusion-io's ioDrive 2's 1.2TB card is built using MLC NAND with a roughly similar cell size to Micron's P420m. Fusion specifies 2X NAND, meaning the process size of the chips is between 29nm and 20m. Its ioDrive's read-write latency is 68μs and 15μs respectively, slightly better than Micron's.

The ioDrive 2 does sequential reads at 1.2GB/sec, so Micron's competing hardware is more than twice as fast on this measure.

Although Micron is not revealing the P420m's endurance in its publicity material for the product - or on its website - a figure of 50PB written for the 2.5-in format product is quoted by StorageSearch.

Micron is sampling the P420m with production expected to begin in June 2013. ®