'Quantum network? We've had one for years,' says Los Alamos

Hiding its light under a concrete, titanium-lined bushel

The boffins at the Los Alamos National Laboratory are known as a secretive lot; a much understated lot, in fact. Rather than cause a fuss, researchers there have quietly published a paper showing they've had a flexible quantum network – something rather a lot of people are interested in – up and running for two and a half years.

Point-to-point encrypted quantum communications have been well-demonstrated as being possible over longish distances, but while Alice and Bob can talk to each other, a message can't be routed to Charlie, since the act of doing so destroys the integrity of the information. Metcalfe's Law states that the value of a network is proportional to the square of the number of connected users it has, so point-to-point is rather, well, pointless.

There are several companies and research groups working on this, but there's been limited progress so far. But the team at Los Alamos think it's cracked this with a hub-and-spoke design they call network-centric quantum communications (NQC), and report that it's easy to run, reasonably scalable, and runs on relatively cheap hardware.

To get around the problem of routing quantum bits, the NQC hub (named Trent) decodes the incoming message, transmits it to the new spoke, reencodes it and fires it off. It handles encryption key distribution, and the system maintains the advantages of quantum cryptography while dramatically increasing the value of the network by connecting more users.

The other advantage of NQC is that the quantum cryptography transmitters (QKarDs) needed at the user nodes to communicate with the hub are relatively simple. For its first generation network, Los Alamos built matchbox-sized hardware units containing a random number generator and a laser, and say the design is relatively cheap and suitable for mass production. 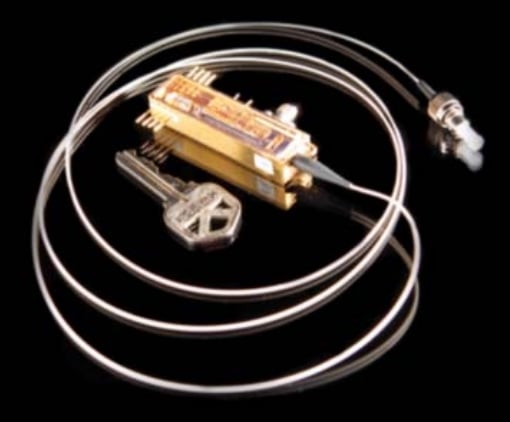 "In our NQC test bed, which we have operated continuously for 2.5 years, we have time-multiplexed Trent with three QKarD transmitters, Alice, Bob and Charlie, over 50km of single-mode fiber; larger numbers of clients could be accommodated with a combination of temporal and wavelength multiplexing," the paper states.

The hardware needed to run the operation isn't too onerous – the paper's authors say 100 QKarDs can be managed from a PC and more than a thousand if you use a server. The next-generation QKarDs will also include an updated quantum random number generator known as Velocirandor, which is capable of data rates well over 5Gbps.

It's not a perfect system. While it's relatively scalable within a locale, the hub and spoke system has inherent disadvantages on very large scales, and the authors acknowledge that if the hub is compromised in any way, the messages are insecure.

But it's a hell of a lot further along than anyone else is admitting to in public, and it's a credit to US national scientists and their sense of discretion that they kept it a secret for this long. As network bragging rights go, this takes some topping. ®