If you want to be 20 miles from the bleeding edge, come on in

Review Debian, the daddy to many a Linux distro including Ubuntu and Mint, has been updated for the first time in more than two years.

Codenamed Wheezy, Debian 7 actually brings the GPL operating system up to speed with some of its more famous offspring, though, true to its roots, Debian's stable release continues to focus on just that - stability.

If you're looking for a stable, rock solid Linux distro the new Debian will not disappoint. If you prefer to have the latest and greatest software on your machine you're better off sticking with more popular Debian offspring, such as the Ubuntu or Mint distributions.

Both Ubuntu and Mint start from Debian's unstable release channel and then add their own software on top. Mint offers a more direct Debian descendant that pulls from the somewhat stabler Debian testing, also the source of Ubuntu's LTS releases. While both add quite a bit to Debian's base offering, it's important to remember that without Debian there'd be no Ubuntu and no Mint.

For those who prefer the stable core of Debian without the cruft of Unity, Cinnamon or other downstream add-ons, Debian 7 is an important release.

There's no better way to see how Debian's emphasis on stability translates to the real world than a quick look at what's new in Debian 7. For the most part the distro's software and tools will be old news to anyone using Ubuntu, but that's by design.

Sometimes the stable-by-design approach is a good thing, but this does mean that Debian still has some rather creaky tools in it, such as the Linux 3.2 kernel, which was released in January 2012. The latest kernel is 3.9. More than just being a few releases behind, sticking with 3.2 means users may have trouble getting Debian to run properly on some of the latest hardware available - to say nothing of any hardware coming in the near future. On the plus side Debian 7 does, despite the older kernel, support UEFI installations on x86-64 hardware. 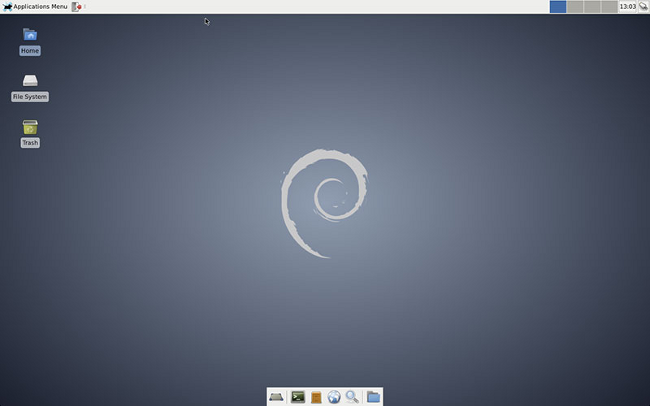 The default install gives you, among other things, an Xfce 4.8 desktop

The latest desktops available for Debian 7 include GNOME 3.4, KDE 4.8, and Xfce 4.8. The latest is a bit disappointing since Xfce is one of the best - and most popular - desktops for Debian and the latest version Xfce 4.10 has quite a few features that now won't make Debian's stable release for another two years. Likewise GNOME is now up to 3.8. But again, if this is the sort of thing that bothers you, Debian stable releases are not for you.

This is also the first Debian release to default to using ext4 file system rather than ext3, a leap most distros made quite a while ago.

Some years ago there was a popular joke among early Ubuntu adopters that "Ubuntu" was an ancient African word meaning "can't install Debian", but it's been some time since that joke had any basis in reality. Indeed Wheezy continues to offer a simple, if somewhat less flashy, graphical installer that walks even newcomers through the installation process with just as much hand-holding ease as you'll find in Ubuntu or Mint.

Seasoned Debian experts can, of course, choose a variety of installation methods including the good old command line.

Next page: Install it your way
Page: