If you want to be 20 miles from the bleeding edge, come on in

Install it your way

There are also numerous ways to install Debian, including the everything-and-the-kitchen-sink approach of downloading not just the installation CD, but all of the Debian software repositories as well. The simplest and most practical way to install, provided you have fast internet access, is the network install disk. If you go with the defaults you'll end up with a GNOME 3 desktop, though it's easy to add a sane desktop environment like Xfce.

Among the things you'll notice in a fresh install of Debian are updates for Iceweasel and Icedove, Debian's rebranded versions of Mozilla Firefox and Thunderbird, respectively. More remarkable changes come in the form of multimedia playback software libav, which replaces ffmpeg. Debian has given ffmpeg the heave-ho in favour of libav-tools, a libav fork, because, in the words of Debian developers, it is "considered to feature a more conservative release process and thus fit better to Debian's needs". 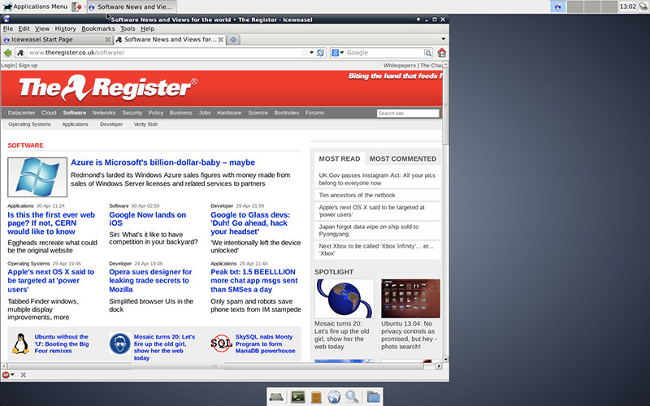 A fresh install of Iceweasel, Debian's re-branded versions of Mozilla's Firefox, is included

Swapping out some audio tools isn't nearly as big a deal as what libav-tools adds to the mix, namely baked in codec support for MP3 and AAC audio as well as H.264 video. In most cases that means installing third-party "restricted" packages shouldn't be necessary. Yes, it's true, Debian now has possibly some of the best out of the box codec support you're likely to find. And fear not, libav-tools has all the libraries you need for media playing apps such as mplayer and VLC.

While new codecs and file system changes may be the biggest thing users notice, for Debian developers Wheezy is probably most notable for the Herculean effort to bring support for multiple processor architectures (multiarch) to Debian 7: multiarch is an entirely new way of running 32-bit apps on 64-bit systems. It's disruptive because it breaks the long assumed ideal that, on Unix systems, the library and include paths needed by applications are at the same level in the filesystem hierarchy. In other words, with multiarch, apps that make this assumption break.

Given the potential pain, why bother? The Debian devs have a rather lengthy treatise on why multiarch is not just necessary, but actually good, that can be summed up as follows: 32/64-bit libraries can be seamlessly installed on the same system, "including future expansion for new architectures".

Debian supports a wide range of processor families - ARM, PowerPC, Itanium, IBM S/390, and others, along with the usual x86-compatible chips - so anything that helps make maintaining that support easier in the future will rank high on Debian's to do list.

Of course Debian is about stability, so while multiarch support long ago hit Ubuntu, Wheezy is the first Debian stable release with multiarch enabled. The effort put into multiarch also means there are a few things planned for Wheezy that were not finished in time for the final release, including full IPv6 support and large file support among others.

In the end, if you frequently play around with any of the various Linux distros that use Debian as a starting point, actual Debian updates look like yesterday's news. But if you need a rock-solid system, whether for a desktop, server or other workstation, one that won't constantly break things with half-baked updates and questionable new features, Debian remains the best choice and Wheezy is a welcome update. ®