Does a cloud have to be public, or can it be private?

Is "private cloud" an oxymoron? Or just plain moron?

The top brass at Amazon Web Services have been very clear since the launch of the e-tailers public cloud in 2006 that they do not believe in private clouds running in corporate data centers, and that to be a cloud, by definition, means being a shared public utility and not investing in servers, storage, switches, and infrastructure software. And AWS would even go so far as to say that over time public clouds will replace private data centers, and reiterated that public clouds beat private clouds at the recent AWS Summit in Sydney, Australia.

Few people operate their own electric, gas, and water utilities, so the idea that computing becomes another kind of utility is not completely far-fetched. However, companies like to hug their applications and data pretty tightly – the transactions you do and the data you store and process is your business, if you think about it – and it is hard to imagine that changing.

A recent survey done by RightScale, which sells management tools to bridge the gap between private and public clouds, indicates that no matter how much AWS may argue that cloud can only be public, enterprises have their own thinking on the matter.

With about 30 per cent of the survey respondents coming from the RightScale customer base, you would expect for a slight skewing of the results towards those who believe in hybrid clouds – a mix of computing on heavenly infrastructure (meaning virtualized and orchestrated) running on both private and public clouds. But 70 per cent of the 625 respondents to the survey were not using RightScale tools.

The results of the survey were published in the State of the Cloud Report 2013, which you can get here, and like other reports based on a relatively thin data set, you have to take them with a grain of salt and maybe a whole shaker.

The first thing you can see from the report is that most companies are doing something with cloudy infrastructure, one way or the other – or both at the same time:

Hardly anyone admits to at least not thinking about cloudy infrastructure

As you can see, only 8 per cent of those surveyed said they have no plans for cloudy infrastructure, regardless of what side of the firewall it is on, and only 17 per cent of those polled said they were in the planning phases. The remaining 75 per cent are running apps on what they consider clouds.

If you drill down into the data, test and development is by far the dominant use case for heavenly infrastructure, much as it was for server virtualization when it got its start on x86 iron a decade ago. Various kinds of web applications are also being tossed onto clouds, and mobile applications and big data are also starting to get some traction.

Most customers cite the speed of getting infrastructure, access to more scalability, and getting apps up and running faster as the main benefits of moving to clouds. As they get more comfortable with cloud and become heavier users of virtual and orchestrated infrastructure, they get less and less worried about security, governance, control, and compliance issues. That is not because heavy cloud users are capricious, but because they learn how to add tools to clouds to give them these expected features.

In general, the more dependent you are on cloudy infrastructure, the more you are impacted by outages. But the bigger you are, the shorter the outages you endure.

This is chalked up to experience and proper tooling. RightScale found that 32 per cent of beginners (who are just doing proofs of concept) had been impacted by outages in the past year, while 43 per cent of explorers (who are doing more than dabbling) were hit by downtime; 57 per cent of heavy cloud users had impacts from downtime.

The newbies averaged 5.8 hours of downtime per outage, compared to 5.5 hours for explorers and 4.6 hours for heavy users. The report did not say how many outages were recorded in a year, but even at one outage a year, this is pretty bad uptime. Four nines of availability is just under an hour per year, while five nines is a little more than five minutes per year.

In general, enterprises are a little bit ahead of small and medium businesses when it comes to cloud adoption, according to the RightScale survey, but only by a few points. Oddly enough, SMBs (companies with fewer than 1,000 employees) are more deeply into cloud computing, with 41 per cent saying they are heavy users compared to only 17 per cent for larger enterprises (those with more than 1,000 employees).

Here's where it gets interesting on the whole public-private-hybrid front. RightScale drilled down into the data for enterprises: 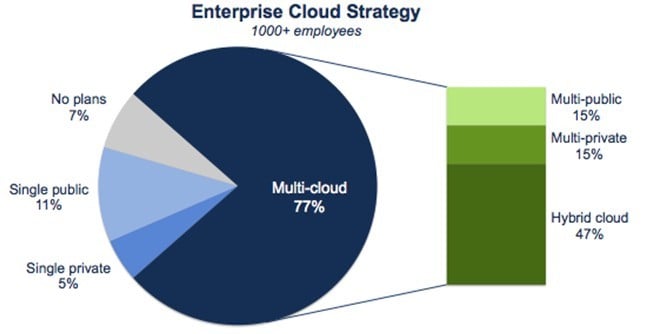 The majority of enterprises surveyed by RightScale expect to mix clouds

Interestingly, only 5 per cent of those enterprise shops polled said they were sticking with private clouds only, and only 11 per cent said they would pick a single public cloud on which to run their applications.

The issue, explains John Engates, CTO at AWS rival Rackspace Hosting, is more than just public versus private. Every public cloud – including the EC2 compute service at AWS and the Rackspace Cloud – has noisy neighbor problems and cannot guarantee absolutely consistent performance as virtual machines ride atop different vintages and configurations of hardware.

"Public cloud is a great general purpose platform, but when consistent and reliable performance really matter, then you sometimes need a private cloud," says Engates. "I just firmly do not believe that it is true that the only cloud is a public cloud. Some of our biggest customers are using private cloud quite effectively, and we have several thousand customers using hybrid clouds."

Maybe business is so good that Amazon Web Services can walk away from half of enterprise customers today, but if this becomes the normal way to do computing, then AWS may have to have a rethink. ®